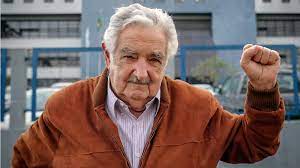 The former Uruguayan President, Jose Mujica, praised today that the development in Cuba of vaccines against Covid-19 will allow progress with immunization for the entire Latin American region.

Mujica praised the production of the vaccine candidate Soberana 02 in the third phase of testing during an interview with the Argentine radio station Radio 10.

"Now the Cuban vaccine appears, from a country punished and surrounded by a great power, to show that we Latin Americans can do important things," he said.

For the political leader, the Cuban vaccines "will remember the poor people of Haiti and Central America," about whom, he said, none of the dominant pharmaceutical companies "talk about because they are not good business."

""I am sure that Cuba's vaccine will remember the poor in Haiti and Central America. Nobody talks about them because they are not a business," José Pepe Mujica said.

When asked about the legal problem to release vaccine patents, he pointed out that the powerful companies are going to put all kinds of obstacles, but "the siege is being broken."

Mujica stressed the importance of public health and education systems, favoring science, taking care of its people and advocated that 'the State should multiply resources to make scientific-technical training massive, which is the substantive engine of societies."