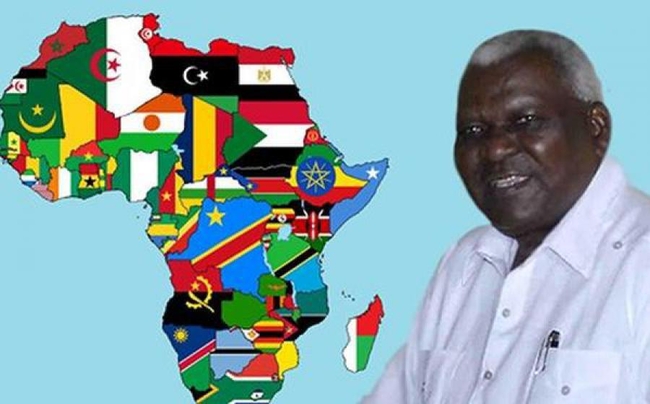 Message from the speaker of the National Assembly of People's Power of The Republic of Cuba, Mr. Esteban Lazo Hernandéz, addressed to the Pan-African Parliament on the occcasion of Africa Day.

Havana, 25 May 2021. On the occasion of Africa Day, a celebration that has a special significance for Cuba given the deep and unbreakable ties uniting us, I would like to express our sincerest congratulations extended to all the peoples of that dear continent. Without Africa, the history of Cuba could not be written, nor could the idiosyncrasy of the Cuban people be understood.

Over a million two hundred thousand Africans arrived in our country, uprooted from their lands by the despicable slave trade, and then became an essential element in the formation of Cuban nationality. During our independence struggles, their descendants were members of the Liberation Army troops, and out of them, many became our greatest military leaders.

A century later, over 300 thousand Cuban international fighters and civilian collaborators fought in African land, along with their brothers, against colonialism, domination, racism and apartheid. During this independence struggle, 2,289 made their ultimate sacrifice, their own lives. The ties uniting us are indestructible. Our heartfelt relations were cemented under the guidance and friendship of our historical leader, Fidel Castro Ruz, and many unforgettable African founding fathers.

In 1963, our country sent the first medical brigade to Algeria, and since then, solidarity and cooperation have grown and diversified themselves. Thousands of Cuban collaborators have provided their services in this continent, and over 30 thousand African students have graduated in Cuba from different specialties.

I seize this joyous occasion to express our deep and sincere gratitude for the countless demonstrations of solidarity received continuously from African soil. We appreciate the resolutions adopted by the African Union every year asking for the immediate lifting of the US criminal blockade, as well as every pronouncement made by governments, parliaments, political parties, and solidarity associations. We also are thankful for acknowledging the Cuban medical brigades of the Henry Reeve Contingent, by nominating them to the Nobel Peace Prize 2021.

Next June 23rd, Cuba will present again in the UN General Assembly, the resolution calling for the end of the genocidal blockade. We are sure that we will count on the united support of Africa, along with the almost unanimous support of the international community.

I take this opportunity to convey our firm solidarity for the terrible damages that the Covid-19 pandemic continues to cause throughout the world. From our position of underdeveloped country in this unequal world, we believe that cooperation and unity is the only alternative to confront the colossal challenges imposed by this pandemic to the humankind. For Cuba, the situation has become even more difficult due to the impact of the blockade, which has been brutally tightened in spite of the international sanitary crisis. The 242 coercive measures imposed by Trump are still in force, causing serious limitations to the Cuban people and government to face the crisis arising from this pandemic.

Nevertheless, Cuba Viva, sovereign and socialist, continues to resist confident of its victory. Despite of the blockade, new laboratories of molecular biology have been installed throughout the national territory, pulmonary ventilator prototypes and diagnostic kits have been manufactured domestically, keeping universal and free health care for the population. Our biotechnological industry has been able to develop five vaccine candidates against COVID-19, two of them are been applied already as part of a sanitary intervention program in risk groups and territories. We expect that 70% of our population be vaccinated by August.

In spite of the US aggressive media campaign against the Cuban medical cooperation, our country has kept its commitment of solidarity with the peoples of the world: 57 medical brigades of the Henry Reeve Contingent have been sent to 40 countries and territories.

Sisters and brothers: We salute with great satisfaction this plenary session of the Pan-African Parliament. We would like to convey our sincerest wishes of success in the interest of the continent’s development purposes and goals.

We reiterate our congratulations and wish you increasing prosperity and new achievements in the implementation of your great socioeconomic development projects, contained in the Agenda 2063, to which Cuba has given its unwavering support. For that purpose, as Fidel taught us, it will be indispensable to achieve the greatest unity in diversity, and fight for preserving peace. I am absolutely confident that a bright future awaits Africa.

¡Long live the brotherhood between Cuba and Africa!