Vaccination in Havana To Reach All Areas in Mid-June 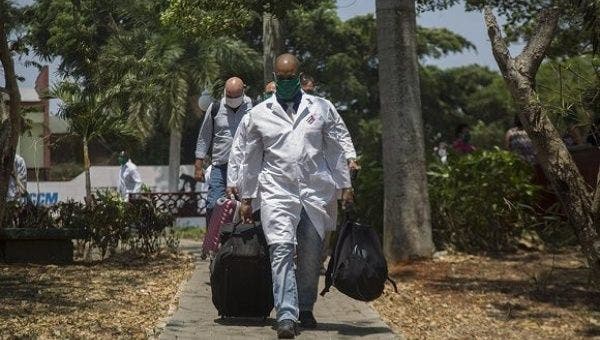 Given the complex epidemiological situation in Havana, it was decided to extend to all its municipalities; as of the second half of June, the sanitary intervention with the three doses of the Abdala vaccine candidate is currently being applied in at-risk groups and territories of the capital.

The information was made known at a meeting of the Prime Minister, Manuel Marrero Cruz, with the Provincial Council of the government of Havana. In addition, local political and administrative authorities participated.

The Minister of Public Health, José Ángel Portal Miranda, explained that the purpose of this immunization is that by the end of June, the totality of Havana's population to be vaccinated will have received at least one dose of Abdala, and more than 50% will have received two doses.

By the end of July, the totality of the capital's population to be vaccinated will have completed the three-dose scheme, said the head of MINSAP.

The Head of the Government of the Republic, however, warned that this measure could not mean a relaxation of the hygienic-sanitary measures adopted; "a vaccinated person can be a carrier and a transmitter of COVID-19," warned Marrero Cruz.

"We must remember"—he added—" that the entire population from 0 to 18 years old and thousands of other people who do not classify because they have different pathologies cannot be immunized for the moment. Therefore they will remain in a state of temporary vulnerability".

The meeting, which was moderated by the Governor of Havana, Reinaldo García Zapata, was attended by ministers and the first secretary of the Communist Party of Cuba in the capital, Luis Antonio Torres Iríbar, among others.

The meeting was based on the analysis of the results of a visit conducted by the Government's Temporary Group for the prevention and control of COVID-19, which was not only for control but also for accompaniment and exchange, explained the Prime Minister.

Nancy Acosta, head of the Office of Attention to Local Bodies of People's Power, explained that it was a visit to identify the reserves still existing in Havana in the confrontation against COVID-19, the fulfillment of current measures, and the reinforcement of them to counteract the pandemic.

At the closing ceremony, Marrero Cruz pointed out that "the current circumstances demand moving on to another moment of action, of greater effectiveness and efficiency, and for this, we have to review the working methods and reinforce the functioning of the provincial temporary group."

The tour included the ten municipalities of greater complexity at this time with the pandemic, worked with more than 200 entities, and contacted more than 3,000 people, in addition to exchanges with presidents of popular councils and district delegates.

The successful development of the health intervention that began in May in several Havana municipalities was recognized, which allowed the application, up until May 31, of at least one dose of Abdala to more than 700,000 Havana residents.

It was reported that between clinical trials, intervention studies, and the present health intervention, 1,021,104 doses had been administered in the capital between the two Cuban vaccine candidates by the end of May; of which 606,728 people have the first dose, and of these, 346,362 people have already received the second dose while 68,014 people have received the third dose.

When explaining the elements that justify the health intervention in Havana with the Abdala vaccine candidate, the MINSAP official clarified that both Abdala and Soberana 02 maintain outstanding quality results.

However, and given the high incidence of COVID-19 in the territory, in a sustained manner, which has created a complex epidemiological situation, it was considered that the Abdala vaccine candidate has a short application cycle (0-14-28 days). Furthermore, there is sufficient availability of the product due to an advance in its production that allows undertaking a sanitary intervention of such magnitude.