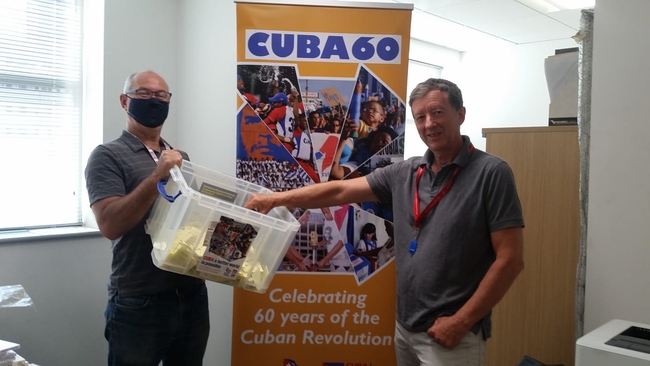 The grand draw took place this week at the CSC office in London, with the help of Unite London & Eastern Regional Secretary, Peter Kavanagh. The raffle raised nearly £20,000 for the Campaign and we would like to thank all our members and supporters who bought tickets this year.

CSC director Rob Miller said: “This has been the biggest CSC Blockade Buster raffle ever and I'd like to thank absolutely everyone who bought and sold tickets. Your support has been tremendous and will help enormously in out campaigning against the Blockade and for Cuban sovereignty. Viva Cuba!”

Peter Kavanagh, Unite LE Regional Secretary said: “It is a shame that Unite members have been unable to travel on delegations and brigades this year due to coronavirus. I can assure you that we are there in Cuba in spirit alongside our Cuban Sisters and brothers standing firm against the vicious US blockade and we will continue to support this struggle.”

Raffle winner Adrian Weir, on receiving news of his win, said: "That’s brilliant news. I can’t wait to get back to Cuba hopefully for May Day next year. Joining with millions of trade unionists from Cuba and around the globe is such an inspiring experience. I’m lucky enough to have been before but this win will mean I can start dreaming of another visit hopefully sooner rather than later."

The draw was delayed from 5 June to 8 June due to COVID-19 restrictions.