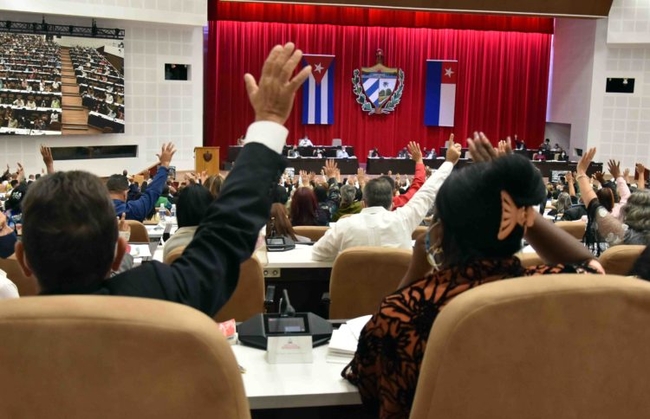 After an emotional and in-depth discussion, the National Assembly of People's Power unanimously approved the draft of the Family Code on Tuesday, to be submitted to popular consultation between February and April 2022.

The Minister of Justice summarized the main aspects of the legislative proposal, which strengthens family responsibility and updates family legal institutions, with an emphasis on love, human dignity, equality and non-discrimination.

Gender equality, the various variants of the economic regime of marriage and de facto unions, the safeguarding of the best interests of girls, boys and adolescents, are included in the Code, which also protects youth, the elderly and women. people with disabilities.

As part of the protection of responsible motherhood and fatherhood, the future norm expands the right to communicate in the family environment and advocates a family life free of violence, with a reinforcement of the harmonious resolution of conflicts.

Other advantages of the norm is the establishment of guarantee formulas for disadvantaged people, with solutions to transnational conflicts and a strengthening of the role of State bodies in protecting families.

The compatibility of Cuban legislation with the international treaties ratified by Cuba is another objective of the future Law, which was characterized as modern, respectful, inclusive and guarantor of human dignity, non-discrimination and human rights.

Silvera Martínez took a tour of the project's path, which responds to a constitutional mandate and is the result of an intense work of scientific research.

He gave details on the work to reach the 22nd draft of the code which was made public last September, and that served for a democratic exercise of specialized consultations, which included 47 institutions, organizations and groups, which issued almost 500 criteria, as well as 5,400 opinions received. of the population by email.

As a result of this exercise, most of its articles were modified, with important additions, mergers and deletions, the Minister explained, also highlighting the use of communication technologies throughout this process.

The latest version 23 was also improved based on proposals from the deputies, in a process that must continue through popular consultation.

The owner classified the project as consistent with the Constitution, by optimizing principles, enshrining values and completing a multidisciplinary vision around families.
The rich debate that followed ...

The first deputy to speak during the debate was Yolanda Ferrer, who referred to the contributions of Vilma Espín included in this Family Code. “She always looked at the family and emphasized that as an institution it is the mirror of society. Her advanced expression on this topic encompassed debunking stereotypes that remain in societies.

"She dedicated a lot of time to the consecration of this Code because she directed her work in the Federation of Cuban Women for many years to education for life," said Ferrer, who was convinced that as the poet Miguel Barnet said, love does not have sex, and considered this Code as a tribute to her memory.

The deputies lived an emotional moment with the intervention of Ofelia Milián Ortega, religious leader and member of the commission that wrote the preliminary draft of the Code. She appreciated that the elaboration work has been with open doors, from videoconferences to specialized consultations with religious leaders who thought different opinions. "That is the unity of the people even when there are different opinions," he said.

The construction of socialism is essentially an ethical project, explained Milián, as she stressed that “the important thing is that the value of justice is linked in the Code to the value of love, and both offer a full life. The approval will not immediately abolish all the cultural aspects that have always affected the Cuban family, but this Code is an advanced platform and it will help us to move towards the future ”.

For the deputy Enrique Alemán Gutiérrez, the best way that illustrates the validity of the referendum process that will take place with the Family Code is in Martí: "The truth is not afraid of the light", at the same time that he will make us perfect our blessed democracy.

As a respect for full dignity and equality without any type of discrimination, Mariela Espín described the bastions of the Cuban social system included in this Code, which is an expression of a gradual process of maturity reached by the Revolution in its social justice agenda.

"It reinforces the essence of Cuban socialism when it places people and families at the center of its benefits," she said.

“It looks like the society we live in, plural, diverse. It is not changing for fashion, but something that generates pain and deviates from Marti's maxim with everyone and for the good of all. It does not take away rights from anyone, but rather extends them to everyone. It is an emancipatory Code that seeks to raise peace and harmony to its maximum expression,” she commented before making a call to defend it with solid arguments and with our conscious participation in the referendum.

The poet Miguel Barnet was synthetic: “a mature and democratic example of this Assembly is to take this Code to a referendum. And that shows that this Revolution is not unai. Let's break down barriers and overcome prejudices. Let's tweet this apothegm from Marti: "Only love works miracles, only love saves us."

Reyna de la Caridad Torres Pérez described this Code as a Code that impresses, excites, makes proud and compromises, which resembles Cuba and is designed on the basis of our reality. “It will not only be for now or the immediate, but it will be for the future, tomorrow. Machismo or patriarchal behaviors cannot be erased all at once. This Code does not allow waiting, as the recently deceased poet Vicente Feliu sang.

The deputy Alberto González Suárez raised a doubt with article 149 on the custody and care of girls and boys, arguing that in the event of a separation the mother has priority in raising the offspring.

Oscar Silvera Martínez responded that it is a question of not privileging any legal solution from the design of the Law, because all families are different. We are migrating from that model, he explained.

José Castañeda Martínez supported the project and advocated explaining, substantiating and arguing the proposal in the popular consultation, as part of the improvement of the country's legislation and socialist democracy, as opposed to media campaigns to divide.

Popular wisdom and the sensitivity of our people will support the project, he said.

It is an extraordinarily revolutionary code, said Juan Carlos Rodríguez Díaz, who explained that Cuban families are the basis of our history, where the values and principles of society are reproduced.