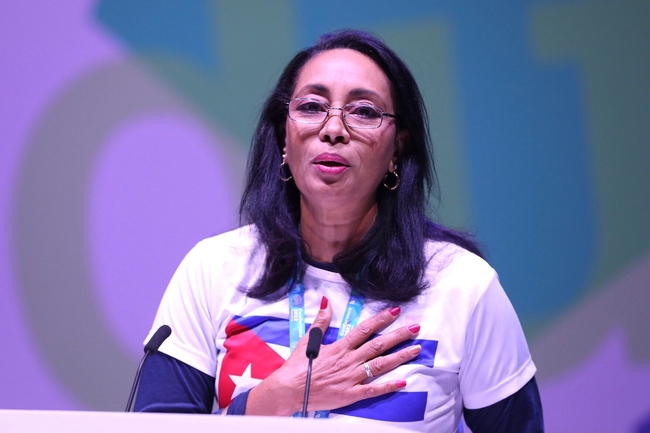 First of all, I would like to thank you for the invitation you have kindly extended to the organisation I represent, the National Union of Education, Science and Sport Workers (SNTECD) of Cuba, which is commemorating the 60th anniversary of its foundation; At the same time, I would like to say how pleased we are to participate with you in this important event.

In Cuba, those of us who lead a trade union organisation at any level have the important task of representing the interests of our members and at the same time the interests of our Revolution. These naturally complement one another and come from our pride in expressing our members’ moral strength, abilities and experiences to push forward objectives that the membership agrees at every stage.

We have put all our efforts into encouraging a participatory democracy, the promotion of the role of workers in the advancement of the policies of the Revolution in education, the strengthening of the influence grass roots trade union leaders and the full development of their capacities, mobilising them for the struggle, for the noble objectives pursued today for the improvement of educational work.

The achievements of education in Cuba are the result of a long road of transformations which, since the triumph of the Cuban Revolution, has focused on the human being, childhood, adolescence, youth and adulthood, and offers the possibility for the entire population to have access to education absolutely free of charge.

The main author of this strategy was the leader Fidel Castro Ruz, who in his famous speech ‘History Will Absolve Me’, defined the main problems that afflicted Cuba before January 1959, among them education, which he tackled together with the new Government and the Cuban people, to achieve what today is a social gain and a right for all.

The most important battle of those early years was the Literacy Campaign. In 1960, an army of literacy educators with lanterns and primers in hand went to the remotest places of the country so that not a single Cuban would be left without knowing how to read and write. As a result, on 22 December 1961, Cuba was declared the first illiteracy-free territory in the whole of the Americas. Six months earlier, the Law for the Nationalisation of Education had put an end to private education and archaic educational methods to make way for a new way of educating.

The Revolution brought opportunities for many people who, due to their low economic income, could not access any educational centre, and premises were opened first to expand the network of institutions, and then new schools for all subjects were opened throughout the country.

Like all countries, Cuba has experienced the negative effects of the Covid pandemic. But I am pleased to say that we have managed to control the situation thanks to the action of our wonderful Cuban scientists who have been able to develop our own set of vaccines that have allowed us to immunise the population from the age of 2 years upwards. Regulatory measures to control Covid are still in place today.

The negative impact of the blockade and its extraterritorial component was made worse and even crueller in the context of fighting the COVID-19 pandemic. The blockade has hindered voluntary solidarity donations, sought to hinder the development of Cuban vaccines and limited the possibilities of access to medicines and basic supplies.

The period 2020-2021 was marked by the setback in bilateral relations between Cuba and the United States and included a progressive tightening of the blockade. In 2020 alone, 55 new measures were applied against Cuba, which increased to 243 the extra sanctions imposed by the Trump administration and which remain in force today.

The numerous regulations and provisions issued by the US government against Cuba have reached unprecedented levels of hostility. Lawsuits filed under Title III of the Helms-Burton Act; the increased targeting of financial and commercial transactions in Cuba; the ban on flights from the US to all Cuban provinces except Havana; the targeting and intimidation of companies that send fuel supplies to Cuba; and the smear campaign against Cuban medical cooperation programmes are some of the most notable examples. These affect all Cubans inside and outside the country.

The blockade is a measure that violates international rights, interferes in the internal affairs of the island of Cuba and violates the principle of the independence of a nation and the human rights of Cubans.

Every year the Cuban government allocates a considerable amount of financial, material and human resources to guarantee the right to education; the State allocates 155,478 million pesos to Education, which represents 69% of the budgeted activity, however, the services it provides are seriously affected by the economic, commercial and financial blockade. These are translated into daily shortages as a result of the fact that Cuba remains without access to the US market and the means to obtain the material basis for study and life, the furniture and equipment essential to carry out the educational and teaching process with high quality.

In the field of Early Childhood, this blockade has a negative impact, since the printing of workbooks for the teaching and learning process in Pre-school is limited due to the impossibility of acquiring raw materials such as paper. The allocation of toys and teaching materials for kindergartens has also been limited by having to buy them abroad from distant markets.

It is a particularly cruel aspect of the blockade that affects our Special Education services. These require a wide range of resources for the comprehensive care of students with special educational needs, whether or not associated with a disability, so these resources are very necessary and their lack has a negative impact on the achievement of educational goals, and the objectives of this education, to ensure the full social inclusion of students.

It has not been possible to acquire vital equipment such as electric wheelchairs for children who, due to their particular needs, cannot use a conventional wheelchair. This equipment is , generally acquired via donations, or it is necessary to import them from more geographically distant countries at a very high price.

At this point I would like to thank once again the National Education Union for the donation of more than 40 Braille machines to Cuba in recent years.

In regular Primary and Secondary Education, we lack basic supplies, including paper for printing books and materials. We do not have enough computers and televisions for the teaching-learning process, nor the parts needed to repair those that are worn out by continued use due to the impossibility of acquiring them at a lower price.

In arts education, it has not been possible to buy musical instruments such as guitars, keyboards, maracas, flutes, audio equipment, among others. It has also been difficult to acquire literature by English-speaking authors and specialised English dictionaries for the subject of English.

In higher education, there is a shortage of resources and reagents for physics, chemistry and biology laboratories, affecting the replacement or repair of equipment and tools in laboratory facilities.

In the case of our union, the SNTECD. Our work is also affected by the impact of the blockade on the need for computers, transport, stationary, phones, furniture and others.

These are just some of the examples of the problems we face, mainly caused by the US blockade of our country.

It cannot be right that the education of children is so affected by the decisions and actions being taken by the United States Government.

But despite all these difficulties, we have been able to count on the support and solidarity of friends like you here in the National Education Union, in many other British unions, as well as our friends in the Cuba Solidarity Campaign. That is why solidarity is so important and I take this opportunity to thank you on behalf of the National Secretariat of Education, Science and Sport Workers and its more than half a million members, for all these years of united and cooperative work between our organisations. We are ready to continue the exchange of solidarity with all of you.

I would like to thank you very much for your visits to my country and for recently sending around 8000 musical instruments through the Play For Cuba Campaign in 2018.

I want to thank you for your new efforts with the Viva la Educacion appeal, which will also provide resources to our children, teachers and union organisers. This will be an important contribution to the service of education in Cuba.

Friends and colleagues, on behalf of Cuba and the trade union that I represent, we wish you every success in your daily work, both at this conference and in the actions that you carry out with your members.

Finally, I would like to take this opportunity to make this special presentation to all members of the National Education Union. This is a special medal that has been produced on the 80th anniversary of our own CTC, this is the equivalent of your Trade Union Congress. This I now present to you in recognition of your wonderful work of solidarity with my country.