Summit: Bolivia Rejects US Argument on What Is 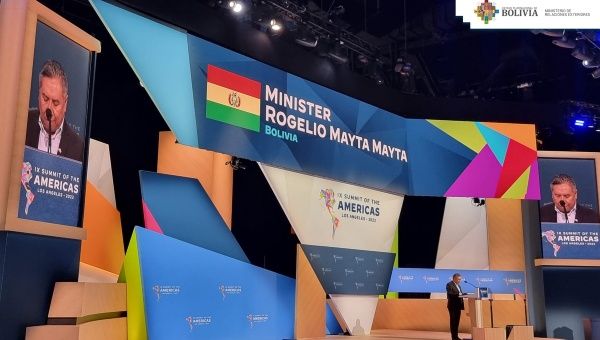 Bolivian Foreign Minister Rogelio Mayta rejected on Friday at the IX Summit of the Americas the qualification of "non-democratic" countries used by the U.S. to exclude Cuba, Nicaragua and Venezuela from the continental meeting.

"We reject the unilateral qualification on which country is or is not democratic, because it is arbitrary, it is anti-democratic in itself despite the discourse that seeks to justify it," said the foreign minister in his speech to the plenary of the summit.

RELATED:
Summit of the Americas, a Failure Before It Started: US Experts

The authority recalled that the Bolivian president, Luis Arce, did not attend the event because not all the region's countries attended and regretted that the continental platform had ceased to be a meeting of integration.

"Although it is called the Summit of the Americas, there are countries that were excluded," he said.

The foreign minister also questioned who decides what happens "in our common home" and recalled that exclusions undermine "the spirit of the UN Charter and other fundamental documents for international relations."

The exclusion of Venezuela, Cuba and Nicaragua is "a return to a gray past," he said.

Mayta insisted that "Bolivia demands respect and claims the principle of non-intervention in the internal affairs of States."

Therefore, the Bolivian representative demanded respect and non-intervention in the internal affairs of the countries of the region.

CRITICISM OF THE OAS

"Unfortunately, neither the OAS nor its General Secretariat is today guarantors of institutionality, the rule of law and respect for human rights," said Mayta.

The government of Luis Arce and the ruling Movement Toward Socialism (MAS) have always questioned the work of the OAS in the failed 2019 elections that gave as a winner, the then head of state Evo Morales for a fourth term.

In the early hours of November 10, 2019, the OAS released the results of an audit that detected "very serious" irregularities such as manipulation in the computer system of transmission and computation of results, for which it recommended new elections.

"In our painful experience, the OAS participated in events such as the coup d'état that occurred in Bolivia in November 2019, which consolidated a de facto government based on the violent repression of social protest, with the use of lethal force that ended the lives of dozens of Bolivians who criminally and against democracy were killed," said the foreign minister.

Likewise, the Foreign Minister recalled that the hemispheric body was asked for information on the audit "not once, not twice, eleven times so far, but there is no transparency in the OAS of (Luis) Almagro."

"Bolivia is still waiting for an honest and impartial investigation on what happened in this alleged electoral audit," he added.

The IX Summit of the Americas, held for the first time in 1994, was marked by absences and concluded with a declaration focused on returning undocumented immigrants to their countries of origin.