The struggle is not over 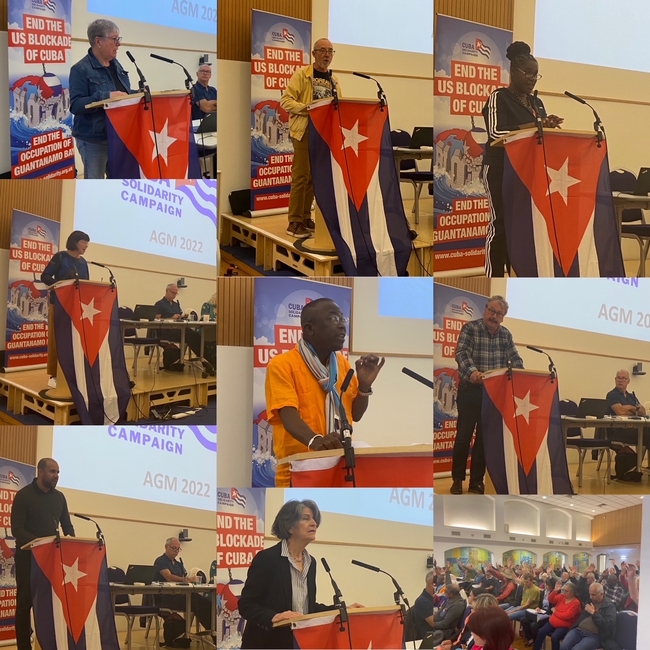 “There is no better place than this meeting in the presence of CSC members to thank you for so many years of dedication,” said Elizabeth Ribalta addressing CSC’s Annual General Meeting on 4 June. Cuba’s Institute for Friendship between the Peoples’ (ICAP) representative presented the organisation’s 60th anniversary award to Diana Holland (CSC chair) and Bernard Regan (National Secretary). She thanked members for CSC’s she40 years of solidarity and said “we know we can count on you for the next 40 years.”

Moving the annual report, CSC director Rob Miller summarised the work that CSC has continued to do during the pandemic, including producing CubaSí, contact with members and affiliates, appeals which raised £150, 000 of medical aid, online meetings, 42 official Nobel Peace Prize nominations and much more. He paid tribute to the trade unions and CSC local groups who “are the backbone of this organisation and organise events and fundraising” which help keep the campaign going as we receive no grants or large donations.

Cuban ambassador Her Excellency Bárbara Montalvo Álvarez gave a brief overview of the situation in Cuba, which she described as being difficult. “We have to spend a lot of time going from one place to another; to buy food, to do anything; we have high inflation; there are shortages of many things; there are interruptions in the power supply.”

Despite these hardships she pointed out that Cuba continues to “provide all services in our health centres. We have not closed a single educational centre, at any level, neither arts education, nor special education for children and adolescents with special needs and disabilities.”

Although she said there were domestic shortcomings which were openly discussed and criticised within Cuba, the key responsibility for shortages lay firmly with the blockade which is “aimed at suffocating our economy.”

“Failure to carry out essential maintenance work; difficulties with the replacement of key parts; delays in the national production of medicines that depend on materials from abroad... All this is due to the blockade. Any contract can be cancelled unexpectedly,” she said, pointing to the lung ventilators which had been ordered for Intensive Care Units before the pandemic. The company which provided them suddenly cancelled the contract, leaving Cuba with a shortage of ventilators just as the pandemic hit.

The ambassador listed numerous examples of how the blockade impacted on the health of the island, from taking four months to find a replacement part for the country’s only oxygen-producing plant, to the cancellation of the gas supply for children’s asthma inhalers.

Like many countries, Cuba was suffering from inflation due to increases in international prices; however, as Bárbara pointed out, “which other country in the world is under the sanctions regime that Cuba has been suffering for more than 60 years?”

She thanked CSC members for their invaluable work and gave a rallying call to continue the fight: “We remain a country under siege. But we are not a paralysed country, a country that laments and does not react. The struggle to lift the blockade is not over yet.”

Alpha Kane recalled a poster in the Abel Santamaría School for Blind and Visually Impaired which read: “give me freedom, challenges, independence, and love. Do not give me overprotection, sympathy and pity.” Executive member Lesley Ohene-Djan, who had been on a delegation to Cuba in 2019, said that it was amazing to see what Cuba was able to do with minimal resources, and called for people to support the appeal in whatever way and with any amount they could.

Moving the motion on the updating or Cuba’s Family Code, Carole Regan said that although the original 1976 code had been an achievement for women’s rights, it now needed updating and the draft new code contained many proposals which challenged traditional ideas of what family is.
In support, Mike Jackson said that if passed, the code would mean Cuba could be a world leader in LGBT+ rights as well. Miriam Pallacios, a member of CSC and a Cuban resident in the UK, spoke in the debate and said she was glad that it had been raised since it showed Cuba’s revolutionary development moving forward.

Speaking on local groups, Gordon Calliste, chair of East London CSC, said that he thought it was important to try to increase the number of CSC’s local groups, but this did not prevent members from going to whichever group meetings they wanted or groups from working together.

After discussion all motions were passed, the Annual Plan and Financial Report were passed, and 36 new members of the Executive Committee elected.

In the rally to mark 60 years of blockade, and 60 years of solidarity and friendship, speakers were interspersed with short films about how US sanctions had impacted on Cuba’s ability to respond to the pandemic. Mike Jackson, Secretary of Lesbians and Gays Support the Miners, recalled how he had taken part in International Day Against Homophobia events in Havana in 2018, including taking a replica of the original LSGM banner which had taken pride of place at the front of the conga. He contrasted his experience in Cuba to his early years on pride marches in the UK in the 1970s with police cordons on either side. He noted that IDAHO was promoted by Cuban government institutions and that the NUM first supported LGBT rights (in a motion at the TUC in 1985) long before the British state did. He also welcomed the fact that Cuba had become the first country in Latin America to mark LGBT+ History Month in May.

Elizabeth Ribalta gave a powerful presentation in which she stated that the global pandemic had shown the “true face of capitalism.” Its inability to deal with the global health crisis had been “truly disturbing,” she said. The challenges had been doubly difficult for Cuba, with the aggressiveness of US policy having unprecedented effects on the Cuban economy’s ability to meet the basic needs of the population and causing “suffering and discomfort to Cuban families.”

“In addition to the suffocating economic measures we have suffered, the media war, the campaigns to discredit us and the fake news are still ruthless to this day.”

She condemned the “destabilisation attempts promoted and organised from the US” and said that Cubans would not “surrender our sovereignty or our independence.”

Contrary to what some people were trying to impose, “we will not have more democracy if we allow our Revolution to be dismantled. We will not have a better country by renouncing the construction of our alternative social project. We have an enemy that is trying to seduce us with its siren song. The enemy is waiting for the right moment to erase our culture, our identity, our years of struggle and our hard-won achievements.”

Once again she thanked CSC members for the humanitarian aid which she described as “the most genuine expression of love and loyalty.”

“Every anti-blockade motion passed, every letter sent, every statement issued, every denunciation, every demonstration, every caravan, every fundraising campaign, every donation is a constant blow to the iron fist of the blockade.”

Cuba wishes to “live in peace and solidarity with the other peoples of the world” she declared, and called for continuing solidarity: “Our struggle is more bearable and we are more resistant if we have the support and accompaniment of friends like you.”

Chair Bernard Regan introduced the final speaker, National Education Union Joint General Secretary Kevin Courtney, as a long standing supporter and activist. Kevin had just returned from a delegation to Colombia where he had met campesinos abandoned by the state with no education. This could have been Cuba’s future without the Revolution, he said. “Colombia gets huge grants for military aid to stop the spread of social justice. Cuba gets a blockade for trying to spread social justice.”

“The idea that Cuba is a source of terrorism is laughable. It’s a guarantor of the Colombian peace process!” he said, referring to the US government’s placing of Cuba on its list of ‘State Sponsors of Terrorism.’

He described the blockade as “a human rights scandal on a grand scale”, only maintained by the US because Cuba was an inspiration in the region that another world really is possible. 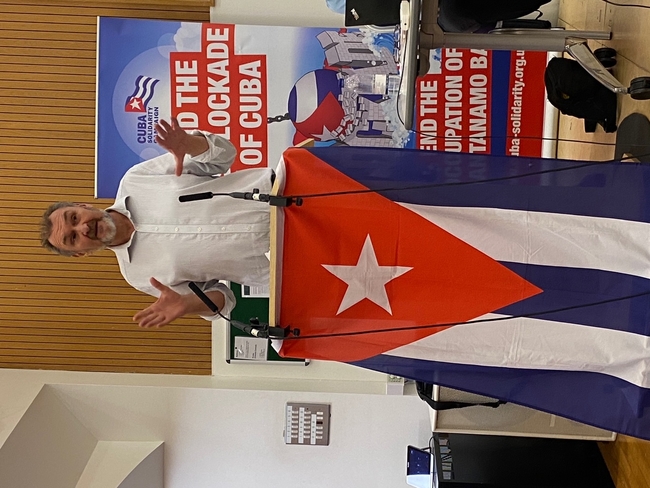 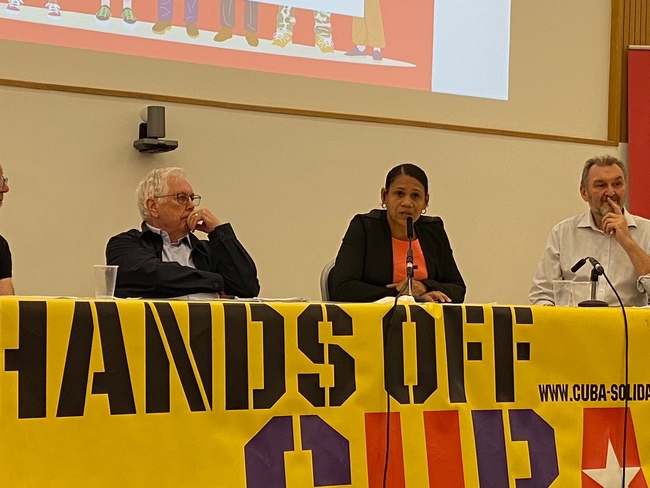