Summit of the Americas: No to the Monroe Doctrine 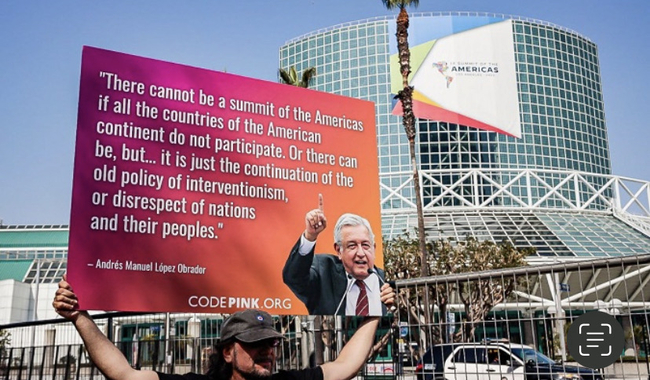 “As president, I will promptly reverse the failed Trump policies that have inflicted harm on the Cuban people and done nothing to advance democracy and human rights.”
Joe Biden’s election campaign promise (March 2020)

Joe Biden’s illegal, unilateral and clumsy decision to exclude Cuba, Venezuela and Nicaragua from the Ninth Summit of the Americas brought about a generalised revolt in the republics south of the Rio Grande and an embarrassing foreign policy mess for the US government.

The decision, announced in January 2022, was received by a torrent of criticism, including threats of no attendance from Latin American presidents (notably Mexico’s López Obrador and Brazil’s Bolsonaro). US officials immediately mounted a series of damage limitation exercises. On 10 May 2022, Jen Psaki, outgoing US government’s spokesperson, told journalists that no formal invitations had yet been sent.

Facing pressure from Republican Party hardliners (Marco Rubio, Ted Cruz and others) and within the Democratic Party itself (Bob Menendez, chairman of the powerful Senate Foreign Relations Committee), on 5 June a US State Department official, under conditions of anonymity, confirmed the US unilateral exclusion of Cuba, Venezuela and Nicaragua.

Latin America’s revolt was unprecedented in scope. Mexico’s foreign minister, Marcelo Ebrard, in his speech to the Summit pointed out that of the 32 countries participating, 20 condemned the exclusion, 10 did not express a view or abstained, and only two supported it (Colombia’s Duque, whose abject submissiveness to and complicity with US foreign policy knows no bounds, and the US, of course).

The US, as host to the 2022 Summit in Los Angeles, has no right to exclude any other nation, regardless of its own political preferences. At the Summit Ebrard stressed this: “Nobody has the right to exclude another country whatever the reason, even less due a political difference over their political system.”

The exclusion is baffling since the US knows the strength of feeling about arbitrary exclusions from summits and even more so about the US blockade against Cuba and now Venezuela. In the 2012 Summit of the Americas held in Colombia, Latin American leaders made clear to Obama their rejection of Cuba’s exclusion. Obama yielded and invited Raúl Castro to the next summit in Panama in 2015, where the US president promised to “turn the page” since it was time “to engage the Cuban government.”

Apart from the presidents of the excluded countries, Díaz-Canel (Cuba), Maduro (Venezuela) and Ortega (Nicaragua), other presidents who did not attend the Summit in protest were not only those on the left, López Obrador (Mexico), Luis Arce (Bolivia) and Xiomara Castro (Honduras), but also right wingers Giammetti (Guatemala), and Bukele (El Salvador).

Argentina’s president Alberto Fernández, who did attend, expressed the collective view of the region when he addressed President Biden directly: “the years prior to your arrival in government were marked by an immensely harmful policy for our region deployed by the administration that preceded you. It is time for those policies to change and for the damage to be repaired.”

Latin American presidents also used the Summit to highlight the unspeakable role that the Organisation of American States (OAS) had played in the 2019 coup in Bolivia. Though not named, everybody knew it was also about the disgusting activities of its Secretary General, the infamous Luis Almagro. Almagro supported the false claims of electoral fraud and speedily recognised the de facto Añez government. Worse, he did not utter any pronouncement about

Añez’s repression, persecution and the massacres of innocent civilians resisting the coup.
Speaking at the Summit Eduardo Enrique Reina, Honduras foreign minister, said “interventions like those that took place in Bolivia are not helpful for the promotion of democracy.” Argentina’s Fernández had the strongest words: “The OAS has been used as a gendarme that facilitated a coup in Bolivia. […] If the OAS wishes to command respect and return to be a regional forum for which it was created, it must be restructured, removing immediately those who [currently] run it.”

The exclusion made US sanctions the main focus of the Summit’s discussion. Many heads of state or foreign ministers criticised the US for the application of unilateral coercive measures against Cuba and Venezuela.

Johnny Briceño, Belize prime minister and chair of CARICOM (15 Caribbean nations) said, “The illegal blockade against Cuba is an affront to humanity.” Marcelo Ebrard added: “It’s incredible that at this stage we continue to see blockades, embargoes, and sanctions, even during the pandemic, against countries of the Americas, in violation of international law.” Fernández further added: “Cuba endures a blockade for more than six decades imposed during the Cold War years and Venezuela endures another, at the same time that a pandemic devastates humankind taking millions of lives […] With measures like this the aim is to subjugate governments but in reality, they only end up harming the people…”

Asked about his decision to boycott the Summit during a daily press briefing on 6 June, Mexican president López Obrador said: “How is it that a blockade is maintained that prevents food from arriving to the Cuban people, that prevents medicines from arriving?”

“That is a type of genocide,” he said, describing it as “a tremendous violation of human rights.”
In typical resilient mood President Díaz-Canel said of Cuba’s exclusion: “We are honoured to head that list, alongside the leaders of Venezuela and Nicaragua”.

The Summit has convinced the majority of Latin America’s heads of state that the way forward is to develop regional bodies such as the Community of Latin American and Caribbean States (CELAC) and Union of South American Nations (UNASUR) without any US involvement. We hope this leads them to ditch the OAS, the “US Ministry of Colonies”. More importantly, it has convinced many of them to place the battle against the blockade central to both their national and regional agendas. US imperialism is thoroughly unreliable and treacherous, and, now that it suffers severe decadence, it can turn its lethal aggression against any of them at any moment. In 1962 when Cuba was expelled from the OAS because, “the principles of communism are incompatible with the principles of the inter-American system”, the only country that opposed it was Mexico. The 2022 Summit of the Americas shows how far Latin America has come getting closer to Cuba, with most nations opposing the blockade.

The Summit was a failure. Eight presidents boycotted the conference in a clear loss of US hegemony. “What we are seeing is an empire which is losing its power,” said Sacha Llorenti, secretary of the Bolivarian Alliance (ALBA). Desperate to increase the world oil supply, the US are formally talking to president Maduro and failed to invite Juan Guaidó, who they “really” recognise as ‘interim president’ of Venezuela.

Gustavo Petro, who was elected president of Colombia on 19 June, is also opposed to the blockade. Lula, the likely president of Brazil after the coming October 2022 election, has made his views crystal clear: “Enough of blockade against Cuba. US, cease the aggression and take your Monroe Doctrine and your blockade back home and bury them for good.” Thus has spoken Latin America.

Dr Francisco Dominguez is a senior lecturer at Middlesex University, where he is head of the Centre for Brazilian and Latin American Studies. He is also a CSC executive committee member.