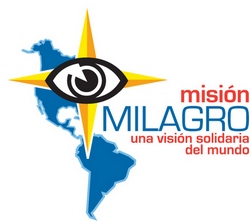 Operation Miracle is exactly what its name says

Havana 6 June: THE number of Latin Americans who have had their vision restored since the start of the Cuban Operation Miracle program nearly two years ago is approaching a quarter million.

Through this joint program with Venezuela, low-income people of the region are undergoing surgery free of charge along with all required medicines before, during, and after the procedure.

According to calculations by the World Health Organization, there are 50 million blind people worldwide, of whom more than 1.5 million are children under 16. In Latin America and the Caribbean, there are more than 4.5 million individuals suffering from preventable blindness.

Specialists at the Cuban Ramon Pando Ferrer Institute of Ophthalmology in Havana told Granma that although the majority of this program's patients have undergone operations for cataracts, others have been treated for pterygion (flesh growth in the eyes), strabismus, ptosis (drooping eyelids), glaucoma, pigmentary retinitis, retinopathy, diabetes, etc., when patients’ possibility of carrying out basic daily activities by attaining "useful vision" has been scientifically demonstrated.

According to the statistics of Pando Ferrer, the center responsible for Operation Milagro, the prognosis for cataract surgeries has been very positive with a low incidence of complications, even for high-risk patients.

The island currently has around 600 ophthalmologists and more than 1,200 resident interns, whose studies last three years and include surgical procedures in modern, high-tech installations.

The Cuban specialists employ the most advanced ocular microsurgical techniques using equipment such as the HRT-II (optic and retina nerve topography), the most modern in the world, which is used for early glaucoma diagnosis; the OCT-3 (optical coherence topography) for the early detection of macular infections; the Phacoemulsification, to carry out surgeries through micro-incisions using Ultrasound; the Confoscal Microscope, to detect various cornea affections; and the Excimer Laser, for refractive surgery: myopia, hypermetropia and astigmatism, among others.

Havana, May 26 (ACN) Bolivia’s President Evo Morales inaugurated the 5th Ophthalmologic Center in his country and thanked Cuba for its support.

During the inauguration of the eye-treatment center, linked to the Cuba-led Miracle Operation free eye-surgery program, the Bolivian President extended his respect and admiration to the Cuban people and their leader Fidel Castro.

Referring to the Miracle Operation program, Morales admitted that during conversations in Havana in December 2005, he first thought it difficult to implement such a large project, but that after having seen that thousands of poor Latin American and Caribbean people have been returned their vision, he has considered it a true miracle.

The Bolivian president explained that Cuban doctors have assisted more than 10, 000 Bolivian patients in his country plus another 2, 000 who received the eye treatment in Cuba.

Morales announced that a 6th ophthalmologic center will be opened in Bolivia next Sunday, in the locality of Uncia. Later in the year, he explained, Cuba will technologically outfitting 20 Bolivian hospitals located in the country’s nine provinces.

The Bolivian Head of State thanked Venezuela’s President Hugo Chavez for a recent donation of more than 1 million dollars to set up the infrastructure of Bolivia’s Constituent Assembly building, and he described the action as a gesture of solidarity.

Speaking at the inauguration of the hospital, Cuba’s ambassador, Rafael Dausa, said the growing and successful cooperation between Cuba and Bolivia reflects the friendship and solidarity bonds between both nations, which have been enhanced by the Evo Morales’ government in response to the interests of the South American nation.

Last week, Cuba, Bolivia and Venezuela held a trade fair in Pa Paz in which agreements mutually develop their respecive economies were signed worth 12.1 billion dollars.