USA and Cuba: one year later

Former President of Cuba’s National Assembly, Ricardo Alarcón de Quesada, contrasts claims for compensation against Cuba for its post-1960 nationalisation policies with those against the US for 50 years of genocidal blockade policies 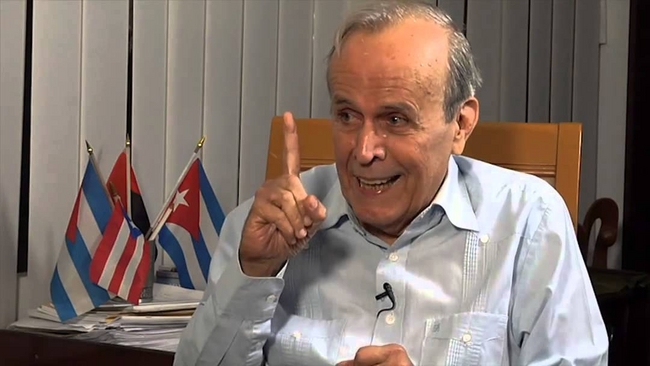 December 17 2015 marked the first anniversary of the announcement that Cuba and the United States would re-establish diplomatic relations. Presidents Raúl Castro and Barak Obama did it at the same time from Havana and Washington, respectively. They both admitted that it was barely the first step of a process toward the elimination of a US hostile policy maintained for over half a century but failed in the end, as the White House resident himself acknowledged.

Since then, Embassies were reopened, some senior officials, including President Obama, have visited Havana, several minor or relatively important problems have been solved, and representatives of both governments have held meetings to discuss a thick agenda of essential topics, including the economic blockade —still in place— the permanent occupation of Cuban territory in Guantánamo and the subversive projects that remain in operation to undermine the Revolution. As long as Washington makes no radical changes in its policy —lifting the blockade completely, returning Guantánamo to Cuba and ending its interference in our affairs— calling such diplomatic relations “normal” would be a bad joke.

There is a question, however, that seems to be a favourite on the American side and to which several of that country’s most read publications have devoted their attention: the claims filed there for alleged losses suffered by corporations and individuals as a result of Cuba’s nationalisation laws of 1960.

This issue would have to be discussed together with Cuba’s own claims for the damages caused by fifty years of economic war and aggression which are incomparably greater and have had a serious impact on the island’s population. An official US document that used to be secret, but no longer is, recognises that the purpose of the policy was to make the Cuban people “suffer” by “hunger and despair”. Approved in the spring of 1960, the text was written before the Cuban nationalisations, and its words are literally consistent with what the Geneva Convention calls the “crime of genocide”.

The revolutionary laws always included the right to fair compensation by the former owners. All those foreign companies that respected Cuba’s sovereignty and accepted our legislation benefited, without exception, from such laws, and have kept normal links with us through business and new investments. It was also the case, by the way, with individuals living in Cuba who adopted the same attitude.

The North American companies were the only ones excluded, owing to their government’s rejection of the Cuban legislation and their economic attacks.

Still, there is an aspect of this issue that the US media are carefully ignoring. It’s been a long time now since those who were expropriated in Cuba received special and privileged treatment that allowed them to get compensation for what they supposedly lost to the revolutionary measures.

Starting in 1964, and ever since, regulations were amended and unique laws were adopted exclusively for that group of people that made it possible for them to obtain compensation for their losses by means of substantial tax deductions. No other American taxpayers were granted similar benefits.

As far as taxes were concerned, it was an exceptional treatment only comparable to what migrants receive under the Cuban Adjustment Act, which also came in handy to individuals who in 1960 had not yet become American citizens but also enjoyed those advantages and helped create the myth of a successful Cuban-American business sector.

It was the Cuban people who got no compensation whatsoever. The blockade has been not only the main obstacle to the island’s development, but also the main cause of that people’s suffering. It’s a genocidal policy, the longest genocide in history. The United States has an obligation to lift it now, immediately and unconditionally, and they must try to compensate their victims if they wish to have relations with their neighbours worthy of being considered “normal”.

This article originally appeared at www.cubadebate.cu on 19 December 2015. Thanks to Walterlippmann.com for translation.