Leading the way in pre-school learning 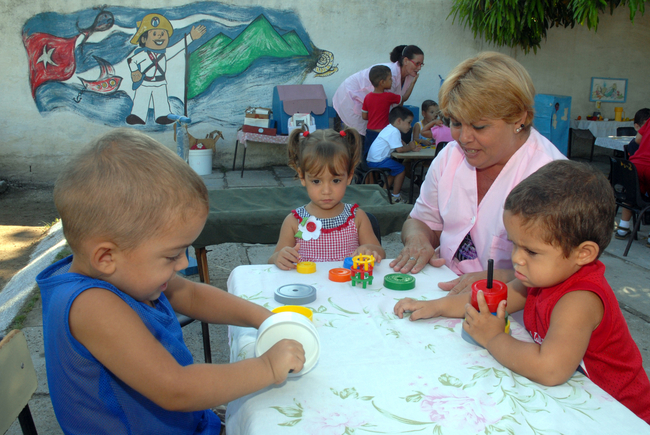 The National Union of Teachers’ delegation to Cuba in October 2016 was impressed by the Cuban education system, as their report in this issue of CubaSí illustrates. The island has the highest levels of educational investment as a percentage of its GDP (13 per cent) than any other nation in the world.

This commitment does not just start when a student enters the classroom. Cuba’s successes in educational outcomes are also in part due to support for Early Childhood Development (ECD) programmes. In 2016, freelance journalist, Katy Stewart carried out research on the subject for a podcast on the Guardian’s Global Development website.

Stewart’s report showed that ECD has been a priority in Cuba since the Revolution. The first 1,000 days of life are crucial for brain development in early childhood since the brain is “characterised by its plasticity”. United Nations specialists agree that this time should be capitalised on as the child has greatest potential to learn and its brain benefits from good nutrition and a stable living environment.

Katy Stewart interviewed policy makers, doctors, parents and pre-school teachers for the podcast and found that “according to the Ministry of Education, today of 855,000 or more children under six in Cuba, 99.5% of them attend an early childhood education programme or institution.”

These programmes start from and during pregnancy, right through to when a child starts school. Pregnant mothers, including 27 year-old Lena Garcia who was interviewed for the programme, received regular check ups from eleven weeks which monitor the baby’s weight and development in the womb. From 38 weeks the checks are weekly, and increase just before the due date. Those mothers with health risks receive more support, including being cared for in maternity homes when needed.

Infant and Child programmes take place at the country’s numerous policlinics where regular check ups are given to children up to one year old, including weighing and measuring, with a comprehensive vaccine programme and information on nutrition. Clinics also look for early signs of overweight children to prevent childhood obesity and diabetes which is on the increase in the country.

It is this focus on prevention at all levels of society not just in health and policlinics and the integration between them, which is one of the strengths of the system according to Stewart: “The work of all institutions is coordinated and linked at all levels of the country’s political administrative organisation.”

The involvement of families and the local community are crucial to ECD too. Cuba runs a highly-praised  ‘Educate Your Child’ programme which is designed for pregnant women and children 0-6 not attending day care centres or other formal pre-school institutions. The programme gives support and participation to families.

Omara Quintero Goicoechea is the national programme strategist and responsible for the ‘Educate Your Child’ programme at the Ministry of Education. In her interview with Stewart she explained the history of the programme and its aims: “The Educate Your Child programme is the result of a research project that lasted 10 years. Back in 1992 the results showed that children weren’t making it in the first grade with a good level of learning, so a group of researchers trained the family to stimulate the development of their children so that by the time they entered school they could be ready. The results were very positive and the programme was slowly implemented in other areas. After 10 years it was decided that the programme would slowly be introduced at a national level. As we enter our 25th year now, the Educate Your Child programme has been proven to have a very positive result among Cuban families.”

The programme supports families to become key players in the child’s development by providing space in community settings for parents, families and children to interact. Training is also given to improve parenting skills and support educational activities at home before children start school, including limiting time on computers and in front of TV.

Margarita Hernández Rodríguez who runs one such programme for ten families in John Lennon Park in Vedado spoke to Stewart about the community setting: “It’s a park with very big lush trees that bring shade. There’s the part with the lawn where we teach them how to look after the environment, not to litter, not to walk on the grass, and they do the activities on the part where there’s concrete, which is a large area. This park measures an entire block and here in the middle there’s a part that they use to play and to carry out activities for stimulation and development.”

As well as the ‘Educate your Child’ programmes, Cuba also provides nursery places at 1,078 day care centres (Círculos) for children of working parents throughout the country.

Cuba has one of the most progressive maternity and paternity provisions in the region. Mothers are granted six weeks paid leave prior to birth and then one year paid leave after birth, six months of which can be taken by either the mother or the father.  Sadly, underlying machismo in Cuban society means that it is still mainly women who take it up.

UNICEF has worked closely with the Cuban government on the ‘Educate your Child’ programme since its inception in the early 1990s and today continues to provide resources to support them. Anna Lucia D’Emilio, UNICEF’s country representative for Cuba spoke to Stewart about the reasons for the success of the Cuban model:

“I think that the first one is the political will, the second one is that they are aware of the importance of the child and therefore they really make a lot of effort, and we have a second point that is the kind of approach that they have; that is an integrated approach. On the other hand, another important issue is the articulation between the different levels, the national one and the local one, there is a kind of articulation and this then allows that you can really see the change at the level of the children and of the families.”

Katy Stewart was clearly impressed by the ECD programmes in Cuba. “The results speak for themselves,” she says. “According to UNESCO, keeping children involved in the third and sixth grades at primary school they [Cubans]perform above the results of other children in the Latin American region in the areas of mathematics, language and natural science. And despite its scant resources, Cuba has eradicated illiteracy, reduced infant mortality at birth to about four per thousand, and created a sense of solidarity and pride among Cuban families.”

Based on the Cuban example UNICEF  is adapting the ‘Educate Your Child’ programme for other Latin American countries. In October 2016, UNICEF coordinator to Cuba, Begoña Arellano, told Cuban reporters that they considered the method “a model to be followed by countries in the area, since it contributes not only to the wellbeing of children but also of society as a whole.” The UN executive acknowledged that Cuba stands out internationally for the efforts it makes from primary education, and characterized this good practice as “a valuable experience.”

Although it is difficult to transplant the project from one country to another exactly, Cuba has demonstrated what it is possible to achieve with little resources, but with commitment from both government, communities and families.

Stewart interviewed numerous beneficiaries of Cuban ECD programmes, both parents and grandparents, all of whom were rightly proud of their programme and wanted to ensure it was protected in the future. Marta Copadea, a mother with two young sons echoed the sentiments expressed throughout the report when she said: “What I do believe we should continue with strongly is education. The educational system in our country, and I’m sorry if anyone is offended by this, but for me is the best in the world. And I think that we as parents, educators, should look after this. We can lose other things but we can’t lose this, we can’t lose it.”

You can listen to Katy’s full podcast and read a transcript of all the interviews at www.theguardian.com/global-development/audio/2016/nov/16/cuba-early-childhood-development-havana-podcast