Democracy in Cuba: Spotlight on the 2018 elections 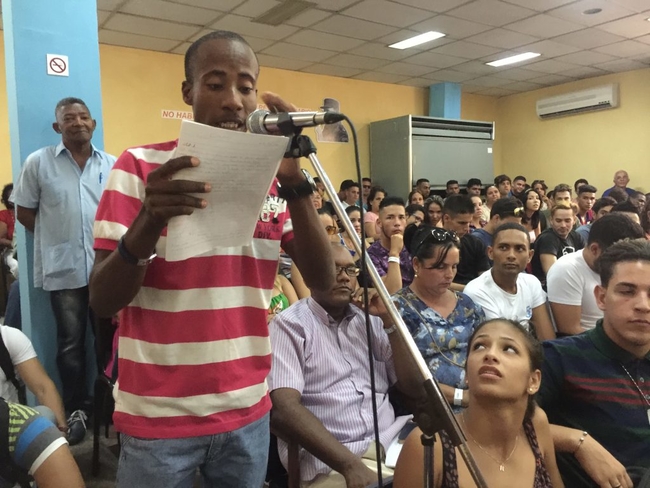 The North American and European mass media pay scant attention to Cuba’s general elections, which usually only warrant a few sentences seemingly written for the sole purpose of pointing out that they hardly qualify as elections at all. But with President Raúl Castro’s announcement in 2013, that he will not accept nomination to the presidency in 2018, we can expect the spotlight to be shone on these elections as never before. CubaSí is publishing two articles which explain the Cuban election process and the participatory nature of Cuba’s governmental system.

In this article, the nomination, election and the role of local municipal delegates will be discussed. This will show how the participatory system works.

In early 2018, all Cuban citizens over 16 years of age will elect their representatives to the National Assembly (Cuba’s parliament), and to the sixteen Provincial Assemblies.

The election is the culmination of thousands of meetings and activities during the preceding months, involving millions of Cubans. Cuba’s system of government, known as People’s Power (Poder Popular), has three tiers made up of the National Assembly, sixteen Provincial Assemblies, and 169 Municipal Assemblies.

The National and Provincial Assemblies are elected every five years, and because they are made up of up to 50% of local delegates from the Municipal Assemblies, local elections are an essential part of the general election process. This is very different from the system in the UK, where local council elections have no bearing on parliamentary elections. Another distinctive feature of the Cuban system of government is that elections are only part of the picture. The involvement of all citizens, not only in the process of elections, but in all aspects of government between elections, is an essential part of Cuba’s participatory system.

The election of 12,515 municipal delegates to the 169 Municipal Assemblies will take place on 26 November 2017, although the process of communities choosing the candidates who will appear on the ballot papers has already begun.

Each of the 169 Municipal Assemblies are made up delegates who have been nominated and elected by the community they represent, with each delegate representing an average of 1,000 voters. The number of delegates that make up the Municipal Assembly varies depending on the size of the population. For example, the Municipality of Mantua, in the province of Pinar Del Río, has a population of 26,000, while the Municipality of Santa Clara in Villa Clara Province has a population of 215,000. The exact size of the Assemblies differ slightly from election to election, depending on changes to the size of the population, but Mantua will have around 30 delegates while Santa Clara will have around 167.

How are municipal delegates nominated and elected?

In the run up to the municipal elections, each electoral district (in the UK we refer to these as ‘wards’) is divided into between two and eight smaller areas for the purpose of holding nomination meetings to choose candidates. This means that most people at the meetings are neighbours and know each other. There will have been 45,688 meetings held throughout the island by 30 October. At the time of writing (9 October 2017) 35,941 persons have already been nominated in 25,844 meetings, which have been attended by 79% of the electorate. Of those nominated so far 17,000 (35.59%) are women, and 65.1% are not currently serving as delegates.

Anyone attending their nomination meeting can put forward the name of a person who they believe would make a good delegate, but the person must be resident in the ward, and must agree to being nominated. People cannot nominate themselves: it must be the community who put forward who they think is best suited to the role. The person putting forward the name must say why they think the person would make a good delegate. In practice, several names are put forward, and then the meeting discusses the merits (and de-merits) of the proposed candidates.

After discussion, everyone at the meeting votes to choose who, from amongst the people proposed, they want as their candidate. Each of the meetings in the ward selects a candidate in the same way, and consequently, there will be between two and eight candidates on the ballot paper on the day of the election.

To be elected to represent the ward at the Municipal Assembly, the winning candidate must receive at least 50% of the vote on Sunday 26 November, when there will be 24,000 polling stations across the country open from six in the morning until six in the evening. If no candidate achieves more than 50% of the vote, then a run-off election between the two candidates with the highest number of votes will be held on the following Sunday (3 December). Any member of the public can attend the counting of the votes which happens immediately after the polls close.

Another significant difference between Cuban and UK elections is the absence of election campaigning, which, in the UK and elsewhere, is chiefly based on the competition for electors’ votes between political parties on the basis of election promises and policy manifestos. Cuba’s political system is one based on public participation, and policy formation is done on the basis of deliberation and discussion. The notion of elections being the site of policy debate is an anathema to Cuban political culture, which seeks inclusion and unity.

What is the role of the municipal delegate?

The municipal delegate is a member of the community that elected him or her, living and working in the neighbourhood that they represent. Most delegates remain in their usual employment and carry out their role on a voluntary basis. Those delegates who take up full-time roles (the president and vice-president of the Municipal Assembly for example) are paid at the same rate as their usual day-job, which is held open for them for when they cease being full-time delegates. This means that elected delegates do not become separated from their electors and continue to share the ups and downs of daily life with them.

The duties of an elected delegate are regulated by law. Every delegate must hold a surgery at the same time and place every week so that individual residents can meet privately with their delegate to ask for help and support in resolving any problems they may have in relation to the local administration, or any of the public services and industries for which the Municipal Assembly has responsibility. In addition to weekly surgeries, delegates must hold regular public meetings with his or her electors to report on the work of the Municipal Assembly, explaining local policies and decisions. At these meetings (known as ‘accountability meetings’) voters are expected to report problems that they encounter with public services, and delegates are duty-bound to follow up every single report, suggestion or complaint.

Since the 1990s, aside from the formal accountability meetings, more frequent, more local, and therefore smaller and less formal meetings are held to encourage greater participation on behalf of the citizens, and to foster a closer relationship between the delegate and his or her electors. These meetings, however, are not just ‘talking shops’. Every suggestion, report or complaint, is carefully recorded, and collated at the municipal, provincial and national level. This body of information is then used to make evidence-based decisions about resource and budget allocation, and informs policy-making.

Without the active participation of the public in these meetings, the quality of decisions at all levels of People’s Power would be compromised, and the policy-making would be less effective. This is one important way in which the public participate in governmental affairs.

To bring government closer to citizens and to provide further opportunities for participation, in 1988, an additional level of government was added to People’s Power: the Popular Councils (Consejos Populares).

Immediately following the municipal elections, the Municipal Assemblies establish Popular Councils throughout their municipality. For example, in the Municipality of Mantua, there are nine Popular Councils, each one of which groups together several wards.  Each Popular Council is made up of the delegates of the wards concerned together with representatives from the local mass organisations, that is Committees for the Defence of the Revolution (CDR), Central Union of Cuban Workers (CTC), Federation of Cuban Women (FMC), and the Association of Small Farmers (ANAP).

The Popular Council can also invite others to join the Council where the delegates think it helpful for resolving problems, or improving services, for example health workers, managers of local factories or farms, teachers from local schools, social workers etc.

Since the Popular Councils became incorporated into the Peoples’ Power system in 1992, responsibility for the day-to-day oversight of many services and production centres has been devolved to them from the Municipal Assembly. This has meant that the Municipal delegates have been able to work as a team for the communities they serve, and also, importantly, the Councils provide citizens, through their mass organisations, with the opportunity to support, the work of the elected delegates. This style of working means that communities are able to prioritise the work of the Popular Councils, identify local resources, collectively develop plans for their communities, and request support  from the  Municipal Assembly.  For example, plans might include identifying the need for an additional medical centre, facilities for young people, or extra places at day-care centres for senior citizens.

Approximately, one in every 1,000 people is serving as a municipal delegate at any one time, and, with an average of 50% new delegates returned at each local election (held every two and a half years), a significant number of citizens have experienced incumbency. Elections are not events where the citizens’ relationship with government starts and ends. Frequent interaction between the electors and their delegates, and membership of the mass organisations create close contact between the Cuban people and their government in the neighbourhoods where people work and live.

The Revolution’s approach to democracy is one in which voting is just one part of a system that depends on the involvement of the whole population in the business of government.

Lauren Collins is an expert on Cuba’s elections who has just finished a PhD on the country’s participatory democracy at the University of Nottingham. In the next issue of CubaSi she will look at the nomination and election of representatives to the sixteen Provincial Assemblies and the National Assembly.