Democracy in Cuba 2: Spotlight on the 2018 elections

In this second report on Cuban elections and the participatory governmental system LAUREN COLLINS looks at how Cuba’s parliament works, and explains Cubans elect their National Assembly of people’s Power and their President. 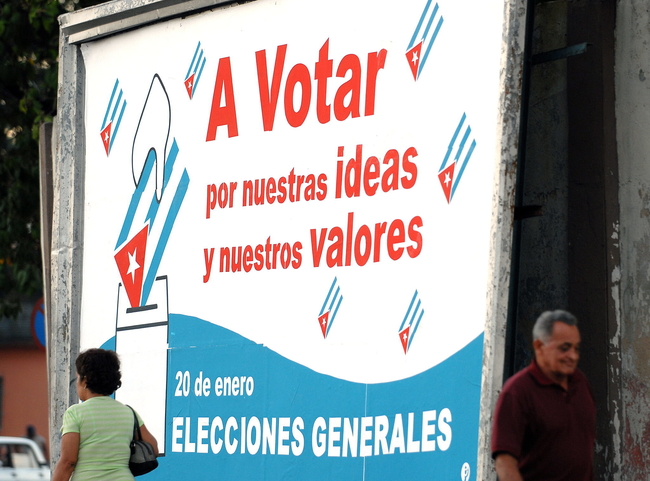 On 19 April 2018, Cuba’s newly-elected National Assembly (Cuba’s parliament) will convene. One of its first responsibilities will be to elect the next President of the Republic of Cuba.  Elections to the National Assembly, and to the 16 Provincial Assemblies, are always preceded by local municipal elections.

In the Autumn issue of CubaSí, we looked at the nomination, election, and the role municipal delegates. We saw in the previous article that local communities nominate and elect their own candidates and that the law requires that there must be at least two candidates on the ballot paper for each seat on the Municipal Assembly. However, in the case of elections to the 16 Provincial Assemblies, and the National Assembly, there are not multiple candidates for each seat on these bodies. This article focuses on the National Assembly, although the procedures for electing Provincial Assemblies are very similar.

On 26 November 2017, 12,515 ordinary citizens were elected to serve on the country’s 168 municipal assemblies. By law, the National Assembly must made up of up to 50% of elected municipal delegates. This is one of the ways which ensures that Cuba’s national parliament does not become a ‘Havana Bubble’. Having municipal delegates serve in the national parliament creates strong links between the highest governmental body and the communities it serves.  Of the current 612 deputies (as those elected to the National Assembly are known), 284 are elected municipal delegates which is 46.41 % of the total. Women make up 48.86 % of the Assembly, and 37.09% are black or mixed-race. The average age of deputies is 48 years, and 45% are members of the Communist Party of Cuba.

The National Assembly is the only body in Cuba which can enact legislation. To carry out its duties effectively, it has the following structures: Council of State, Council of Ministers, and Work Commissions.

The Council of Ministers is effectively ‘the Government’. It also comprises the First Vice President, the Vice Presidents, and the Ministers which head up the various government departments; 32 members in all. The Council of Ministers organises and directs the execution of the political, economic, cultural, scientific, social and defence activities agreed upon by the National Assembly of Popular Power. Also amongst its responsibilities are: directing the foreign policy of the Republic and relations with other governments, proposing the projects of general plans of economic-social development, and preparing the draft budget of the State and once approved by the National Assembly of People's Power, ensuring its implementation.  It is worth noting here that (in 2017) 72% of the current expenditure of the State is allocated to basic social services (quality of life of the population and social security benefits).  This is an indication of the importance of the work of the National Assembly to the everyday welfare of the entire population.

Commissions comprise an average of 33 delegates. Although the National Assembly do not meet as often as parliaments in the Europe, the hard work goes on in these work commissions. They hold extensive public consultation as part of their deliberations, and policy and legislative proposals are worked through in detail prior to being presented at National Assembly sessions.  This explains why many votes are unanimous. The debates and discussions mostly take place outside the legislative chamber, in the commissions and in the country.

How are the National Assembly deputies elected?

Candidacy Commissions play an important role in selecting candidates to the Provincial and National Assemblies. Each of the 168 municipalities creates a Candidacy Commission, as do each of the 16 Provinces. There is also a National Candidacy Commission. Each commission is made up of representatives from the following six organisations: Committees for the Defence of the Revolution, Central Union of Cuban Workers, Federation of Cuban Women, and the Association of Small Farmers, the Federation of University Students, and the Mid-Level Students' Federation and each is chaired by a Trade Union member. These six organisations decide themselves who will represent them on the Candidacy Commissions. It is noteworthy that young people are involved in this process through the two student unions.

The role of the Candidacy Commissions is to receive proposals from the public, via their mass organisations, as to who should be on the ballot paper when the elections to the National Assembly take place. Proposals are made in full open meetings (plenary sessions) of each of the mass organisations in all municipalities and provinces, and then forwarded to the relevant Candidacy Commission. Hence there will be 6 x 168 meetings at the municipal level, 6 x 16 at the provincial level,  that is 1,104 meetings in all. It is the job of the Candidacy Commissions to review every proposal. At the time of writing (5 January 2018), the mass organisations had held 970 of these meetings, at which12,640 people have been proposed as suitable to be National deputies. In addition, the Popular Councils (for details of Popular Councils see the article in the Autumn issue of CubaSí also make proposals to the relevant Municipal Candidacy Commission.

The Candidacy Commissions review all the proposals presented to them. Their first task is to see who has been proposed multiple times. For example, in the past, Fidel Castro would be proposed by many organisations across the island. Following de-de-duplication, people who have been proposed are interviewed to ensure that they are willing to stand in the election, and that they have the time to carry out the role. This will often depend on the type of work they do, and if their workplace can grant them sufficient time off work to carry out the role. It is important to note that most deputies continue with their normal employment, and carry out the duties as legislators in addition to their day jobs, receiving no payment for their work as National deputies.

Given the importance of the National Assembly, and the fact that there will be only one name on the ballot paper for each seat in the Assembly, it is important to ensure that people proposed are likely to be supported by the electors and that they have the relevant skills for the role. In order to establish this, the Candidacy Commissions carry out extensive consultation within neighbourhoods, workplaces, colleges and schools. Another role that falls to the Candidacy Commissions is that of ‘matching’ potential candidates to ‘constituencies’. This is necessary because of the way in which proposals are put forward. The meeting of the mass organisations which put forward suggestions for candidates are not limited to proposing people who live in their area. They are free to put forward anyone they think suitable. Consequently, there is a job to be done ‘matching’ potential candidates to ‘constituencies’.

When reviewing proposed candidates, the Candidacy Commissions must ensure that up to 50% of candidates are delegates which were elected to the municipal assemblies in November 2017.  It is also the Commissions’ responsibility to ensure that the National Assembly reflects all sectors of Cuban society, including, workers from the state and non-state sectors, members of the mass organisations, farmers, nationally-known figures from the arts and sports, members of the armed forces, women, people of colour, all age-ranges, and from all parts of the island.

When this process is completed, the Candidacy Commissions provide the municipal assemblies the names of the people which, after their extensive consultation process, the Commission considers, would be best suited to the role of National Deputy on the basis of their skills and capacity, and, importantly, acceptability to the electorate. Municipal assemblies then formally nominate the candidates. Even at this late stage, municipal delegates can decline to nominate any candidate that the Candidacy Commissions have recommended, and the Commission must then present an alternative.

After the formal nomination of candidates by the municipal delegates has been completed, elections can take place. Everyone over the age of sixteen has the right to vote, but voting is not compulsory.

Electing the President of the Republic

Unlike the USA, Cuba does not elect its president directly. And unlike the UK, the head of state is not the preserve of a hereditary system. It is the National Assembly which elects the Head of State.

The Assembly deputies then elect the Council of State, which consists of a President and first vice-president, other vice-presidents, a secretary and 23 other members, totalling 31 members. This election is facilitated by the National Candidacy Commission, who meet with every deputy directly after they have been elected, and before the first session of the National Assembly.

Deputies have the right to propose any deputy to any of roles on the Council of State and also the president, vice-president and secretary of the Assembly.  They write down, in secret, the post (President of the National Assembly, Ordinary member of the Council of State, President of the Republic etc) and the name of the deputy that they would like to see in that role.  This is then deposited in a box anonymously, as in a secret ballot. The difference is, that it is up to the deputy who they propose for which post, the only restriction being that they must be an elected member of the National Assembly.

In summary, Cuba’s general elections, held every five years, is a two-part process. It begins with communities nominating and electing their municipal delegates. There then follows the process of gathering thousands of proposals for the National Assembly deputies, with each of the 176 Candidacy Commission, each headed by trade union member, discussing, debating and consulting with tens of thousands of citizens, to find the most suitable candidates. This process takes three months or more. When this stage is complete, elections take place again, this time to elect the provincial assemblies and the National Assembly. The National Assembly then elects the President of the Republic.

Raúl Castro has publicly stated that he will not be accepting nomination for the position of President. The world’s press is rife with speculation about who will succeed him, and how this might change Cuba’s future policy. The same speculative noises were heard when Fidel announced, in February 2008, that he would not be accepting nomination to the Presidency due to illness, and again when he died in November 2016.  This speculation reflects a view of the President as all-powerful, and does not take account of the collective decision-making of the Council of State, and ignores the role of the National Assembly. It also gives no credence to the involvement of millions of Cuban citizens in the extensive process of popular participation which takes place after the nomination and election of municipal delegates, and before the elections to the National Assembly. The strength of Cuba’s system lies in its participatory character, which ensures that its citizens regard their National Assembly, are truly representative of their society.

A recent comment on the Granma website from a member of the Cuban public sums up how most Cubans view their electoral system:

“The elections in Cuba are expression of participation of the people in the election and in the decision making. In Cuba democracy is real, it is to choose and more; it is to participate, decide, distribute and access fairly the assets our country has created.”

Lauren Collins is an expert on Cuba’s elections who has just finished a PhD on the country’s participatory democracy at the University of Nottingham.