Countering the ‘fake news’ on Cuba 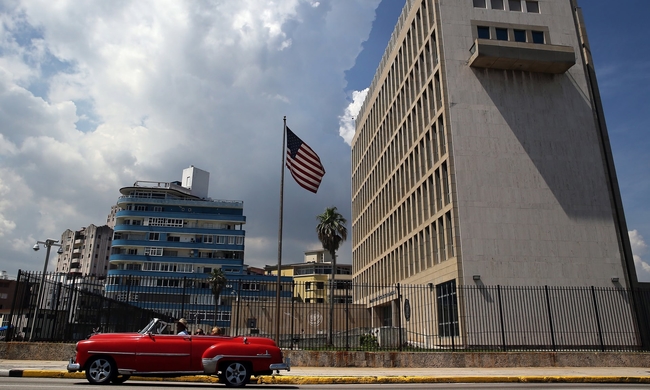 The US embassy in Havana

Countering the ‘fake news’ on Cuba

President Trump’s frequent use of the phrase ‘Fake News’, is designed to undermine criticism of his own policies at home and abroad. For the Cuban people the term presents real and painful irony as Washington continues to propagate an endless stream of fake stories to justify its aggressive policies against the island.

Most recently, the White House has accused Cuba of perpetrating ‘sonic attacks’ against its diplomatic staff in Havana. However, despite extensive investigations no evidence has been provided. Indeed, scientists have questioned if the technology that would have been needed for such attacks even exists. Such lack of any proof didn’t stop the White House expelling Cuban diplomats from Washington and operating its Havana embassy with a minimal number creating severe difficulties for legal travel, tourism and migration between the two countries.

Together with this, the US State Department has issued its citizens with safety warnings against travel to Cuba, despite the fact that the island is one of the safest travel destinations in Latin America. The effect has been to reduce the numbers of US travellers. And of course, such a false narrative props up the continuation of the US blockade.

The Cuba Solidarity Campaign works hard to counteract such propaganda which is manufactured in the minds pro-blockade, hard line Cubans based in Miami and propagated by the US government. These groups have stopped at nothing in their efforts to demonise and attack Cuba.

It is why exchanges between Britain and Cuba are so important so that people can see and hear first hand about the successes and challenges faced by the Cuban Revolution and the Cuban people.

You can read the about the experiences of British educationalists who took part in a recent delegations to Cuba and reported back to the NEU (NUT Section) conference on page 20. CSC organises a range of tours and delegations every year and many CSC members and trade union representatives will also be in Cuba for May Day this year.

In May we host a visit from Cuba specialist Arnold August who will speak to local CSC groups across the country. While in June, Miami Five hero Fernando González will speak at our AGM and meetings in London and Liverpool. Such tours mean that people can find out directly for themselves about the reality of the island and the effects of the cruel US blockade.

These activities are essential as part of our work to cut through the ongoing ‘Fake News’ emanating from Washington and Miami. Together we can make a real difference in helping to secure the right of the people of Cuba to tell their own story free from the anti Cuban lens imposed upon them by successive US governments.