Cuba’s success in child health: what can one learn?

Professor Imti Choonara from the University of Nottingham has had a long standing collaboration with Cuban health professionals. Together with Dr Mauro Castello, a paediatric surgeon from Camagüey, he highlights Cuba’s excellent child health in this article originally published by BMJ Paediatrics Open 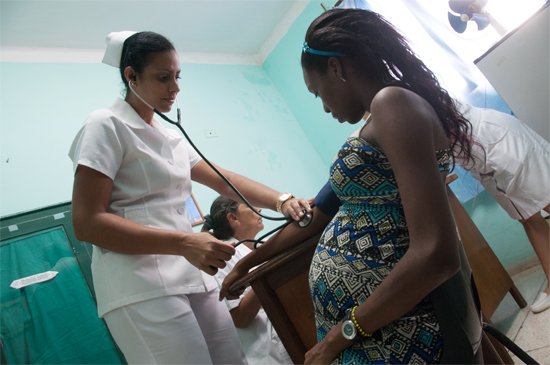 During her pregnancy, a woman is seen at least 12 times

Cuba has excellent child health as illustrated by its low child mortality rates. Child mortality rates (under 5 years, infant and neonatal) in Cuba have all been lower than in the USA for many years. World Health Organisation (WHO) figures for 2016 for under-5 child mortality (U5M) show that Cuba has a U5M rate of 5.5 per 1000 live births, whereas the USA has a U5M rate of 6.5 and Costa Rica has a rate of 9.7. Cuba has the second-lowest U5M in the Americas behind Canada with a rate of 4.9. U5M is considered to be an excellent indicator of child health by UNICEF. Cuba is a middle-income country with considerable economic problems exacerbated by the blockade imposed by the USA. How then has it achieved such good child health outcomes?

Cuba’s achievements in child health are due to a combination of factors. Cuba has an integrated healthcare system with all sections cooperating fully. The basis for good health is universal healthcare and universal education. Literacy is at 99.7% and this enables public health campaigns to reach the entire population. Free universal education has resulted in Cuba having one of the highest doctor-to-population ratios. Programmes such as ‘Educa a tu hijo’ (Educate your child) help to prepare young children for school. This non-institutional-based programme was developed in rural areas, and subsequently extended throughout the country, as it was recognised that early child development is essential for child well-being.

Primary healthcare is a key feature of healthcare in Cuba. Almost half of all Cuban doctors work in primary healthcare, and it exists both in urban and remote rural areas. The presence of health facilities even in remote rural areas is essential to ensure universal access to health. Each team usually consists of a doctor and nurse working together in a consultorio (primary healthcare facility) and is usually responsible for approximately 300 families. The team knows each family both medically and socially, which is important due to the effect of social determinants on child health. There is a strong emphasis on the prevention of disease. Health promotion is a key feature of Cuban society and involves children’s TV programmes as well as schools and the mass media. Healthy eating, the importance of hand-washing and exercise, and sexual health have all featured in a variety of different campaigns.

There is a recognition that good antenatal care has a major impact on child health. During the pregnancy, each woman is seen at least 12 times, while women with medical or social problems are seen more frequently. Screening for foetal congenital malformations is offered. One of the unique features of antenatal care in Cuba is the provision of maternity homes, where women with medical or social problems are offered free residential accommodation for several weeks including free meals to ensure adequate nutrition for both the women and the foetus. Education is provided about the importance of diet and the minimisation of risk factors such as alcohol and tobacco. This multidisciplinary approach has seen Cuba achieve a significant reduction in the number of low birth weight (LBW) babies. LBW babies (

Each child is seen regularly during infancy (fortnightly for the first six months and monthly between six and twelve months) and early childhood by the primary healthcare team. More frequent visits are arranged for infants with chronic illnesses. These checkups occur in the patient’s home as well as the surgery (the consultorio), which helps to ensure that health professionals have a true picture of family life. A comprehensive immunisation programme provides infants with eleven immunisations by the time they reach two years of age.

Cuba was the first Latin American country to eradicate poliomyelitis, and as of 2016 had eradicated five other infectious diseases (neonatal tetanus, diphtheria, measles, whooping cough and rubella). In 2015, the WHO validated the elimination of mother-to-child transmission of HIV and syphilis in Cuba. Polyclinics provide a link between primary healthcare and hospitals. Paediatric specialists offer clinics in the polyclinic, which means that children can be assessed in the community without needing to attend the hospital. Polyclinics also offer clinical psychology support to children with mental health problems, ensuring a waiting time of only one to two weeks.

Breastfeeding rates are high (approximately one-third of infants exclusively breastfed for the first six months) and breastfeeding is encouraged by the primary healthcare team. The nutritional state of children in Cuba is good, although obesity is increasing. A positive attitude towards disability is encouraged. The presence of an educated population reduces misconceptions and stigma associated with diseases and conditions such as epilepsy.

Empowerment of women in civil society has been a major achievement in Cuba. First, all girls attend school. Women have the same rights as men in Cuban law and receive equal pay. Maternity leave is twelve months and the woman’s job is protected by law. The majority of professionals and Members of Parliament are women, with Cuba having the second-highest proportion of women in parliament worldwide. This representation in parliament is a reflection of the importance of gender equality in Cuba, and this empowerment is likely to be a contributory factor to child health. Unlike in many other Latin American countries, women are in full control of their sexual and reproductive health through the widespread availability of family planning clinics alongside specialised services. Different forms of birth control are available and abortion is provided where requested in a safe environment.

Socioeconomic determinants contribute to health and to child health in particular. Inequality is a problem in Cuba, like all other countries. The greatest inequalities involve people working for foreign investment companies, the self-employed, private workers and individuals working in the tourist industry, who may earn significantly more than state incomes. The Cuban government constantly looks at ways of reducing these inequalities, either by raising the salaries of state employees or increasing taxes in the private sector. Additionally, Cuba’s welfare state ensures that nobody is destitute. Malnutrition in children is not considered a major problem in Cuba and severe malnutrition was declared absent by UNICEF over a decade ago. This is despite the problems caused by the economic blockade by the USA. Inequalities between regions are less than compared with other countries. Regional U5M rates for the years 2015–2018 show the highest rate in Guantánamo in the east (7.5) and the lowest in Pinar del Río in the west (4.1).

The Cuban government recognises health as a priority. This is of major importance and is recognised as such by groups such as UNICEF. It is unfortunate that many other governments do not give the same priority to health, and to child health in particular. Investment in people through health, education and social services has unfortunately resulted in less money being available for other services, such as roads, transport and housing, but Cuba has shown that despite limited resources a country can achieve excellent child health if the government and citizens are committed to making it a priority. Cuba is an example of what is possible.