A resounding YES vote for the new Constitution 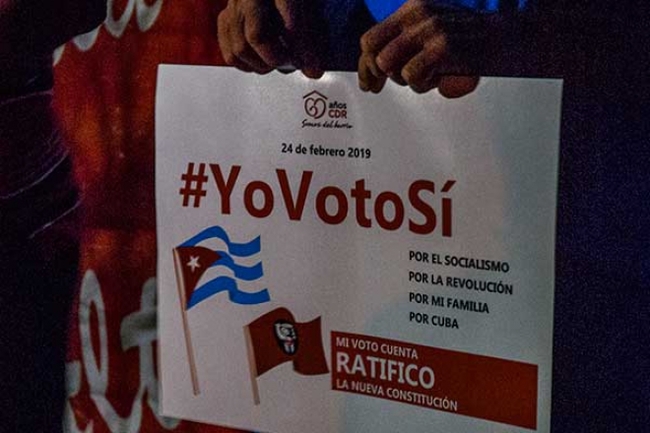 Cubans overwhelmingly ratified a new constitution in February following an intense period of national consultation and debate. The vote on Sunday 24 February 2019 saw 84.4 per cent of the country’s 8.7 million voters participate in the YES/NO referendum.

Of those that voted, 86.85 per cent ratified the document, 9 percent voted against, and 4.5 per cent spoiled or left ballots blank. Cubans living abroad also had the chance to vote, as consular offices in 130 countries set up voting booths too.

The final draft of the new Constitution, which includes 229 articles, was approved by the Cuban National Assembly on 22 December 2018, after three months of public forums where all citizens were invited to contribute to the final document.

Before the vote, almost nine million people took part in a participatory process to discuss the Constitution. Over a three-month period from 13 August to 15 November 2018, more than 780,000 suggestions and 9,600 proposals were discussed in 133,000 citizen meetings in neighbourhoods, workplaces and universities.

As a result of the nationwide consultation, 760 changes were made to the first draft, including modifications to 59.8 per cent of articles, the addition of two new ones, and the removal of three. Only 38.8 per cent of the first draft remained unaltered. The most significant changes to the last constitution (ratified in 1976) included reference to markets and recognition of private property, foreign investment, small businesses, gender identity, the internet, the right to legal representation upon arrest and habeas corpus.

The new constitution will also restructure government, adding a prime minister and setting term limits for the president, among other changes intended to give more power to municipal government.

The issue of same-sex marriage, covered under Article 68 in the original draft, and covered in Article 82 in the final version, attracted the most debate - and negative campaigning. In advance of the February vote, church groups opposing same-sex marriage organised a poster campaign calling for a NO vote because the new Constitution removed the definition of marriage as a union between “a man and a woman,” and instead described it as “one of the forms of organisation of families.”

Despite a prominent public campaign, supported by churches and anti-Cuba groups in the US, the NO vote only managed 9 per cent of the vote. Citizens are free to observe the count in their districts in Cuba, and those opponents of the new Constitution that attended concurred with the official figures on voter turnout and results through reports they posted on social media.

See CubaSí Autumn 2018 and Winter 2019 and www.cuba-solidarity.org.uk for previous articles with more details on the content of the new Constitution and consultation process.