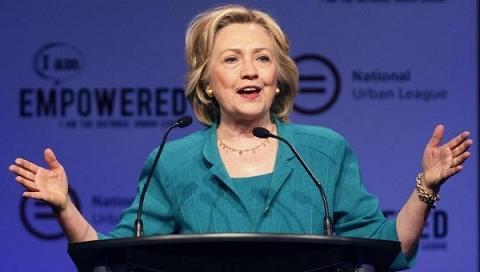 Hillary Clinton has criticised supporters of the Cuban blockade as looking at the world through an “outdated cold war lens.”

U.S. presidential hopeful Hillary Clinton called Friday for a total end to the blockade of Cuba, and demanded Republican opponents “either get on board or get out of the way.”

“The Cuba embargo needs to go once and for all. We should replace it with a smarter approach,” she said, arguing that the decades-old blockade had failed to achieve anything.

The statement came during a speech at the Florida International University in Miami. During the speech, Clinton lambasted supporters of the blockade as looking at the controversial policy “through an outdated cold war lens.”

Clinton warned Republicans supportive of the blockade “would reverse the progress we have made.”

“For them ideology trumps evidence, and so they remain incapable of moving us forward,” she said.

In an apparent concession that the Cuban blockade has damaged U.S. relations in Latin America and the Caribbean, Clinton said, “We have the chance for a fresh start in the Americas.”

However, the Democrat presidential hopeful also acknowledged her own past refusal to oppose the blockade. Her husband, Bill Clinton, was the first U.S. president to sign into law the blockade against Cuba.

Earlier this month Cuba and the United States formally resumed ties after 54 years and the Cuban flag was raised over the Caribbean island's embassy in Washington.

The end of an icy era in relations between Washington and Havana has been applauded by the world but there are complex issues to resolve in order to reach a full normalisation, as the blockade has been in force since 1962 and the territory of Guantanamo has not been returned since 1903 when it was rented without a contract completion date.