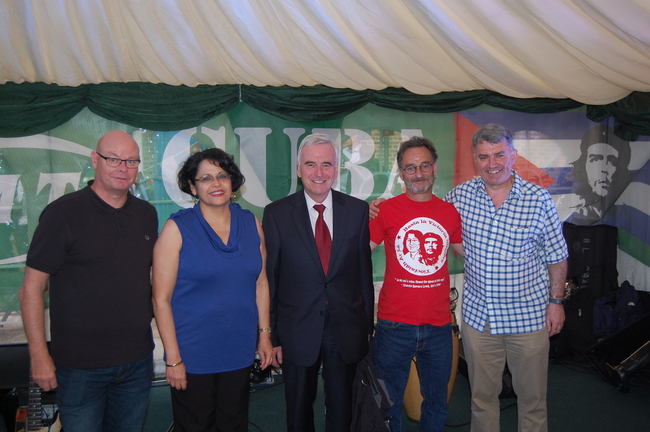 Huge Cuban flags and a ‘Never on our Knees’ RMT blimp flew high over the London sky at Maritime House, the RMT south London HQ for the 13th Annual RMT Cuba Garden Party. Over 600 guests joined the event – a highlight in the trade union and labour movement calendar – for a night of entertainment and solidarity.

Mick Cash, RMT General Secretary addressed the crowds making clear that the struggle against the illegal blockade of Cuba must go on, and demanded that everyone should respect Cuba’s sovereignty; “what happens in Cuba is a matter for the Cuban people and the Cuban people alone to decide”.

At the same time as celebrating the freedom of the Miami Five, Mick Cash called for the British Government to grant visas to the Five; “so that we can then celebrate this victory together”.

John McDonnell MP made clear his longstanding support for Cuba. He took the opportunity to report on the huge and growing support for Jeremy Corbyn MP in the current Labour Party leader elections.

The new Cuban Ambassador, H. E. Teresita Vicente, spoke at her first Garden Party, where she thanked the RMT and the British trade union movement for their outstanding work in solidarity with Cuba over so many years.

She spoke of the crucial campaign in Britain that had taken place for the freedom of the Miami Five and said that the excellent level work of solidarity in Britain was known across Cuba. The Ambassador made clear that the US Blockade is still in place, Guantanamo Bay is still occupied and that the US is still campaigning to undermine an independent Cuba. “Solidarity is more important today than ever. We count on all of you here today to continue the struggle against the blockade which still has to be won”.

There was great Cuban style food and Havana Club rum cocktails. Crowds loved the wonderful Cuban music from Omar Puente and Raices Cubanas and the dance floor was packed all night.

The ‘Blockade Buster’ raffle was a soar away success raising more than £2,000 for the work of Cuba Solidarity Campaign with the lucky winner grabbing a pair of flight tickets to Cuba.

The crowds partied ‘till late and were delighted by a fabulous solidarity set from the great Alabama 3 who ended the night with a crowd pleasing version of Joy Division’s seminal hit ‘Love will tear us Apart’.

There is clearly no way that these crowds wanted to be ‘Apart’ from the RMT Garden Party and as Peter Pinkney made clear:

‘Just as the campaign to end the blockade goes on, so will the RMT Garden Party go on in solidarity with the Cuban revolution’.

Visit the CSC Flickr page for Photos from the Garden Party