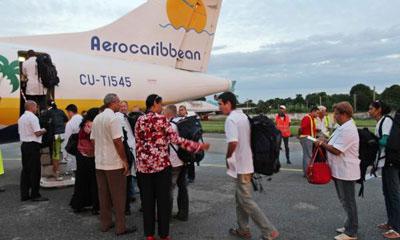 Dr. Norberto Ramos, leading the brigade, noted that they have been equipped with all the necessary medicine and equipment to deal with the effects of the intense rain and flooding on the island

A 16-strong Cuban medical brigade including doctors, nurses and epidemiologists, together with three construction engineers and two electrical engineers, left for the Commonwealth of Dominica this Monday, where they will join the efforts to assist the victims of Tropical Storm Erika.

Shortly after 7.00 a.m., the Aero Caribbean ATR 72 aircraft took off from the Jose Martí International Airport in Havana, carrying 1.2 tons of medicines, supplies and disposable materials for assistive care, together with the personnel.

Dr. Norberto Ramos, leading the brigade, told AIN that the team who will attend to the population in disaster areas following the onslaught of the tropical storm had been put together in just 12 hours.

He noted that among those leaving for Dominica are specialists who traveled to West Africa earlier this year to combat Ebola, as well as the earthquakes in Chile and Nepal.

The brigade has been equipped with all the necessary medicine and equipment to deal with the effects of the intense rain and flooding on the island, the doctor added.

Yosvany Vera, one of the members of the brigade, stated that he will work with the same level of dedication as he did in Sierra Leone up until five months ago, where he participated in the fight against Ebola.

Cuba has always been there when needed and this is no exception, he added, while admitting that every mission is a worry for his family. However, his experience in Africa demonstrated the adequate measures taken to limit the risks of contracting diseases in disaster situations.

For Dr. Gisela Hernandez, an anesthesiologist at the Comandante Manuel Fajardo Hospital in the capital, today is a proud moment and reinforces Cuba’s standing in regards to international solidarity.

While she notes that her family was not expecting her to receive another mission so soon, having returned from Nepal just a few weeks ago, they are sure that she will again return with the satisfaction of having completed her mission to save as many lives as possible.

The medical brigade, composed of nine doctors and seven nurses, including five specialised in obstetric care, will join the 11 Cuban doctors of the Integrated Health Program already working in the Commonwealth of Dominica.

The group forms part of the Henry Reeve International Contingent of Doctors Specialised in Disaster Situations and Serious Epidemics, which since its creation has served in various countries across the world, including during the recent Ebola outbreak in Western Africa.

According to press agencies, rescue workers have been attempting since Sunday to reach several communities that were isolated by floods and landslides in the wake of Erika, which left 20 dead and more than 50 missing.

Speaking to the nation, Prime Minister Roosevelt Skerrit explained that the designation of special disaster areas was made following the loss of life and damage to property caused by Erika, which hit the island August 26-27 with over five hours of heavy rain and winds of 85 kilometers per hour, causing flooding and landslides.