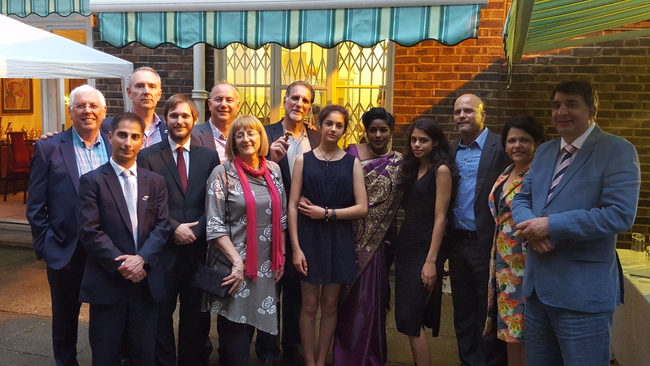 Rene and Gerardo with CSC Exec and Legal Team

At a special reception for the Miami Five's René González and Gerardo Hernández and their families, the Executive Committee of the Cuba Solidarity Campaign invited the two heroes to accept nomination as Honorary Presidents of CSC.

Bestowing the honorary positions on behalf of the Campaign, Chair of CSC Diana Holland said

“There can be no more deserving recipients of this award than the two of you as representatives of all the Five and their families. We are grateful for what you have done and the inspiration that you have given us”

“We are very grateful for all the support for the Five and our families, and also for the Cuban people, that we have seen across Britain during this Freedom Tour. We are therefore honoured and proud to accept this position of joint Honorary Presidents of the Cuba Solidarity Campaign. You are like one big family to us now”.

Rene Gonzalez made clear his appreciation for the work of CSC saying:

“The campaign in Britain was the best organised and with the clearest and most effective strategy in the campaign for freedom and justice. If it wasn't for the CSC and the Trade Unions, we wouldn't be here today".

The Miami Five Freedom Tour has seen the men and their families travel the length and breadth of the country, travelling over 2,000 miles covering events including the Durham Miners’ Gala, Unite Policy Conference in Brighton, the Houses of Parliament, rallies in Glasgow, Manchester, Cardiff and London. After their appearance at Tolpuddle, Rene and Gerardo will have spoken in front of over 150,000 people.

The special reception was held at the residence of the Cuban Ambassador Teresita Vicente and was attended by the family members on the delegation Olga Salanueva, Adriana Perez, Irmita Gonzalez and Gerardo and Adriana’s baby Gema who enjoyed the wonderful summer evening. The reception was attended by members of the CSC Executive Committee plus special guests from the legal field, the Arts and trade union and labour movement.

The reception also thanked the team from Mansfield Chambers for their wonderful work on the two and half year legal campaign to secure visas for Rene Gonzalez to travel to Britain. Barristers Mark McDonald, Shivani Jegerajah and Stephen Knight as well as legal adviser Mohamed Elmaazi were all presented with gifts by the Cuba delegation to thank them for all their efforts.

“We are all incredibly honoured to have you here with us in Britain and your visit has given thousands the opportunity to meet you in person. Of course the struggle for solidarity goes on. By working together, as we did on the Five, we will defeat the blockade, get Guantanamo returned to the people of Cuba and make real the slogan ‘a better world is possible’ a reality.

Guests filmed some of the speeches at the event. Rene and Gerardo speaking the Reception is on the CSC YouTube Channel here, H. E. Teresita Vicente and CSC Director Rob Miller here and Shivani Jegarajah, Barrister from Mansfield Chambers, speaking on the visa case is on the here.