A further step toward peace in Colombia: Government and FARC-EP reach a final agreement in Havana 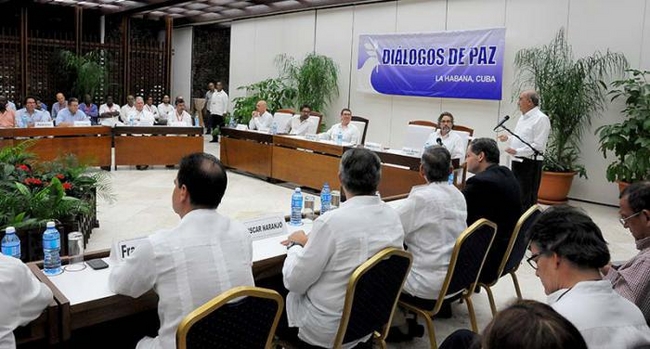 THE delegations of the Government of Colombia and the Revolutionary Armed Forces of Colombia-People's Army (FARC-EP) announced in Havana this Wednesday, August 24, that they had reached a final, full and definitive agreement on all the points contained within the Agenda of the General Agreement for the Termination of the Conflict and the Construction of a Stable and Lasting Peace in Colombia.

The document was read by the Cuban and Norwegian guarantors of the negotiating process in the El Laguito Protocol Hall in Havana, attended by the Minister of Foreign Affairs of Cuba, Bruno Rodríguez Parrilla, in which they stated that both parties had concluded the negotiations for a peace agreement after four years of talks in the Cuban capital.

The implementation of this final agreement will put a definitive end to the over fifty year-long armed conflict.

The peace accord signed in Havana corresponds to the freely expressed will of both parties and their intention of honouring the agreements.

As stated in Joint Communiqué No.93, the peace accord details every one of the agreements on the points outlined in Havana.

The statement notes that the agreement pays special attention to the fundamental rights of the most vulnerable social groups in Colombia and those most affected by the armed conflict.

The parties agreed that the implementation of the Final Agreement will contribute to the broadening and strengthening of democracy in the country, as it entails the surrender of weapons and the prohibition of violence as a method of political action for all Colombians, in order to move toward a scenario in which democracy prevails, with full guarantees for all those involved in politics, and opening new spaces for participation.

The Colombian government and the FARC-EP expressed their gratitude for the support provided by Venezuela and Chile as accompanying countries.

The Final Agreement was signed by the head of the Colombian government, delegation Humberto de la Calle, the chief negotiator of the FARC-EP, Comandante Iván Márquez; and the guarantors of Cuba, Ambassador Rodolfo Benítez, and Norway, Dag Nylander.

The announcement that negotiations have concluded does not mean a definitive agreement has been signed. As agreed by the delegations in Havana, the signing of the final agreement will take place once the peace deal approved in Havana is endorsed in a plebiscite by the Colombian people.