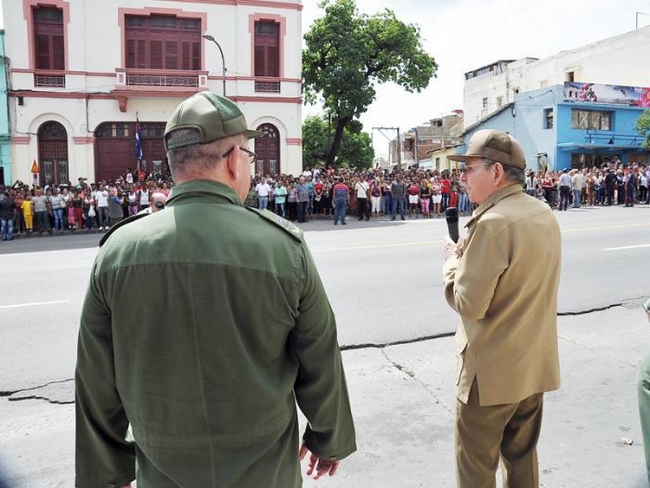 Santiago de Cuba.- On the third day of his working visit to the east of the country, Army General Raúl Castro Ruz, President of the Councils of State and Ministers of Cuba, and the National Defense Council, toured various sites of interest in this province, where he reviewed measures being taken ahead of hurricane Matthew.

Accompanied by Lázaro Expósito Canto, president of the Provincial Defense Council, Raúl arrived in the neighborhood of Abel Santamaría, where the Photovoltaic Park Solar Energy Research Center is located, a facility which features a little over 10,000 solar panels, almost 9,000 of which were disassembled, while steps have been taken to ensure that those remaining are protected from strong winds.

In this regard, Raúl noted that much can be learned from every phenomenon, as each one is different.

Next, the Army General moved on to Santiago de Cuba’s military regional command, where he spoke with brigades composed of forestry experts.

There, command chief Colonel Ricardo Riger Tejeda, explained that brigades were created in every province after Hurricane Sandy hit the region. These units work to support prevention efforts and once the weather event is over, help with sanitation and recuperation around the city, he noted, also highlighting that brigades have the necessary equipment to carry out their tasks with speed and efficiency.

Later, the President of the Cuba’s Councils of State and Ministers visited a facility belonging to the Ministry of the Interior where he talked with members of the Search and Rescue Detail and Fire Brigade, which have been reinforced by other MININT personnel.

While speaking to staff, Raúl recalled the participation of said groups during Hurricane Sandy and highlighted the importance of their work in these types of emergency situations.
Shortly afterward, the President of the National Defense Council made his way to the Mariana Grajales Obstetrics and Gynecology Hospital where he was warmly received by the population and Health sector directors; who updated the Cuban President on the work of staff at the facility, the state of equipment, as well as steps taken to continue providing the institution’s complete range of services and save lives, since initial actions were announced ahead of Hurricane Matthew.

After the hurricane has passed we will immediately begin work to recover from the damage Matthew may cause, stated Raúl.