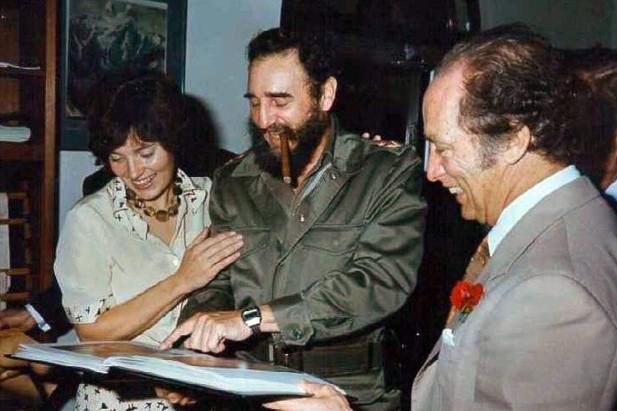 Canadian Prime Minister Justin Trudeau will pay a visit to Cuba this week, retracing the steps of a historic trip made by his father and former prime minister 40 years ago, when Pierre Trudeau forged a lifelong friendship with former Cuban President Fidel Castro despite raging Cold War tensions and the U.S. economic blockade against the island.

Pierre Trudeau spent three days in Havana in 1976, where he and Fidel Castro reportedly hit it off immediately. Trudeau famously said “Viva Castro” during his speech to the Cuban people, stirring up controversy already swirling around the visit back in Canada.

The two remained close friends and Fidel attended and served as one of the pallbearers at Trudeau’s state funeral in Montreal in 2000.

As journalist Robert Wright, author of Three Night in Havana – which chronicled the 1976 visit and the development of Pierre and Fidel’s friendship – wrote in the preface to the definitive book, when Fidel Castro showed up in Montreal for the funeral “few had any inkling of the depth of the two leaders’ mutual affection.” By that time, though, they had been friends since Justin had been a young boy.

It was at the funeral that then-29-year-old Justin, and his younger brother Sacha, met the Cuban leader. It remains unclear whether the prime minister will pay a visit to his father’s old friend on his Cuba trip, but it is expected to be on the agenda, if possible. Wright told the CBC he would be surprised if it wasn’t.

The official purpose of Prime Minister Trudeau’s Cuba visit, however, is to hold talks with Cuban President Raul Castro.

Canada helped broker the breakthrough thaw in long-frozen diplomatic ties between the United States and Cuba at the end of 2014 that has paved the way for a number of landmark developments in U.S.-Cuba relations. It’s expected that Canadian businesses will also be encouraged by the historic rapprochement and become more eager to do business with the Caribbean nation.

The roughly 24-hour visit to Cuba will be followed by a tour to Argentina and Peru, where he will attend the Asia Pacific Economic Cooperation leaders’ summit.

“Cuba and Argentina are two of our closest partners in the hemisphere," Trudeau said in a statement ahead of the trip. "I look forward to working with President Castro and President Macri to stimulate more trade and investment with Canada, grow the middle class, and foster closer people-to-people ties for the benefit of all our citizens.”

While the United States suspended all relations with Cuba during the Cold War and still upholds a decades-old economic, commercial and financial blockade against the island nation, Canada has always kept amicable relations with Cuba. The two countries trade over US$1 billion in goods every year.

According to Wright, the history of ties between the two countries has carved out a specific idea of about the place in Cuba for Canada, which usually aligns closely with the diplomatic position taken by the U.S.

"Canadians imagine a special kind of relationship (with Cuba), because it's not one the Americans had, and it all harkens back to that Trudeau visit,” Wright told Canada’s CBC News, adding that the idea is “probably disappearing very quickly” as U.S. citizens begin to flood to the island and possibilities for business slowly open up.

While Trudeau may be walking in his father’s footsteps, the kind of friendship sparked between Pierre and Fidel 40 years ago remains unlikely on the brief visit.

Cuban officials hope the visit will open conversations on Canadian business ventures in Cuba, including in the biotechnology and agricultural sector.