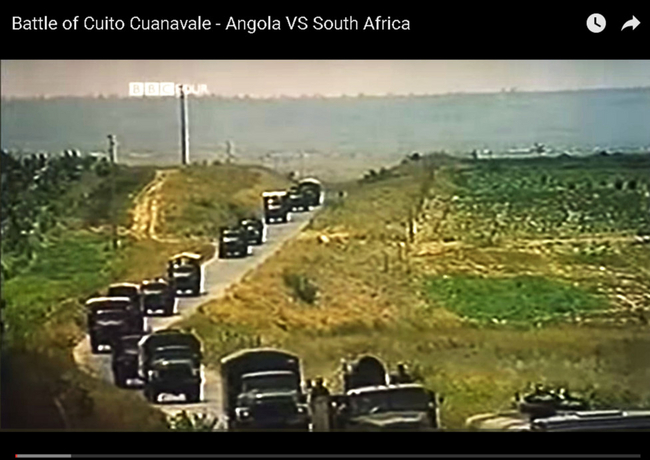 The Battle of Cuito Cuanavale is credited with ushering in the first round of trilateral negotiations, which secured the withdrawal of Cuban and South African troops from Angola and Namibia.

It was the “most beautiful cause of mankind” that motivated Castro's intervention, writes Shannon Ebrahim.

The myth that Cuba operated in Africa during the Cold War at the behest of the Soviet Union has finally been shattered. The declassification of CIA and US State Department documents and the memoirs of key foreign policy makers during the Cold War have exposed the truth.

Cuba was driven by the revolutionary zeal of its leader Fidel Castro and often made decisive interventions in Africa without consulting the Soviet leadership, and at times without their support.

The visit to South Africa this week of Italian academic Piero Gleijeses has set the record straight on what motivated Cuba’s intervention in Africa’s liberation struggles and its independent foreign policy that was at times at loggerheads with the USSR.

Gleijeses is a professor of US foreign policy at the Paul H Nitze School of Advanced International Studies at Johns Hopkins University and has written two books on Cuban foreign policy. He is also the only foreigner to have conducted research in the closed Cuban archives.

Gleijeses addressed a select audience at Liliesleaf Farm in Rivonia on Saturday, and struggle stalwarts and academics in Cape Town this week, as well as the Politics of Armed Struggle Conference, which ends at Wits on Friday.

Gleijeses presented a solid analysis on what motivated the small and impoverished island nation of Cuba to spend its limited resources to fight alongside African liberation movements. In the words of Castro himself, his comrades were fighting “the most beautiful cause of mankind”.

According to him, it was Castro’s revolutionary zeal that played a critical role in assisting African liberation movements to destroy the myth of white invincibility. From Angola to Namibia, Algeria to Guinea Bissau, it was Cuba that played a decisive role in contributing to the liberation of these African countries from colonial occupation. This has led many to ascertain that Castro was the most genuine revolutionary leader in power at the time.

What motivated Cuba was not only its commitment to the liberation of Africans from colonial occupation and Castro’s messianic sense of mission, but the need to fight the US in the developing world. By assisting liberation movements, it was hoped that the influence of the US on the African continent would be weakened.

Cuba had sought détente with the US and proposed talks in 1961, 1963, and 1964, which were rejected out of hand by successive US administrations. With the negotiations route a non-starter, Cuba resorted to a strategy of countering US influence in the developing world.

Gleijeses contends that of all the US intelligence reports he has seen, not one says Cuba intervened in Africa at the behest of the Soviet Union.

One of Cuba’s early forays on the African continent was when it provided assistance to the Algerian liberation movement against French colonial occupation. In 1961, a Cuban ship docked in Casablanca with weapons for the Algerian revolutionary fighters, and the ship returned to Cuba with Algerian orphans who were to be cared for in Cuba.

Two years later in 1963, another Cuban ship arrived in Algeria with 55 doctors, nurses and technicians to defend Algeria from Moroccan aggression. Later that year, 700 Cuban soldiers and 22 tanks were sent to Algeria. Algerians have never forgotten Cuba’s selfless solidarity.

In sub-Saharan Africa, Cuban revolutionaries were sent to the Congo to support the liberation movement and later the anti-Mobutu movement. Che Guevara ultimately pulled Cuban forces out of the Congo, disillusioned by what he called the ill-discipline and corruption of Laurent Kabila’s opposition.

Much of Cuba’s focus from 1966 was on Guinea Bissau’s liberation struggle, where Cuban doctors and troops remained until the country’s independence in 1974. According to Gleijeses, 90 percent of the doctors who supported the guerrillas of Guinea Bissau were Cuban at the time. This intervention was considered Cuba’s most successful until its intervention in Angola in 1975. On the eve of Angola’s independence, it intervened in support of the Peoples’ Movement for the Liberation of Angola (MPLA).

What changed the course of the liberation struggle in Angola and Mozambique was the overthrow of Portugal’s dictator Marcello Caetano in 1974. Following Angola’s independence, the country descended into civil war. What led to a protracted conflict was the invasion of South Africa, whose apartheid leaders saw the MPLA as a significant threat.

With the real prospect that South Africa could have crushed the MPLA, Castro took a principled decision to send Cuban troops to support the MPLA. According to CIA documents at the time, it was clear that “the Cuban presence was necessary to preserve Angolan independence”.

As Gleijeses outlined in South Africa this week, Castro was primarily motivated by revolutionary idealism, and did not even consult the USSR regarding Cuba’s intervention in Angola. This is verified by now declassified CIA documents from 1981, as well as Henry Kissinger’s memoirs, where he stated that Cuba had not acted as a proxy of the USSR and the opposite was the case.

Between November 1975 and January 1976 Cuban troops and planes poured in to Angola, with the USSR only stepping in to assist in mid-January 1976. As a result of Cuba’s intervention, South African troops started leaving Angola while black Africans celebrated.

Despite the gains made by Cuban and MPLA forces, they were not equipped with sophisticated planes and anti-aircraft missiles to match the advanced military hardware of the South Africans. Cuba’s best planes remained in Cuba to defend against a possible US attack on the island.

Unable to oust the South Africans from Angola, the Cubans withdrew to a 700km defensive line which they manned for over a decade in a stalemate. Throughout this period, Cuba pleaded with the Soviet Union for weapons to launch an offensive in south-western Angola to eject South African troops, but Soviet assistance was not forthcoming.

According to Gleijeses, the Soviet concern was that if they provided the necessary weapons to the Cubans, they may not have stopped at Angola and might have continued to Namibia. This would have implicated the USSR in the Cuban campaign at a time when Soviet president Mikhail Gorbachev was seeking détente with the US.

Cuba’s ultimate success in Angola was precipitated by a major South African attack which forced the MPLA to withdraw to Cuito Cuanavale, leaving the fighters demoralised. In November 1986, Castro held an all-night meeting with his closest aides in Havana and decided Cuba would launch an offensive in the south-west to oust South African troops once and for all.

According to Gleijeses, what enabled Castro to take such a bold decision was the fact that then US president Ronald Reagan had been weakened by the Iran-Contra scandal and had fired the extreme elements in his national security apparatus. This left Castro with little reason to fear a US attack against Cuba, which meant it could send its most sophisticated weapons to Angola.

When Castro attended the Non-Aligned Movement meeting in Harare in December 1986, he used the opportunity to travel to Luanda and plead his case to the Soviet point man in Angola. Castro was asking for weapons to “cut the cloth of the South Africans in Angola”.

Ironically, Castro’s bold decision went completely against what the Soviets had wanted. Gorbachev had called Castro’s decision “a real surprise”. Despite Castro sending the Soviets a list of weapons they wanted for the operation, the Soviets said and did nothing. It was only at the end of January 1987 that the Soviets agreed to send weaponry, but not everything the Cubans had requested.

The Cuban attack on the South Africans was, according to the head of the South African task force for Cuito Cuanavale, “a blinding and deafening strike, from an enemy that is strong and clever”. The CIA at the time also admitted that the war had taken an “undesirable turn”.

Cuba had been the decisive element in turning the tide of the Angolan war in favour of Angola’s liberation movement. As the US Assistant Secretary of State for African Affairs Chester Crocker said at the time: “It was Castro who had been driving the communist train.”

The military successes against the South Africans led to the negotiations in London on June 4, 1988, between Angola, Cuba, South Africa and the US. No one was sure of Castro’s real intentions, and even the Americans had conceded that the Cubans were capable of occupying South African bases in Namibia.

Reading the balance of forces, the South Africans gave up and in December 1988, accepted Cuban demands to abandon Angola and facilitate Namibian independence.

Were it not for the selfless intervention of the Cubans in southern Africa over the course of three decades, it would have taken far longer to liberate the region from colonial oppression. Nelson Mandela understood this, which is why Cuba was the first country outside the continent he visited upon his release from prison.

** The views expressed here are not necessarily those of Independent Media.