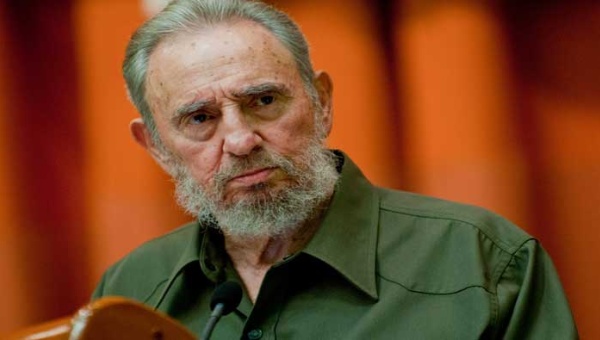 The Cuban revolutionary remained influential in Latin America and across the world for half a century.

Fidel was born in 1926 during a period when then-President Gerardo Machado was cutting off the traditional elite from its long-held power and defending the island’s sovereignty from the United States.

As a child, Fidel was sent to live in Santiago de Cuba, where he excelled more in sports than academia.

His youth was marked by turbulent politics: Fulgencio Batista became president in 1940 and ruled the country until 1944 before returning to power through a coup in 1952. With the blessing and material support of the United States, he ruled Cuba with an iron fist until 1959 in what even John F. Kennedy once referred to as “one of the most bloody and repressive dictatorships in the long history of Latin American repression.”

While studying law at the University of Havana, Fidel became increasingly involved in anti-imperialist activism. After traveling to the Dominican Republic and Colombia, Fidel sharpened his leftist politics and led protests against right-wing governments in both countries.

Upon returning to Cuba, Fidel used his legal training to oppose the Batista regime while founding an underground revolutionary socialist group called “The Movement.”

The Movement staged a failed attack on the Moncada barracks, and many—including Fidel—were arrested.

Prison was a time of learning for Fidel, who devoured authors ranging from Marx, Lenin and Marti to Freud and Shakespeare. It was during this time that Fidel made one of the most famous speeches in history, “History Will Absolve Me,” as part of his own defense in court.

Released in 1955, Fidel left Cuba for Mexico, where he met and soon befriended the Argentine Ernesto "Che" Guevara. The Movement ultimately survived and reorganized in Fidel’s newfound country, eventually assuming the name “26th of July Movement” in honor of the Moncada attack.

Fidel began his takeover of Cuba the next year, sailing to the island aboard the Granma. The few fighters soon multiplied and despite initial defeats against Batista forces, Fidel’s strategizing and sustained guerrilla attacks eventually resulted in the country being taken over piece by piece.

Despite U.S. attempts to stop him, on Jan. 1, 1959, Fidel officially declared victory in what would be the final nail in the coffin of the Batista regime.

Fidel transformed the country from one terrorized by torture, killings and dispossession to one radically committed to wealth redistribution, education and universal health care.

Domestically, he built his legacy on agrarian reform, establishing one of the world’s most ambitious literacy campaigns and developing a free, world-class health care system. He went on to nationalize companies, refineries and land and would serve as head of the Communist Party of Cuba from 1965.

In Washington, he is known for opposing U.S. aggression, most prominently the CIA’s Bay of Pigs invasion of 1961, and being a major player in the 1962 Missile Crisis that marked the peak of the Cold War with the USSR. He is also believed to have survived at least 638 assassination attempts as well as countless attempts to destabilize the small Caribbean country.

In Latin America, Fidel built the groundwork for a tight partnership between left-wing governments of the Caribbean and South America. Along with Venezuela’s Hugo Chavez, he helped found ALBA, a socialist bloc opposed to privatization and liberalization which offers a vision of post-neoliberalism rooted in principles of social welfare and mutual economic aid.

For the Global South, Fidel is a revolutionary icon who has consistently supported principles—and policies—of internationalism. He was a key figure in the Non-Aligned Movement, winning the respect of leaders across Africa, the Middle East and Asia, where thousands of Cuban troops, doctors, agricultural specialists and teachers have helped on humanitarian missions.

On April 19, 2016, at the final session of the Cuban Communist Party’s 7th Congress, Fidel addressed his audience. “This may be one of the last times that I speak in this room,” he said, “but the ideas of the Cuban communists will remain as proof that on this planet, by working with fervor and dignity, we can produce the material and cultural wealth that humans need."

It was a rare public appearance for the 90 year old, who still nonetheless penned letters and articles on global issues, influencing strategic decisions in Cuba with his moral weight. His behind-the-scenes diplomacy has also helped establish peace between the FARC and the Colombian government, and now the U.S. and Cuba through the normalization of diplomatic relations.

Suffering from an undisclosed digestive illness in July 2006, Fidel announced the transfer of presidential duties to his brother, Raul, who was vice president at the time.

On Nov. 25, 2016, his brother and fellow revolutionary Raul Castro announced that Fidel had passed at the age of 90.