From Cuba with Love 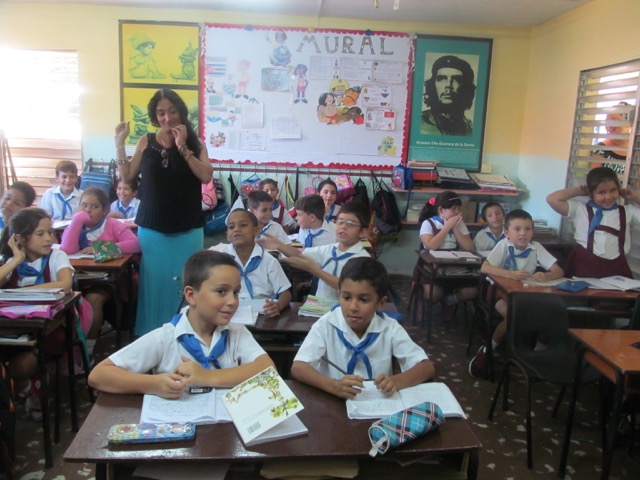 The NUT delegation visited a range of schools, including the Cesáreo Fernández Municipio Playa Primary School in Havana

Amor. Love. That is a word which, as a British special needs teacher, I cannot say has graced my head teacher’s lips during meetings about resources and support for my students.

And yet, during one school visit after another over the course of the NUT Cuba delegation programme, the word amor cropped up in the head teachers’ speeches as an important underlying principle guiding Cuban pedagogy.

Just take a moment to think about that concept: love as the bedrock of state policy.

As I observed a maths lesson in the Abel Santamaria School for the Visually Impaired in a palm-leafy Havana suburb (the school is actually located in the old Batista army barracks) I found myself pondering on how this child-centred educational policy had developed in post-revolutionary Cuba.

For Cubans, “the child is sacred” — but that would not explain why Cuba spends such a high proportion of its embargo-squeezed GDP on education.

The only conclusion one can arrive at is that Cuba has taken a deeply held popular faith in the child as a symbol of hope for the future and combined it with the socialist principle of free education for all, resulting in an extraordinary state commitment to investing in the human being as a communal asset.

In Cuba, education is something shared, a kind of invisible glue forming a profound bond between individuals and promoting social responsibility.

Back to the maths lesson in the special school.

Amid the chipped tiles, tatty textbooks and rickety desks, high expectations and pride filled the air like a triumphant salsa beat.

There were six children in the class, aged around nine, with a specialist teacher (who described to us her extensive CV of teacher training in special education) and a teaching assistant.

The maths task at hand was a challenging one, more typical of our Key Stage 3 curriculum, and

it was clear that the students were encouraged to be independent learners.

A poster on the wall declared: “Do not give me pity — give me challenge!”

What the school lacked in technical resources (there were few computers and no interactive whiteboards or projectors) it made up for in human resources; we were introduced to the school’s occupational therapist and speech therapist, both of whom were deployed full-time on site.

Later, we were given gifts of intricate hand-made paper flowers by some older students, and the handicraft teacher told us that she had herself been a pupil at this school.

Many students at the school transferred to mainstream schools once they reached “pre-university” or sixth-form age.

The students were all aiming for a fully functioning role in society when they left school, and, like all of the students we spoke to in Cuba, did not understand our questions about performance stress and the pressure of exams and results.

When I asked the head teacher if she ever had to argue the case for funding from resource-starved local authorities (which has in recent years become the sad lot of the British special educational needs co-ordinator, or Senco), her answer almost obliterated the question and bowled me over like a hurricane: “All special school funding is based on the students’ needs, and there is never any pressure on me to justify the funding I receive.”

On further questioning the head teacher, it became clear that the key to success for students with disabilities in Cuba is the home-school partnership work, which is given a high priority by all schools, whether in the mainstream or specialist sector.

Parents attend meetings at the school every second Tuesday of the month, during the school day, and are given paid time off work by their employers for this.

When I questioned whether parents and their employers buy into this, the answer I was given could be the motto of the Cuban people: “We work as a system.”

These meetings are essential in the planning of individual programmes for the students, and for the sharing of strategies which are replicated at home.

For me, the highlight of our whole week in Cuba was the musical extravaganza which was put on for us as the finale to our morning at Abel Santamaria.

As the band beat out their own arrangements of Guantanamera, Que Bella Es Cuba and other Cuban classics, members of the NUT delegation rose to their feet and started swaying to the infectious rhythms.

The musical ability of the visually impaired band members and singers was extraordinary, and their ability to connect with an audience was even more special given that many of them could not see us.

As we said our farewells, and the head teacher and staff embraced and kissed us in the typical Cuban style (we became so accustomed to this, we forgot how unimaginable it would be at a similar meeting in Britain) I felt overwhelmed, not by the heat and humidity, but by the high motivation levels of everyone I had met, and by something else, something intangible and totally alien to British educational policymakers … let me see, what was it now?

Maggie Morgan is a Senco at a West Sussex secondary school, an NUT member and school rep.

Further reports from the NUT delegation’s visit to Cuba, organised by Cuba Solidarity Campaign, will be serialised in the Morning Star’s weekend editions.