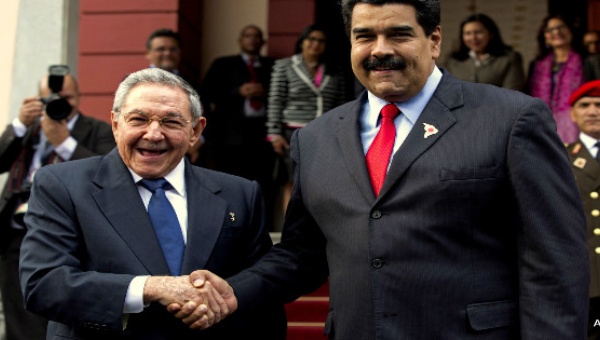 On Thursday the Venezuelan President Nicolas Maduro and Cuban President Raul Castro will commemorate the 12th anniversary of the formation of the historic progressive continental alliance, ALBA, in Havana, Cuba.

Originally launched by Cuba and Venezuela on Dec 14. 2004 as an anti-imperialist response to U.S. plans for a Free Trade Area of the Americas, the Bolivarian Alliance for the Peoples of Our America, ALBA, is a “political, economic, and social alliance in defense of independence, self-determination and the identity of peoples comprising it.”

Based on the principles of solidarity and cooperation, and a key promoter of 21st Century Socialism, ALBA is now made up of 11 countries from South and Central America and the Caribbean including Bolivia, Nicaragua, Ecuador, Grenada, Dominica, and Antigua and Barbuda. Suriname and Haiti are both allied and have declared their intention to become full members.

For the past 12 years, the alliance has worked to strengthen Latin American political and economic unity, promote the political vision of the Bolivarian Revolution, respond to U.S. interventions in the region, combat poverty and illiteracy, and promote and protect the rights of Indigenous nations and people with disabilities.

ALBA has helped launch PetroCaribe, which guarantees subsidized oil to its Caribbean members, in particular, Cuba, who thanks to the U.S. embargo had faced severe oil and gas shortages; as well as PetroSur, an organization which attempts to use oil resources to fund social development projects throughout the region. In 2008 ALBA members created a regional virtual currency, the Sucre, which is used in trade between member countries.

Maduro’s visit to Cuba also coincides with the 22nd anniversary of former Venezuelan President Hugo Chavez’s first meeting with Fidel Castro which many see as the birth of both ALBA as well as Chavez’s movement for 21st Century Socialism. In writing about that first meeting many years later Chavez wrote, "I see Fidel standing on the leg of the ladder, I was carrying a small suitcase, and I put it on the floor to give him a hug. ALBA began with that hug."

During the signing ceremony for the creation of ALBA in 2004, Fidel Castro spoke of Chavez saying, "You promised to return one day with purpose and dreams fulfilled. You have returned and become a giant, not only as leader of the victorious revolutionary process of your people, but also as a relevant international personality, loved, admired and respected by many millions of people in the world, and especially our people.”