“Fidel and Chávez set the goals, the ideas, and showed the way with their enduring example” 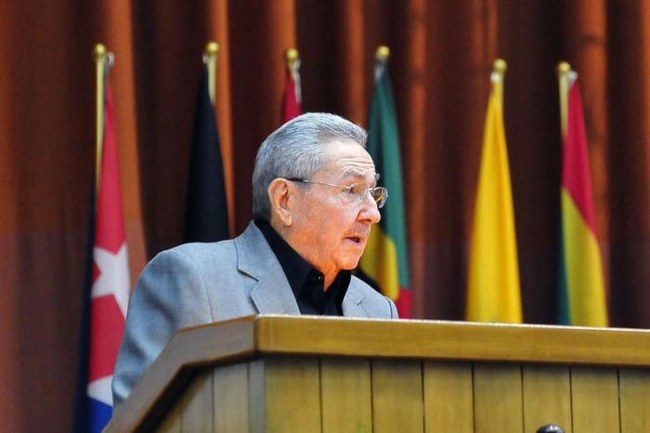 Remarks by Army General Raúl Castro Ruz, First Secretary of the Communist Party of Cuba Central Committee and President of the Councils of State and Ministers, during the act marking the 12th anniversary of the Bolivarian Alliance for the Peoples of Our America-Peoples’ Trade Agreement (ALBA-TCP), and the 22nd anniversary of the first encounter between Fidel Castro and Hugo Chávez.

Representatives of ALBA-TCP sister nations and all other Latin American and Caribbean States;

The recent history of Our America summons us here today to commemorate various events:

The 22nd anniversary of the first encounter between Comandante Hugo Chávez Frías and Comandante en Jefe Fidel Castro Ruz; the starting point of an infinite friendship and loyalty between the Cuban Revolution and Bolivarian Revolution.

Sixteen years since the signing of the Comprehensive Cooperation Agreement between Cuba and Venezuela, which established the bases of an economic, commercial and cooperation relationship, which has brought great benefits and human experiences to both peoples.

We are also celebrating the 12th anniversary of the creation, in Havana, of what was first the Alternative and later became the Bolivarian Alliance for the Peoples of Our America-Peoples’ Trade Agreement; a new form of organization to coordinate and promote the cooperation and development of member states.

We can highlight significant and eloquent results from these experiences:

Four countries have been freed of illiteracy and have made progress in providing their people with education, which constitutes the starting point for all great revolutionary transformations in any society.

Millions of Latin Americans have received free health services and over one million seven hundred thousand have had their eyesight restored.

A new, just, and complementary type of trade, free of protectionisms, began to unfold.

In an act of altruism, Venezuela created solidary trade and cooperation mechanisms to share part of its oil wealth and promote integrationist socio-economic changes in the region, without which many countries would not have been able to withstand the international crisis.

It is imperative today, to call on the peoples of Latin America and the Caribbean to stand in solidarity with this Bolivarian, anti-imperialist and immensely generous Venezuela – to whom we are so grateful – currently the victim of a great siege and unprecedented hostility by forces historically opposed to progress in our region.

Supporting Venezuela, at a time of attacks by the oligarchy, imperialism and neoliberalism, also means fighting for full Latin American and Caribbean emancipation and integration.

Working in solidarity with Venezuela means being aware of what could happen in this hemisphere if those looking to reconquer the immense riches of this country and promote hate and conflict, at the expense of free determination and peace, to which Heads of State of the region pledged, here in Havana in 2014, by signing the Proclamation of Latin America and the Caribbean as a Zone of Peace; were to prevail.

Solidarity, shared ideas and joint action are what the peoples of Our America need right now, in this time of difficulties and growing challenges.

Fidel and Chávez set the goals, the ideas, and showed the way with their enduring example. It is down to all of us to turn their legacy into the invincible trench from which to defend the American Homeland (Applause).

Martí said: “Let Venezuela call on me to serve her: I am her son.” On this memorable occasion we Cubans reaffirm: Venezuela, we are your children!

Thank you very much (Applause).