Declaration of the 15th Meeting of the ALBA-TCP Political Council 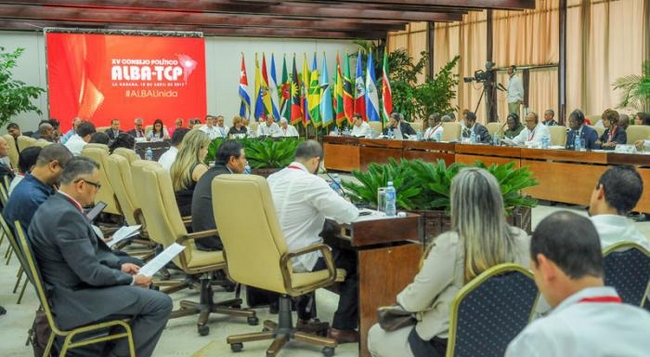 We, the Ministers of Foreign Affairs of the member countries of the Bolivarian Alliance of Latin America - People's Trade Treaty, at the 15th meeting of its Political Council in Havana:

Reject the aggression and manipulation inflicted on the sister Bolivarian Republic of Venezuela, as well as the deceit and lies that threaten its sovereignty, independence and stability, and those of the entire region.

Condemn the interventionist, illegal and pro-imperialist conduct of the Secretary-General of the OAS and his attempts to obstruct the sovereign right of the Venezuelan sister nation for participative democracy enshrined in its Bolivarian constitution, fully consistent with the United Nations Charter and the proclamation of Latin America & the Caribbean as a Peace Zone.

Demand that the OAS, the self-styled guarantor of democracy in the hemisphere, to explain its political selectivity in backing coups d'état and subversion against the progressive and revolutionary governments elected by popular vote, and its silence in regards to the forced disappearances and murders of journalists and political and social leaders.

Call on an end to the OAS' conspiratorial silence about the building of a wall against Mexico and Our America and the massive deportations of Latin American and Caribbean people fleeing poverty and insecurity in their countries, especially the deportations producing broken families and leaving children unprotected.

Condemn the attempts by the OAS to resuscitate against Venezuela, under false accusations of “threats to collective peace and stability” and by politicized and biased criteria, the interventionist words and practices which in the past led to aggression, invasions and military occupations of countries and to cruel dictatorships in the hemisphere.

Support the Bolivarian Revolution which has restored the rights and the dignity of millions of human beings within and beyond its borders; we are grateful for its generous solidarity, courage and resistance, its efforts in the interests of unity and integration within our region and we share its ideals of democracy, social justice and support for the oppressed anywhere in the world.

Commend the efforts of the Venezuelan government to develop and ensure the general prosperity of its nation, with the cooperation of all sectors of society, and its readiness to engage in wide-ranging, inclusive, constructive and courteous dialogue, free of interference or conditions imposed from outside, in the pursuit of solutions to the main problems affecting the lives of its citizens.

Recognize the tireless efforts of President Nicolás Maduro Moros's government and the president himself in fostering national dialogue and resolving disputes.

Appreciate the capacity for resistance of the valiant Venezuelan people and the civil-military union, impregnable bulwarks of the emancipating Bolivarian ideology.

Now is the time for unity, peace and hope!