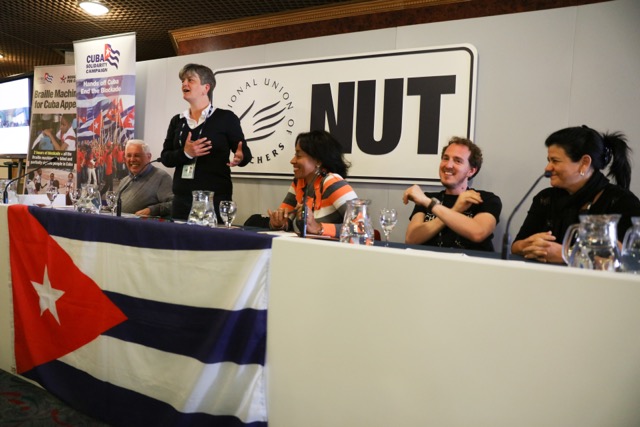 The National Union of Teachers displayed excellent solidarity with Cuba – a world leader on education - at their 2017 annual conference in Cardiff, including the invitation of two Cuban teachers from the SNTECD (Cuban teachers’ trade union), a hugely popular Cuba Salsa Social Night and a packed Cuba Solidarity Campaign fringe meeting with over 100 delegates in attendance.

Cuban teachers María Victoria Martínez Zaldívar, SNTECD Regional Secretary and Niurka González Orbera, SNTECD Executive Committee member, were invited by the NUT to meet with conference delegates where they spoke about their experience of teaching in Cuba and the impact of the ongoing US blockade on education.

Kevin Courtney said "Cuba is a Third World country, but has achieved so much in education. It spends the world’s highest percentage of GDP towards education, showing what is possible when free and universal education is at the heart of government policy – but it could achieve so much more if the blockade was lifted”.

Louise Regan spoke about her “amazing experience” in Cuba at the biannual Pedagogia Conference in Havana, a world leading conference on pedagogy.

Kiri Tunks, NUT Vice-President, chaired the fringe, with other speakers including the SNTECD guests; Niparun Nesa, Karen Parkin and Chris Smith, who reported back from the October half term delegation to Cuba; and Bernard Regan, CSC National Secretary.

The NUT Vice-President spoke about the active role that Cuban trade unions play in developing and reviewing education legislation on the island. "In Cuba, the teaching union has a veto on education policy - that is something to aim for here!” she said.

Kiri reported back from her experience in leading the NUT October half term delegation to Cuba, where 22 NUT delegates visited primary, secondary, music and special needs schools and met with teachers and the Cuban trade unions.

Primary school teacher Karen Parkin, who attended the delegation, said: "I remember a time in Britain when the syllabus was rich and varied - in Cuba it still is.” Delegates Chris Smith and Niparun Nesa both spoke about their inspiration experiences on the delegation and how we have much to learn from the Cuban education system and the spirit of the Cuban people.

In a presentation on behalf of the SNTECD, Niurka González Orbera said: "Despite all the difficulties from the blockade, the Cuban government ensures that all children have uniform, school places and meals for free.”

"If a child in Cuba cannot attend school due to ill health, the government ensures that a teacher visits them at home or in hospital”, she added.

CSC National Secretary Bernard Regan rounded up the fringe meeting, urging that solidarity is needed to support Cuba in its struggle to end the US blockade and return Guantanamo to the Cuban people. "The US blockade of Cuba is still in place and we need international solidarity to help end it”, he said.

A highlight for many at conference was the Cuban Salsa Night on the Saturday evening. Conference delegates danced along to an excellent set from a full live Cuban salsa band, Omar Puente and the Raices Cubanas, where Omar successfully taught the crowd some salsa moves. The Salsa Night raffle raised over £400 for the NUT Braille Machines for Cuba appeal, which will go towards sending Braille machines to schools for visually impaired children in Cuba. Braille machines are just one of many items that Cuba struggles to obtain due to US blockade legislation.

CSC ran a busy stall at the conference, with new members signing up, new branches affiliating to the campaign, and many delegates pledging to raise funds to send Braille machines to Cuba.

The NUT / CSC Braille machine campaignleaflet can be downloaded here

The full speech from the SNTECD guests has been kindly translated by NUT member Robin Pardo Roques below:

It is a pleasure for us to share with you these sessions that will allow us to exchange, reflect, debate and also learn. Undoubtedly, these actions will strengthen us all and make the bonds of friendship and solidarity that exist between our organizations and people increasingly solid.

The initial Constituent Congress of the Union was held from 22nd to 24th November 1961, and was attended by 1093 delegates. The event consisted of representatives of the different teaching organisations, as well as non-teaching workers that existed at that time, meeting together in one place.

Fifty five years have passed since the creation of our Union and its 1082 provisional founding members; today we have 12,267 Union branches.

In order to run our trade union organisation, we have a National Committee, a Provincial Committee in each of the 15 provinces of the country and a Municipal Committee in each of the towns or cities. There is also a small group of colleagues, whom we call activists, whose essential work is to lead the Union at each level - except in grassroots organizations. There are 168 Municipal Committees and 15 Provincial Committees which all form part of the structure that forms the Union. These are the means by which the SNTECD disseminates guidance to the executive and the Union in general. The executives are situated in centres of work that have a high number of affiliates, such as universities.

The SNTECD organizes, educates, prepares and mobilises workers according to their particular occupation, the social activities within the country and for socialist emulation. It must also represent its members before the State and general public.

The Union, in its work with the workers, commits them to provide quality and efficiency in pedagogy, sports work and in scientific and technical activity; the objective of which is to raise the level of information and political preparation with the goal of achieving strong ideological convictions that translate in to action. The Union also exists to attend to any concerns and considerations the workers may have.

Our workers are actively involved in decision-making through their representatives within the different levels of the Union’s structures; from the national level to places of work, our Union is represented. In this way it contributes to a high level of member participation and a sense of belonging. This establishes unity between our membership in the revolutionary process and the political-ideological battle to boost the economy of the country.

The number of organizers in the trade union structures amounts to 39,843, of which 3,459 are at executive level. The number of grassroots organisers who are women amounts to 28,699, accounting for 72.03%.

The Union consists of five pieces of integral mechanism for the development of trade union work in order to achieve greater efficiency and quality; these are:

Membership: Achieving membership for all workers is an essential prerequisite for the development of trade union work.

The assembly of members is the major body of the Union, free and sovereign to adopt motions contributing to the strengthening of trade union work and the fulfilment of economic and social objectives. It takes place monthly and in it the organisers and executive are accountable to the workers in simple, clear, concrete and precise language. They must detail the completion of any work that has been developed and propose measures to resolve any problems that have arisen. Similarly, the Union executive reports on its work and presenting the results of the analysis of their performance evaluation in relation to emulation. It is worth mentioning a key quote from the Cuban Union leader and founder of the Central Union of Cuban Workers (CTC), Lázaro Peña, "Without a general assembly there is no democracy and leadership is isolated from the masses. Without a general assembly, the workers do not have a forum in which to discuss their ideas, requests or disapproval".

Members in the assemblies discuss the quality of education, actively participate in decision-making and in the preparation of budgets and their execution - always under the motto that you cannot spend more than you have. It is a space not only to achieve economic rationality, but also a space of communication and meeting in which the Union and organisers work for common objectives, each with their own methods for raising the quality of education, recognising the best performance, strengthening the education of values ​​and overseeing the integral development of all members.

The assembly of representatives: is an important space for feedback and finding solutions to the main suggestions and agreements derived from affiliated members’ assemblies. These are chaired by the main executive and Union leaders.

Socialist Emulation is the force behind the drive for efficiency and quality in every educational and sports centre. Its action is aimed at promoting and stimulating permanent differentiated improvement and raising the scientific, technical, political and cultural knowledge of workers and trade union leaders. The objective being a climate of collaboration, cohesion and reciprocal exchange so that each one of the workers feels better served. In addition our Union has designed mechanisms to recognize outstanding workers.

The Collective Bargaining Agreement is established between the Union and the school administration. It is planned so everything can be done to enhance the effectiveness and quality of educational and methodological work, professional development of teachers, level of duty of care, health and safety at work and the promotion of collaboration. It underlines the principle that duties and rights go hand in hand. It is a working document that systematically evaluates compliance with what has been agreed upon and, because of its flexibility, can incorporate new tasks in the course of its application. The Labour agreement strengthens work place, technical and productive discipline.

Cuban educators also carry out various tasks that we undertake in order to ensure that our workers achieve greater results in their work. One of the main tasks in recent years has been to resolve the contradiction between mass education and the quality of education. In order to tackle this the preparation and professionalism of teachers has been fundamental, placing the mechanisms of Union work hand in hand with the improvement of the educational system.

Another of the fundamental tasks has been to guarantee the efficiency of the mechanisms through which workers participate in various activities. It is important they take part in decision-making on project organisation, control of the development of teaching and learning, aspects of legislation and the creation of increasingly adequate working conditions - according to the possibilities of the country.

Our educators carry out actions of solidarity, demonstrating our attitude of collaboration with different countries; this takes place through the programs and agreements established by the organizations to which they belong. In this way the Union works in order to achieve greater levels of knowledge and political-ideological understanding for those that participate in this process.

The ethical code of Cuban pedagogues has been a faithful supporter and exponent of the Revolutionary, Marti, Marxist and humanist ideologies. Their content of moral values ​​expresses the interest of the working masses in the permanent struggle for the defence of the socialist social project of independence and national sovereignty; in other words the pursuit of social justice and dedication to the full dignity of man.

The political-ideological work - the formation of values ​​in the students and in the educators themselves together with the strengthening of convictions - have been priorities in the work developed lately. This has been especially important in recent years, in which the ideological confrontation with the historical enemies of the Revolution has acquired extraordinary dimensions.

Also in this period, the Union is working in order to contribute, from our status as educators, to the updating of the Cuban Economic Model; we have created opportunity at grassroots level for actions to take place that contribute to realising the Economic and Social Guidelines of the Revolution - as approved in the 7th Congress of the PCC - which has, among its fundamental aspects, an analysis carried out by the workers in to the ways that budgets provided to each centre of work are utilised.

Additionally, our Union also condemns the unjust blockade that the United States has subjected us to for more than 50 years.

Thank you very much