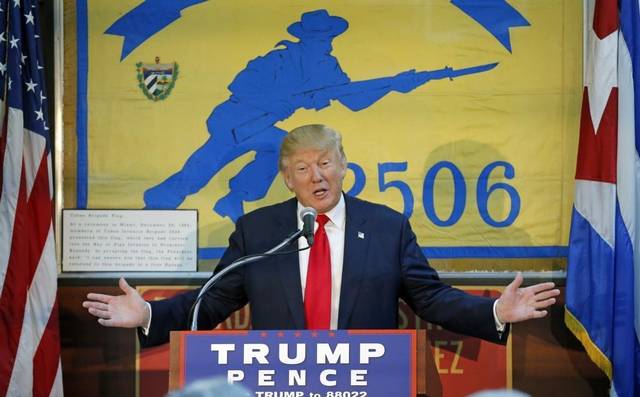 Expected changes could include tightened trade and travel restrictions.

United States President Donald Trump is expected to make good on campaign promises to take a harder stance toward Cuba during a visit to Miami on Friday, possibly announcing a reversal of his predecessor Barack Obama's easing of the half-century long blockade.

Aides and officials in Trump's administration are currently processing new policy recommendations to be given to the President, which will then be announced on June 16th during a speech, U.S. officials told Reuters.

Among the expected changes reported are tightened trade restrictions, including a ban on U.S. companies doing business with Cuban military affiliated enterprises.

Renewed travel restrictions for U.S. citizens are also expected. However, the exact nature and reach of the policy changes Trump will propose remain unknown for now.

Representative Rick Crawford, one of the Republican officials who sent the letter, tweeted that a policy of engagement with Cuba is “a national security imperative.”

Within Congress, Florida Senator Marco Rubio, and Miami Representative Mario Diaz-Balart take a hardline stance opposing the opening of U.S.-Cuba relations. According to the Miami Herald, Diaz-Balard has expressed his support for Trump's anticipated announcement, and has said he is “confident” that the president will deliver on promises to crack down against what he referred to as the Castro "regime.”

If the announcement is to reflect his campaign rhetoric, Trump will mostly likely justify the tightening of the blockade on the basis of alleged “human rights abuses” on the island.

Before his election, Trump made attempts to court the large population of Cuban-Americans living in Miami who are a consistant conservative stalwart for the Republican Party.

Although there is popular support for the revolutionary leadership among those living within Cuba, many Cuban-Americans are opposed to the revolution and the leadership of the late Fidel Castro and his brother Raul.

“The United States should not prop up the Castro regime economically and politically, as Obama has done and as Hillary Clinton plans to do,” Trump said in a speech in Miami prior to his election.

The U.S. has maintained an economically crippling blockade against Cuba for half a century, cutting it off from a great deal of international trade.

Although the policy of engagement advocated by Obama and many other contemporary U.S. politicians has eased certain aspects of trade and travel, the majority of the sanctions have remained untouched.

In the face of the economic difficulties imposed by this policy, the communist island has managed to make unparalled gains in health-care, cooperative agriculture, education, literacy, international aid, and LGBTQ rights.