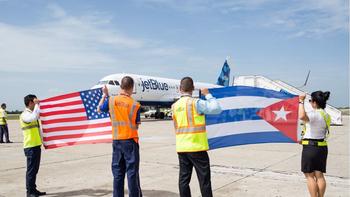 As the Trump administration prepares to reveal a new U.S. policy toward Cuba, with a presidential announcement expected in Miami on Friday, a poll shows a majority of Americans support policies that expanded trade and tourism with the island nation.

The current policy is supported across age, gender and political affiliations, with 60 percent or higher from all groups, including Republicans.

The survey was conducted by Morning Consult on behalf of Engage Cuba, an organization that favors continued — and expanded — liberalization of U.S. policy toward Cuba.

Engage Cuba’s stated goals are ending continuing limits on travel and trade and facilitation relationships between U.S. businesses and Cuba.

In 2014, Obama ended more than 50 years of U.S. attempts to isolate Cuba, ushering in sweeping changes that that allowed increased travel, business and communication links and restored diplomatic relations.

Last year, on the campaign trail in Miami, Trump condemned Obama’s normalization of relations between the two countries, which he called a "one-sided deal for Cuba and with Cuba, benefits only the Castro regime."

"You'll be very happy," Trump said in September. "I have so many friends from Cuba. Incredible people."

Sean Spicer, the president’s press secretary, was asked Monday if Trump would undo all of Obama’s policy on Cuba or just some of it.

Spicer avoided the subject, calling the question “a good try. I will say that when we have announcement on the president’s schedule we’ll let you know. But just stay tuned. We have a very busy week and an ambitious agenda this week.”

Engage Cuba’s release of the survey — conducted Mary 23-25 — was timed to precede the announcement of Trump’s decision.

“The overwhelming support of the American people for continuing this policy of Cuba engagement should serve as a warning flag to President Trump,” Engage Cuba president James Williams said in a statement.

Williams slammed two of the leading proponents of scaling back the Obama-era policies, U.S. Sen. Marco Rubio, R-Fla., and U.S. Rep. Mario Diaz-Balart, a Miami-Dade County Republican. “A decision to roll back these broadly supported policies could only mean backroom politics at its worst is rearing its ugly head. The political and personal interests of two members of Congress should not outweigh the will of the American people and the best interests of Cubans on the island.”

Rubio and Diaz-Balart, who are Cuban-Americans, have disagreed with Obama’s liberalization from the moment it was announced. Their position is that it does nothing to advance the conditions of the Cuban people. Even worse, they have argued, it strengthens the oppressive Cuban regime.

Last week, Republican Gov. Rick Scott wrote that “repression is growing and the brutal crackdown of the peaceful opposition movement is most alarming.” Scott, a prominent supporter of Trump, called for a “substantive shift” in U.S.-Cuba policy.

Morning Consult’s online survey for Engage Cuba questioned 1,973 registered voters. It said the margin of error is plus or minus two percentage points.

Morning Consult’s polling operation is used by companies and partners with several national news organization. Its polls are conducted online, through panels of respondents who get text messages, push alerts or emails asking them to complete the survey.

Engage Cuba released just two questions, so there’s no way to know if other questions produced different responses or how much information respondents were given about the Cuba issue.

Question: As you may know, the U.S. recently changed some of its policies towards Cuba, that allows for increased travel to the country, as well as some importation of Cuban rum, Cuban cigars and additional opportunities for U.S. companies to do business in Cuba. Do you support or oppose these recent policy changes?

Question: Do you support or oppose the U.S. ending its trade embargo on Cuba, which would allow U.S. companies to do business in Cuba and Americans to travel freely to Cuba as tourists?