Statement from the FMC in response to threats by the U.S. President 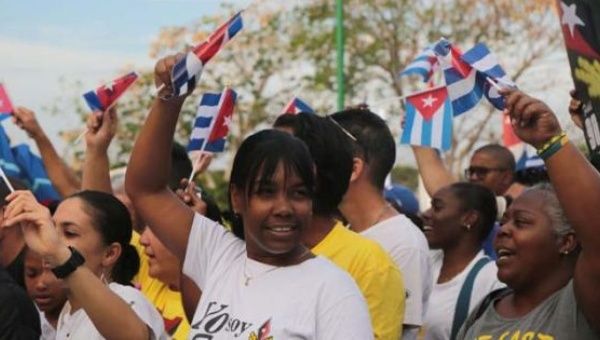 Accustomed to struggling and resisting, we Cuban women state to U.S. President Donald Trump, that we do not accept walls, intervention or threats from anybody, and much less from those who wish to disregard the legacy which has sustained and motivated us for centuries

We cannot remain silent in the face of such ignorance.

The President of the United States is violating the human rights of the Cuban people with his new policy toward Cuba which reinforces the blockade. The over four million members of the Federation of Cuban Women denounce, before the world, the measures announced, which constitute an act of political aggression against the Cuban people, including women, children, and adolescents, in its aim to make their daily lives more difficult.

As such, we firmly support the declaration by our Revolutionary Government.

It is an insult to describe Playa Girón mercenaries as heroes. If they have forgotten history, or pretend to have done so, there are the testimonies from Nemesia and her siblings, who saw their mother die during the invasion; there are the families of the youth who offered their lives defending their country.

They also fail to recognized the bravery of Cuban mothers who took to the streets demanding an end to the murder of their children, including that of Frank País, in which Bonifacio Haza – a henchman for the Batista dictatorship and father of the out-of-tune violinist - was involved.

Last January 21 hundreds of thousands of women around the world came out to protest against Trump's misogyny and sexism, a man who publicly mocked a disabled journalist.

A pregnant African-American woman was recently shot and killed by police in Seattle, adding to the rising number of Blacks killed at the hands of the U.S. police force. What moral right does the U.S. President have to lecture Cuba about human rights?

Cuba is one of the countries which offers the most physical and moral protection to its people in the world, where the dignity of the people is at the center of social policies. One only need look at the levels of development achieved by Cuban women, the financing that our country devotes to health, education and social security programs, among others, in order to understand the deeply humanist dimension of our Revolution.

Accustomed to struggling and resisting, we Cuban women say to you (President Trump), that we do not accept walls, intervention or threats from anybody, and much less from those who wish to disregard the legacy which has sustained and motivated us for centuries.

We Cubans have never given in to coercion of any kind. It would do well for you to read the history of the Maceo-Grajales family to discover the mettle of which our nation is forged.

We will always be ready to defend the gains achieved for and by Cuban women. The struggle for peace will be our permanent banner in order to protect our children’s future. Once again we proclaim that, inspired by the teaching and example of Fidel and Vilma, with or without the blockade, we will continue to build our socialist, inclusive, and participative homeland.