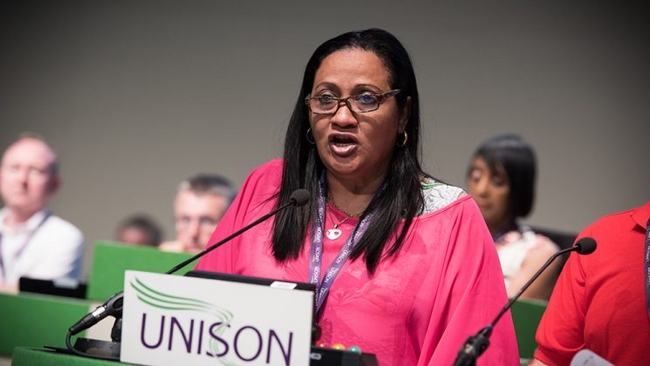 “The challenge for trade unions today is to contribute to real social integration for the people … and to the better world we all aspire to.”

And that was the challenge to delegates from guest speaker Dulce Maria Iglesias Suárez, general secretary of SNTAP, the Cuban public services union, when she addressed UNISON’s local government conference in Brighton this afternoon.

Describing how the economic failure and social disaster of the global financial meltdown has been “devastating for the poorest of the world,” she said that neoliberal governments have created threats to the world itself and to people across the planet.

“Neoliberalism is not a viable system and its social consequences are disastrous.

“The alternative is to globalise solidarity and co-operation” and trade unionists have a responsibility to work toward that.

“We have the right to construct a different world to the world they’re trying to impose.”

Quoting Fidel Castro from 1998, she told delegates: “The future depends on ourselves. Globalisation should be a globalisation of brotherhood, sustainable development and fairness of resources.”