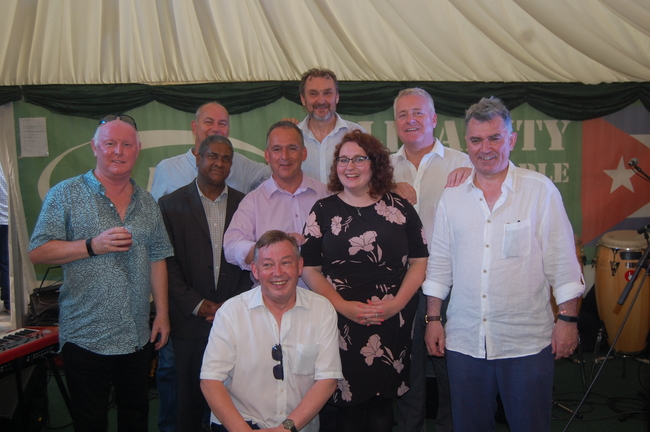 Guests at the capacity event were treated to an Cuban-style fiesta with rallying speeches, stand up comedy, live music, dancing, food, drink and great weather on the summer solstice - the hottest June day in over 40 years!

Ian Lavery MP and Ian Mearns MP both gave barnstorming speeches on Labour’s recent electoral gains in the general election and paid tribute to all the trade union support.

“Donald Trump has recently rebuilt the US blockade of Cuba… When we are in government, we will break the blockade,” Shadow Chancellor John McDonnell announced to huge applause.

“I saw first hand the impact of the US blockade - it affects all aspects of life in Cuba, where they struggle to obtain many basic goods. But despite the blockade, they have achieved so much, with some of the best health and education systems on earth. But if the blockade was lifted, they could achieve so much more”

RMT general secretary, Mick Cash, began his speech with a tribute to the Grenfell Tower disaster victims with a message of solidarity from the union.

Concluding his speech he said: “The RMT Cuba Garden Party is the biggest fringe event of our movement. Cuba deserves our solidarity in their struggle to end the ongoing US blockade."

Kevin Courtney, NUT general secretary, spoke about the solidarity that the NUT has shown with Cuba, including supporting English language training to Cuban internationalist medics, some of whom went on to treat the Ebola outbreak in West Africa.

“Cuba needs our solidarity” he said. “Although Cuba is a Third World country, they spend more of their GDP on education than any other country on Earth. This achievement must be celebrated.” Dave Ward, CWU general secretary was also due to speak but could not attend due to illness. wever, he passed on his message of solidarity greetings.

Comedian Mark Thomas gave an entertaining set including material from his People’s Manifesto tour. Holding a copy of his People's Manifesto, he said, "My manifesto has lasted longer than Theresa May's!"

Omar Puente and Raices Cubanas energetic set of Cuban salsa got the crowd up on their feet and the Alabama 3 entertained with their politically fiery “brand of country acid house music.” Wearing an RMT hard hat, front man Larry Love, changed the lyrics in their huge hit “Woke up this morning”, to “Woke up this morning, joined the RMT”.

One lucky winner went home with a prize of two return flights to Cuba from the Blockade Buster Raffle, which raised over £2,000 for CSC’s vital campaigning work against the US blockade.

Jorge Luis García, the Cuban Embassy’s political counsellor, thanked the crowd of trade unionists and activists for their support. “The achievements of the Cuban Revolution cannot be separated from the international solidarity that we have received.

“International solidarity must continue in our fight to end the US blockade and return the illegally occupied territory of Guantánamo Bay”, he said.