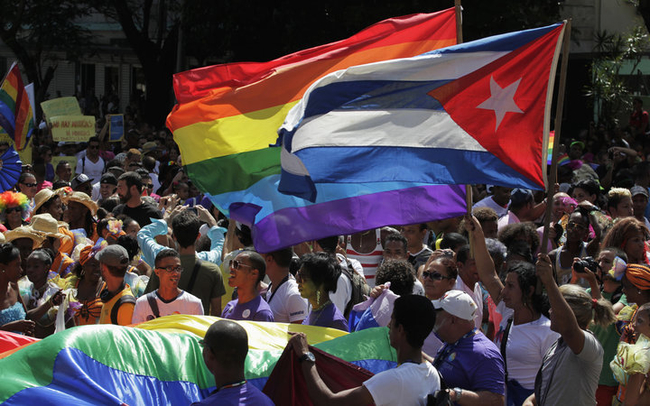 Twenty-five years ago Cuba broke new ground with the first overtly gay film “Strawberry and Chocolate” directed by Tomás Gutiérrez Alea and Juan Carlos Tabío. Set in 1979 it is the story of a flamboyant gay artist Diego who attempts to seduce a straight and idealistic young communist called David but without success. David conspires to befriend Diego so that he can monitor the artist's subversive life for the state yet as they discuss politics and the nature of free artistic expression a genuine friendship develops between the two.

It could almost be a parable of the evolving promotion of gay rights in Cuba that has been in train for decades. Take for example the LGBTQ cultural centre known as El Mejunje, meaning The Mixture, located in the centre of the city of Santa Clara. Founded in 1985 it is an open space shared by everyone regardless of sexual orientation in order to promote social integration and includes a theatre, a café, an art gallery and a small music venue ranging from rock and roll to Cuban folk music. Activities also include social and cultural initiatives aimed at both children and adults, film screenings, and there is a LGBTQ disco every Saturday night.

Also discrimination in the workplace on the grounds of sexual orientation is now illegal in both the state and private sector with recent legislation imposing fines and suspending the licenses of those employers who discriminate on the grounds of race, gender or sexuality. Sex-change operations were legalised as long ago as 2008 and are carried out at no cost to the patient with dozens being performed in the last year.

Yet the leading light in the campaign for gay rights has been Mariela Castro, the director of the National Centre for Sex Education (CENESEX), who is a member of the National Assembly and daughter of former President Raúl Castro. CENESEX has been advocating same-sex marriage since 2007 and now Cuba is set to become the latest country in Latin America to approve gay marriage after the National Assembly recently approved a new constitution that defines marriage as “the consensual union of two people, regardless of gender”. This replaces the current constitution’s definition of marriage as the “voluntary union between a man and woman”. The new constitution will be put to a referendum later this year.

Needless to say the churches are opposed on the whole to any such change to the traditional understanding of marriage and five Protestant denominations have openly criticised the move. The Roman Catholic Church’s position is that homosexual inclinations are “intrinsically disordered” although gay people should be accepted with respect, compassion and sensitivity. Yet Pope Francis is on record as saying that he is in no position to judge and that gay people should realise that God loves them and made them like that so they should love themselves. The Anglican Communion is divided on gay issues and same-sex marriage in particular with some branches actively providing gender-neutral wedding services or a blessing of civil unions. The Methodist Church is in the process of reviewing the whole concept of marriage which includes the possibility of gay weddings.

The problems about sexuality which continue to sap the churches’ energies are really about gender. Early Christianity understood women’s bodies to be inferior versions of the superior male body but this was replaced during the Enlightenment with a binary model which prevails to this day. As a result of this understanding a pattern of patriarchy, androcentrism and sexism emerged in both church and society that has been challenged by the both the sciences and the feminist movement which paved the way for a more enlightened attitude towards sex, gender and sexual orientation that is more fluid and increasingly seen as forming a spectrum or continuum. It is in this context that marriage is being evaluated so that even on a traditional understanding marriage is now seen more as an equal partnership than a question of the woman being subordinate to the man. All of which is a far cry from the bride’s promise in the medieval marriage rite “to be bonny and buxom at bed and at board” where the relationship was bound up with the idea of property!

It remains to be seen whether Cuba’s inclusion of same-sex marriage in the proposed new constitution is ratified by the people so that it joins Argentina, Uruguay, Brazil, and Colombia in Latin America in recognition of gay marriage. Homosexuality was an issue in the early days of the Cuban Revolution and the country has made great strides in the area of LGBTQ rights compared with seven other Caribbean island nations where homosexuality is a criminal offence. If approved Cuba’s evolving social project is set to become even more revolutionary.

Father Geoff Bottoms is a Catholic Priest and member of the Cuba Solidarity campaign Executive Committee. He will be leading the In the Footsteps of Che Study Tour to Cuba in November 2018 including visits to El Mejunje.