The US blockade of Cuba is getting worse 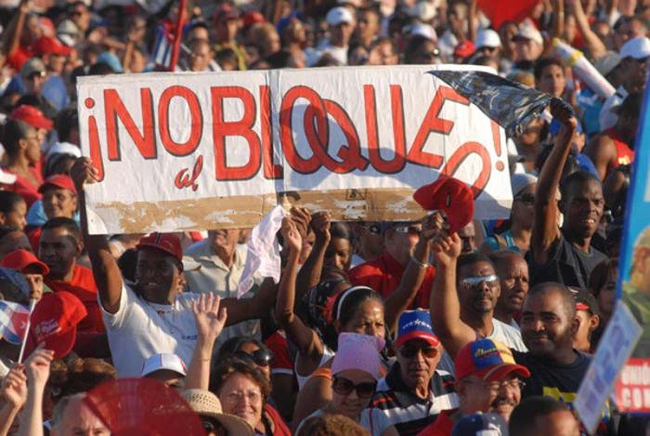 TODAY the United Nations general assembly will once again vote on Cuba’s annual resolution calling for an end to the US blockade.

Cuba’s resolution, Necessity of ending the economic, commercial and financial embargo imposed by the United States of America against Cuba, has been presented annually to the UN body since 1992 and overwhelmingly passed each year.

In 2017, 191 countries, including Britain, voted in favour of the Cuban resolution, with only the US and Israel voting against. A similar result is expected this year.

The Cuba Solidarity Campaign (CSC) has once again written to the British government urging it to continue to vote in support of ending the blockade which not only harms the people of Cuba but also impacts on our own country.

In advance of the vote, Cuba has published its report that summarises the blockade’s impact, where it states that the nearly six-decade-old blockade has cost the Cuban economy over a staggering $933 billion.

The report outlines in detail the blockade’s brutal impact on health, education, food, sport, culture and development over the last year.

There are hundreds of examples, including cases where Cuba has been unable to obtain crucial aircraft safety components, chemotherapy drugs for malignant brain tumours and medical equipment that can help diagnose cancers.

The extraterritorial impact around the world is also analysed, including the case of the Open University (OU) which banned Cuban students from applying to study there before a huge campaign by CSC, trade unions, parliamentarians and supporters forced the OU to reverse its discriminatory policy last year.

The report also includes elements of the US policy’s impact on special needs schools provisions, specifically the difficulty in purchasing Braille machines that are manufactured and sold in the US.

CSC and the National Education Union (NUT section), have worked together to beat the blockade by sending dozens of Braille machines to schools across the island over the two years. This week, the NEU/NUT third annual October half-term delegation of teachers to Cuba has taken over eight more Braille machines with them to support children’s learning at the Abel Santamaria School for visually impaired children.

The banking problem faced by the Cuban embassy in London over the last 12 months is also included in the report, with HSBC, Barclays and NatWest all temporarily freezing the embassy’s accounts in 2017.

CSC has also felt the impact of the blockade first-hand, when the Co-operative Bank unilaterally closed our account in 2015, citing fear of US fines enforced by the Office of foreign Asset Control (OFAC).

British and overseas banks have paid huge multimillion-pound OFAC fines due to blockade legislation in previous years. It is incredible that 49 international companies paid fines totalling over $14 billion during the eight years of Barack Obama’s presidency alone.

This means that British companies are being fined by the US for a blockade policy that is opposed by the British government. The extraterritorial tentacles of the US blockade policies are far-reaching and an affront to British sovereignty.

For example, a British citizen wishing to visit Cuba may search for a flight on Virgin Atlantic’s website.

Go to confirm and purchase the flight booking and they’ll be met with a pop-up window that reads: “We’re sorry, we can’t complete this booking online” and they must call a unique phone line for Cuba flight bookings and go through the entire booking process again with a call centre operator.

Virgin Atlantic uses an online ticketing system with Delta, a US company, which will not process UK-Cuban flights due to US restrictions, despite Virgin Atlantic being a British company.

Next, they may wish to book a Cuban hotel on Booking.com (a subsidiary of US company Priceline). Before purchasing the hotel booking, they must certify their reason for travelling to Cuba from the US Treasury Department’s Office of Foreign Assets Control (OFAC) list of permitted activities, to ensure that the booking satisfies the "criteria for a general travel licence to Cuba."

The drop-down menu options for travel includes “support for the Cuban people” and “humanitarian projects” — US jargon for destabilising activities.

Britain has no such laws, licences or restrictions in place. These are US interventionist policies that are impacting on British tourists who may wish to travel to Cuba.

Finally, they may want to book travel insurance. Go to Santander.co.uk and they will find that Santander provides “Worldwide cover (excluding Cuba).” Cuba is the only country on earth that Santander will not provide cover for, so they’ll have to look for insurance with another provider.

Such barriers can and will put many people off from travelling to the island — the very intention of the blockade policies.

Cuba describes the blockade as “the most unfair, severe and extended system of unilateral sanctions ever applied against any country” in its report and highlights how the Trump administration “has intensified” the policy that “continues to be applied with all rigour.”

Trump’s new Cuba policy, announced at a rally in Miami in June 2017, has all but closed the US embassy in Havana, made travel and trade increasingly difficult and blacklisted more Cuban state companies.

His new US measures have led to a 43 per cent decrease in the number of US visitors to Cuba, equivalent to 51,677 fewer travellers than in the same period in 2017, according to the UN report.

Dozens of banks across the world have ended their relations with Cuba or foreign companies with ties to Cuba, including preventing Cubans resident abroad from making transfers home — all damaging the Cuban economy further.

The annual vote at the UN provides a timely reminder to revisit the question as to why the blockade exists in the first place.

The US introduced the blockade to cause, in the words of the State Department, “hunger, desperation and the overthrowing of the government.”

And just last month, President Trump, like all his predecessors since John F Kennedy, signed off the Trading with the Enemy Act against Cuba — a key part of the blockade legislation.

Why is Cuba “the enemy?” Because Cuba is sovereign, independent and the threat of a good example 90 miles off the US coast.

These achievements that have focused on humanity over profit have taken place under the most difficult circumstances imaginable due to the US economic warfare, but they could achieve so much more without the blockade in place.

While Trump is on the offensive against Cuba and progressives across Latin America, Cuba has consistently shown hope in its resistance to the US onslaught.

If 191 countries continue to vote in support of Cuba’s resolution, it is a testament to the Cuban people’s resistance and to international solidarity with the blockaded island.

Our international solidarity can and does make a real and direct difference to the Cuban people and we are proud of our collective efforts, but we shouldn’t have to go to such lengths to get Braille machines into special needs schools in Cuba.

The US should put an end to the economic warfare against Cuba immediately and the British government should do more to oppose the US extraterritorial policies, defend UK sovereignty and support British companies and individuals that wish to trade with and travel to Cuba.

TAKE ACTION: Write to Sir Alan Duncan MP today to urge Britian to vote in favour of Cuba's resolution and to stop US attempts to sabotage the UN general assembly vote https://cuba-solidarity.org.uk/action/