UN votes 189-2 to condemn US blockade of Cuba 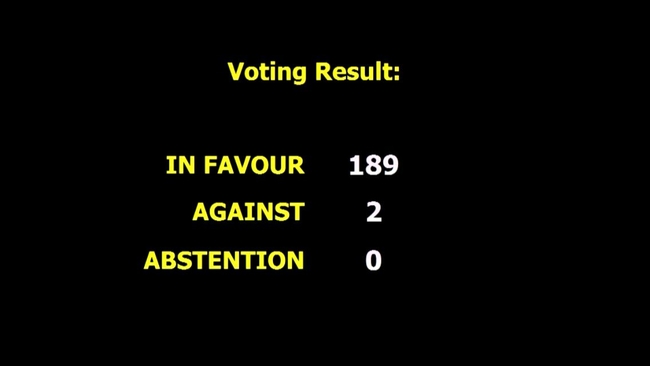 Only Israel backed the US in opposing the resolution calling for an end to the 60-year-old measure aimed at isolating and suffocating the Cuban Revolution. The two countries were the only ones to oppose it last year as well.

Every year the UN general assembly overwhelmingly censures the US for its crippling economic and financial embargo on the socialist island. This year’s vote was originally due yesterday, but the Donald Trump administration delayed it by 24 hours by forcing votes on a series of wrecking amendments first.

On behalf of the Group of 77 — an umbrella for 135 developing countries including China — Egyptian ambassador to the UN Mohamed Edrees said he regretted increased US hostility to Cuba under President Donald Trump.

Easing of travel restrictions and money transfers to Cuba under Mr Trump’s predecessor Barack Obama had been “positive steps ... in the right direction,” he said, but Washington’s new policy was “aimed at strengthening the embargo against Cuba.

“This is a setback in the process of achieving normalised relations.”

The G77 appealed to the international community to step up its efforts to have the blockade lifted.

Bahamas ambassador Sheila Carey expressed the Caribbean Community’s “unequivocal opposition” to the blockade, which is estimated to have cost Cuba $933 billion (£718bn) over the past six decades. She warned the US that its policy was disapproved of worldwide.

South Africa’s Jerry Matjila said the blockade had caused “immeasurable damage to the development of the people of Cuba and remains, as ever before, unjustified.”

Additonal report from ACN: Cuban hands the US another overwhelming defeat at UN

HAVANA, Cuba, Nov 1 (ACN) A new and overwhelming NO to the policy of hostility, aggression and economic war that the U.S. government has maintained against the people of Cuba for almost 60 years was reaffirmed today at the headquarters of the United Nations, when an absolute majority of countries voted in favor of the resolution Need to end the economic, commercial and financial blockade imposed by the United States of America against Cuba.

The document presented by Cuba, which has been approved 27 consecutive times, obtained the favour of 189 countries and only 2 opposed it, the United States and Israel, while no country abstained.

Meanwhile, the 8 amendments introduced by the United States failed to achieved the two thirds required to be included in the resolution and were rejected by the majority of the UN state members.