Cooperation with no obstacles or interference 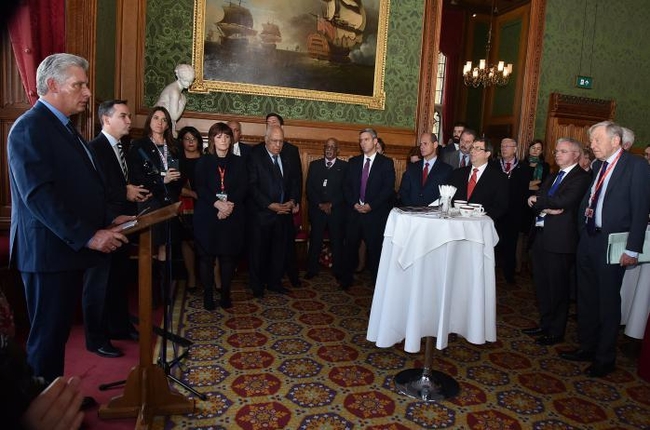 LONDON.- Cuban President Miguel Díaz-Canel Bermudez completed a busy agenda yesterday during a stopover in London, on his way back to Havana, as his international tour draws to a close.
He held a meeting with the Cuba Initiative group which emerged in 1995, as a result of the friendship between Baroness Young and Fidel, to establish a constructive dialogue between the United Kingdom and Cuba. He recalled the founding of the Initiative, which, he said, marked the beginning of a new, stronger relationship between business, education, culture, and sports with the Cuban government and other institutions.

During the evening, he met with activists from the Cuba Solidarity Campaign and trade union representatives, commenting, “We are here to reiterate to the British government that we will make an effort to increase and expand our ties.” He reaffirmed that the U.S. blockade is the greatest obstacle to relations between the two countries and thanked the British government for its support of Cuba’s struggle against the hostile U.S. policy.

The Cuban President concluded, “What we have felt during this brief stay and these meetings is friendship and affection.”