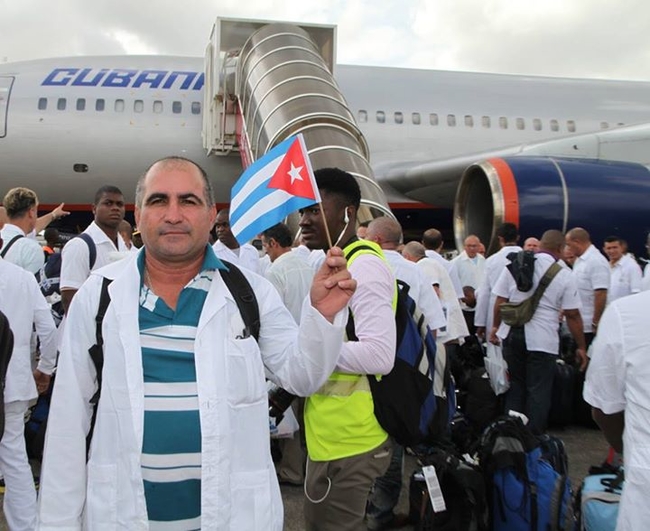 The U.S. Agency for International Development is offering up to $3 million to organizations that would “investigate, collect, and analyze information related to human rights violations – including forced labor – of Cuban medical personnel exported overseas.”
USAID on Monday stated:

The Cuban regime exploits its medical professionals, teachers and other workers, using them to buy international financial and political support and keep its struggling economy afloat, while pocketing the majority of these workers’ salaries and subjecting them to poor living conditions, constant surveillance, and threatening those who wish to leave their mission. At the same time, Cubans on the island struggle to find adequate healthcare and other basic services while the regime touts the false narrative that it has the best medical care in the world.

The agency’s request for applications follows State Department action on June 20 to add Cuba to its blacklist of human traffickers to combat purported “forced labor” in Cuba’s foreign medical mission program.
Cuban President Miguel Diaz-Canel criticized the move as “more lies and slanders.” The medical mission program is an “example of solidarity, humanity and noble and legitimate cooperation between the Southern countries,” he tweeted.

USAID said its goal is to expand “basic human rights for all Cuban citizens.” The agency’s request for applications stated:

USAID seeks applications from organizations with experience in Cuba or similarly closed countries that can develop tools to consistently investigate, collect, and analyze information related to human rights violations – including forced labor – of Cuban medical personnel exported overseas. Information collected should also document the effects of these practices on Cubans on the island. The data collected would be used for advocacy within Cuba, in Latin America and with regional and international bodies, such as the Inter-American Commission on Human Rights (IACHR) and the United Nations Human Rights Council (UNHRC) in an effort to pressure the Cuban regime to improve the living conditions of doctors and other workers, and promote greater respect for labor and other basic human rights for all Cuban citizens.

USAID’s request is linked to a project aimed at promoting human rights and boosting “domestic and international awareness about the realities faced by Cuban citizens.” See “USAID will highlight ‘failures of the Cuban Revolution.'”
The application deadline is Aug. 26. Groups operating in Cuba will not be required to disclose that the U.S. government is financing their work. The agency stated:

USAID marking requirements have been waived for all LAC/Cuba program activities in accordance with Approved USAID Memorandum, “Marking Requirements Waiver for All Cuba Programs.”
Due to the political sensitivity of the USAID Cuba Program, USAID does not require any attribution to USAID or to the U.S. Government in any materials that will be distributed on the island.

I wonder how balanced and objective these investigations will be since USAID has already stated that the goal is to document human rights violations. What happens if the investigators find something good – will they just avoid reporting that?