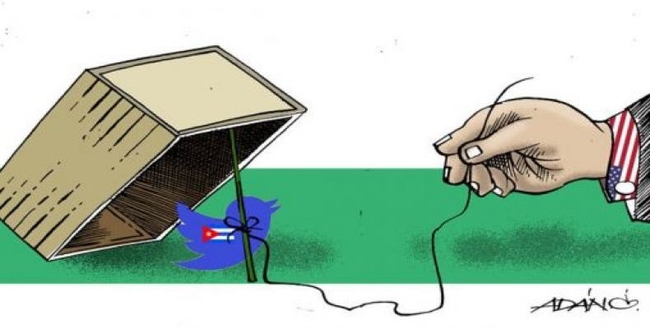 Havana, Sep 12 (Prensa Latina) The Union of Journalists of Cuba has denounced that the accounts of leading Cuban media outlets and journalists had been blocked by Twitter, precisely as they prepared to report on a live television appearance by President Diaz-Canel on Wednesday evening.
The move came as the President appeared on the Mesa Redonda program to inform the population of measures adopted in the face of a severe fuel shortage in the country due to US sanctions. Below is the full statement: Twitter massively censors journalists and media in Cuba On Wednesday afternoon, dozens of Twitter accounts of Cuban journalists and media were blocked by the platform, a few minutes before the television appearance of President Miguel Diaz Canel and other top Cuban government officials began. For an hour and a half, they exhaustively presented exceptional economic measures in response to the intensification of U.S. economic warfare against our country.
As soon as the live broadcast of the program Roundtable began at 6:30 p.m. (local time) and was expected by millions of Cubans, dozens of professionals denounced through Facebook, Whatsapp and other social channels that their Twitter accounts had been suspended. They could access their timeline, but had the options " like", "retweet" and comment were blocked.
Among the media blocked "for violating Twitter rules" are @Cubadebate with almost 300,000 followers and @Granma_Digital with about 167,000 followers, in addition to @MesaRedondaCuba, @RadioRebelde, @DominioCuba, @Cubaperiodistas, @CanalCaribe, among other users, which include active journalists.
Several professionals also warned on Facebook the closure of their channels on Twitter. They suspended, for example, all the accounts of Cubadebate's journalists and directors, without exception, as well as those of Leticia Martínez (@leticiadecuba ) and Angélica Paredes (@aparedesrebelde), of the President's press team; that of the First Vice President of the Union of Cuban Journalists, Rosa Miriam Elizalde (@elizalderosa), and of Granma's journalist, Enrique Moreno Gimeranez (@GimeranezEm), among others.
"It seems to be a concerted operation of false denunciations for abusive use and violation of platform policies. It surprises the political bias, the selectivity of the affected users and the opportunism: when President Díaz Canel speaks," Elizalde wrote.
In addition, the institutional account of the Ministry of Communications (@MINCOMCuba) and that of government officials, such as Yaira Jiménez Roig (@yairajr), director of Communication and Image of the Ministry of Foreign Affairs of Cuba, were also blocked. Also, the director of the National Center for Sexual Education, Mariela Castro Espín (@CastroEspinM).
This is not the first time that Cuban Twitter users report problems logging into their accounts and receive messages that their accounts have been blocked and they should follow the procedure to recover them. What is new is the massiveness of this obviously planned act of cyber warfare, which seeks to limit the freedom of expression of Cuban institutions and citizens, and to silence the leaders of the Revolution.
The State Department's Internet Task Force for Cuba last June issued its recommendations to use the network as a subversion highway in Cuba. It has proposed giving more funds to open digital sites, generate "attractive content" on the net, provide scholarships and finance a cybermilitance trained in harassment, lies and political assassination, which is not usually affected by this type of Twitter actions.
The Cuban Union of Journalists strongly denounces the disappearance of these spaces for the expression of ideas, in an act of massive censorship of journalists, editors and media. We demand the immediate re-establishment of the blocked accounts that, in no case, have violated Twitter policies, while the platform flagrantly tramples on the rights of communicators, prevents them from carrying out their work and tries to muzzle a first-rate news event in our country.
National Presidency of the Union of Journalists of Cuba.