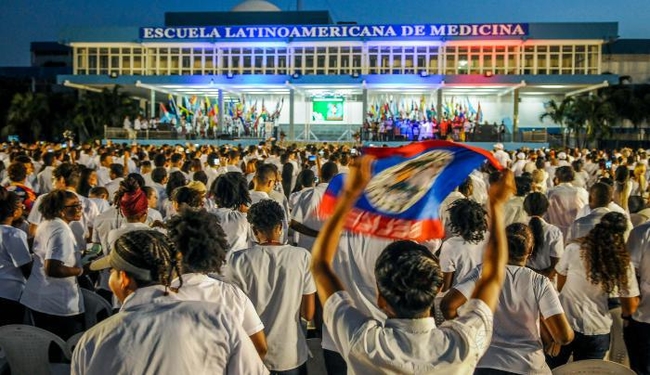 Cuba’s President, Miguel Díaz-Canel Bermúdez, presided the 20th anniversary celebration of the Latin American School of Medicine (ELAM), which he described as “a visionary project founded to improve the quality of life of those who were born and died without having the opportunity to see a doctor.”

Minister of Public Health José Ángel Portal Miranda recalled that, since ELAM opened its doors, the staff has welcomed thousands of low-income youth, who were able to realize their dreams of becoming excellent health professionals.

Portal presented an overview of Cuban medical collaboration and highlighted the work of the more than 400,000 professionals who have provided services in 164 countries over 55 years, and the more than 29,000 working in 65 nations today. He recalled the emergence, in 2003, of the Barrio Adentro program in the Bolivarian Republic of Venezuela and Operation Miracle, to return sight to more than three million people in 35 countries; the cooperation provided to Haiti following the 2010 earthquake, and the confrontation with cholera; as well as the work of 28 Brigades from the Henry Reeve Contingent in 21 countries, including the struggle against Ebola in West Africa.

He continued highlighting, “The social impact of programs like the effort to care for victims of the Chernobyl nuclear disaster, with more than 26,000 patients treated, mostly children; the genetic and psycho-social study to evaluate more than 1,200,000 individuals with disabilities, in six ALBA member countries; and the Mas Medicos program in Brazil, which ensured access to health services for more than 60 million people.” ELAM rector, Dr. Antonio José López Gutiérrez, in his remarks, said that the institute of higher learning is an example of solidarity and internationalism, which promotes the concept that “the patient is not a client, nor is medicine a commodity.”

Cuban Communist Party Political Bureau members Roberto Morales Ojeda, a Council of Ministers vice president, and Ulises Guilarte de Nacimiento, secretary general of the Federation of Cuban Workers (CTC), also attended the event, during which Dr. José Miyar Barruecos was awarded an honorary doctorate, for his dedication to projects that have made medicine a life-defending science, and the university was granted the CTC’s 80th anniversary commemorative distinction.

- Some 6,848 graduates have earned advanced degrees in Comprehensive General Medicine and 2,135 in other specialties.

- Graduates have provided support in the wake of many natural disasters including those in Haiti, Mexico, Guatemala, Chile, and the Amazon.

- An important group of graduates have participated in Operation Miracle in several nations, in conjunction with Cuban medical brigades.

- ELAM has been recognized by the Pan American Health Organization

- Sixty percent of the faculty hold advanced degrees, and 35% have science doctorates.