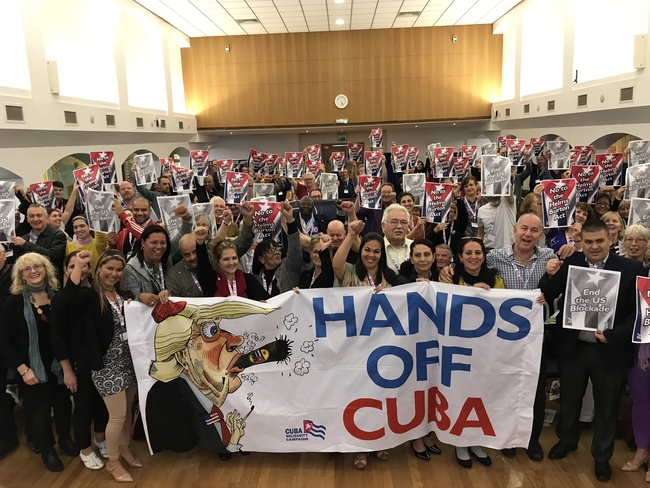 On Saturday 2 November, more than 200 trade unionists and activists attended CSC’s Unions for Cuba conference at the NEU headquarters in London. The vibrant conference, the largest trade union conference of solidarity with Cuba to take place in the UK for 15 years, demonstrated the strength of solidarity between British and Cuban workers.

Cuba’s delegation comprised of 14 labour movement leaders – 12 of whom were women – representing the country’s health, public administration, communications, transport, education, energy and mining sectors, and their TUC equivalent, the CTC.

British trade union speakers included general secretaries of Unite the Union and the CWU, Len McCluksey and Dave Ward, the Cuban, Nicaraguan, and Venezuelan ambassadors, and contributions from many other trade unionists, labour movement and student representatives, and academics.

Sue Michie, Vice Chair of CSC opened the conference, addressing delegates of the “crucial time for solidarity with Cuba” that we are currently in.

“But I must stress that I will vote to abolish the Lords at the first opportunity!” she said to great applause.

Bernard Regan, CSC National Secretary highlighted some of Cuba’s many achievements over the last 60 years “Cuba has three times the amount of doctors per 1,000 to its population than Britain.

“400,000 health professionals have travelled across 165 countries in all the continents of the world delivering health care” he added.

Maggi Ferncombe, UNISON Greater London Regional Secretary said: “From a union of a million women - I give particular greetings to the 12 Cuban women trade unionists here today” to great cheers from the crowd.

Cuba’s “collective achievements are unbelievable” she said: “Their health system, their education systems, their long life expectancy, and the four million people whose sight has been restored in Operation Miracle”, were among the examples she outlined. Maggi outlined the importance of international solidarity with Cuba and urged all trade unionists to “affiliate your trade union branches to CSC on Monday!”

Carmen Rosa López Rodríguez, Deputy General Secretary of the CTC put Cuba’s achievements into a global context: “Free education, free health, social security - these are achievements that the Cuban people have, despite the huge difficulties from the blockade, that so many people all over the world don’t have.”

Len McCluskey, Unite the Union General Secretary spoke of the great achievements of the Cuban Revolution over the last 60 years: “the issue that most keenly matters to me is the development of labour rights in Cuba. From trade union activists being tortured and executed under Batista, today workers and their unions organised by the CTC have a special place in Cuban life.

“Workers and their unions have to be fully consulted and involved in decision making at workplace level. The CTC and its affiliates are included in the great economic decisions that have to be made by the government”, he said.

McCluskey ended his speech with a powerful anecdote on the crucial importance of Cuba in the region:

“Some years ago, before the time of Evo Morales, a leader of the Bolivian trade unions came to visit our office. “What would you say is the most important task?” he was asked.

“The defence of Cuba” was his reply.

“Comrades, we can demand of ourselves nothing less than that.”

In a seminar on the impact of the blockade, Pete Kavanagh, Unite London and Eastern Regional Secretary said: “The blockade is extraterritorial - Unite represents workers in the finance sector - we often hear stories of banks getting huge fines for working with Cuba.

“We also represent Virgin Atlantic workers who fly regularly to Cuba. But you can’t book flights to Cuba now as their website uses US Delta technology”

Santiago Badía Gonzalez, general secretary of the Cuban Health Workers Union, the largest trade union with over 460,000 members, said: “We see health as a fundamental right. We have an infant mortality rate of 4.0 per 1,000 live births – which is superior to our neighbouring countries who want to strangle us with their blockade.” He outlined some of the reasons behind Cuba’s impressive on infant mortality – including that pregnant mothers have an average of 15 consultations during pregnancy, several times higher than the rate in Britain.

GMB official Ross Holden chaired a session on Cuban Futures. He recalled his experience on the Young trade Unionists’ May Day Brigade to Cuba, where he said he saw how “Socialism is so vibrant in Cuba, despite all the challenges that they”.

Iris Lorenzo, a CTC ‘innovations and rationalizes’ official – a department which works with the trade unions around the best ways of working around blockade difficulties said: “Young Cubans don’t know anything other than blockade. We were all born under this policy which has tried to exterminate us over the years. And despite the blockade, we will never close our schools, close our hospitals or ever give up - we will never surrender our sovereignty nor ever grow tired of renouncing the blockade”.

Luis Castanedo Smith, CTC Regional Secretary outlined how the Cuban trade unions played an important role in the Cuban labour code legislation and our new constitution which was approved this year. On the difficulties the trade union face due to the US blockade, he described the high costs of transport, loses in the exchange rate, and various other sorts of commercial factors that impact the Cuban economy due to the blockade.

Jessica Sangha, a Unite North East Yorkshire and Humberside delegate on this year’s young trade unionists’ May Day brigade, spoke of her experience: “Cuba opened my eyes -we just need to spread the word that another world is possible and Cuba is the example of that”.

In a rally on Latin America, Dave Ward, CWU General Secretary said: “Let’s hope we can resist US intervention in our NHS the same way that the Cuban people have resisted US intervention and the blockade.

“We will take inspiration from Cuba’s struggles. Your struggle is our struggle. Your values are our values. And your music is definitely my music!”

Marcus Barnett, Young Labour International Officer, gave a barnstorming speech of the sprit of resistance to US imperialism in Latin America. “In Chile, Haiti and Ecuador we are seeing trade unionists, campesinos, students, indigenous populations, the impoverished, the retired, rising up to say no to neo liberalism, no to inequality and yes to sovereignty and dignity.

“There is a new wave of popular support against the neoliberal model which has been led by the Trump administration with its imperialist advances in Latin America and their threats of aggression and intervention against any country that does not capitulate” he said.

Santiago Badía Gonzalez said how “the US invests millions of dollars trying to undermine our internationalism. They try to say that our 20,000 medics in Venezuela are the army in disguise! They don’t undetermined the philosophy of solidarity and altruism.”

Delegates all had the opportunity to ask questions and get to know more about the daily lives of the Cuban trade union guests during more small ‘Intercambio’ sessions with each of the Cuban guests.

Alba de la Caridad Estévez Novo, National Executive Member of the Communication Workers union spoke of how the Revolution gave her so many opportunities in life. She described her humble upbringing, without a father and with a young mother, her grandmother’s pension was the only income for her family. She described how the Revolution has given her education, health and housing that she needed to thrive.

Miriela Padrón Macías from the public administration workers’ union was asked about what type of problems her members came to her with. She said the issues which she deals with are often the difficulties people have carrying out their jobs due to the blockade, which means there are insufficient modern computers which impact her members in banking and administration particularly, but also in other sectors where people often have problems the ‘tools for the job’ in sufficient numbers or of sufficient quality.

She also explained how regular trade union meetings that are held in workplaces to hold the management to account are taken on full pay.

Delegates participated in a solidarity photo, where they held signs which read “End the US blockade” and “No to the Helms-Burton Act” and CSC’s Trump: “Hands off Cuba” banner was held by the Cuban trade unionists. The solidarity photos were sent to Cuba, which on the same day, was hosting an Anti-imperialist Meeting of Solidarity, for Democracy and against Neoliberalism conference in Havana.

A declaration was also agreed by Unions for Cuba delegates, which sent fraternal greetings to the conference taking place in Havana. The Cuba Solidarity Campaign sent representatives from its national executive to this meeting and the declaration stated that “ we stand united with you against the current imperialist offensive against Cuba and other progressive causes in the region.”

During a barnstorming closing rally speech, Gawain Little, Chair of the National Education International Committee said: “Our NEU members who visit Cuba on delegations come back inspired by what they see in Cuba, which achieves so much despite the blockade.

“But they ask also ask ‘Why?’ Why would the richest country on earth blockade Cuba?

“But a moral threat – the threat of an alternative. It’s a fundamentally different way of organising society. It’s a shining light in a world dominated by capitalism - it puts the people first.

CSC Director Rob Miller gave a summary of the year of Cuba60 events which CSC has organised, including the young workers UK tour in March, the Medical Internationalism Tour in June, the visit of CTC general secretary Ulises Guilarte de Nacimiento for the TUC Congress where he was the keynote speaker, amongst other events.

“Just last week Trump stopped Cuba from being able to lease aircraft from the US. He’s stopped nine different US-Cuba flight routes. He’s stopped the Cruise ships that were on their way to the island. These are dangerous and difficult times for Cuba,” he explained.

Miller outlined the numerous ways in which the extraterritorial blockade impacts Britain, including the Open University ban on Cuban students in 2017 which CSC led a successful campaign with the British trade unions to overturn the ban.

Diana Holland, Unite Assistant General Secretary and Chair of CSC said: “As a woman trade union leader here it is a pleasure to welcome such a large delegation of women trade unionists. And perhaps it’s an example to some in our movement that it is possible to have an international delegation with such a large percentage of women!”

Carmen Rosa López Rodríguez, ended the conference with a demand: “We beg you, ask you and call on you to increase your level of solidarity” she said.

Carmen awarded Rob Miller with a medal from the CTC, in a testament to the solidarity that Cuba has received from CSC and the British trade union movement.

"We are handing over the medal to Rob, but really it is in recognition to all of you for all the work that you done for Cuba, in recognition of Cuba, and that you will continue working on into the future, because, working together, a better world is possible” she said.

CSC would like to thank the trade unions who invited and hosted Cuban trade union guests for the conference: Unite national and London Eastern Region, UNISON national and North West, Scotland and Wales, ASLEF, CWU and NEU and to all the regions and unions that welcomed them during their stay.

We would also like to thank all the unions from national, regional and branch level and organisations and individuals who made the last year of Cuba 60 events possible:

Read the Morning Star report from the Conference here