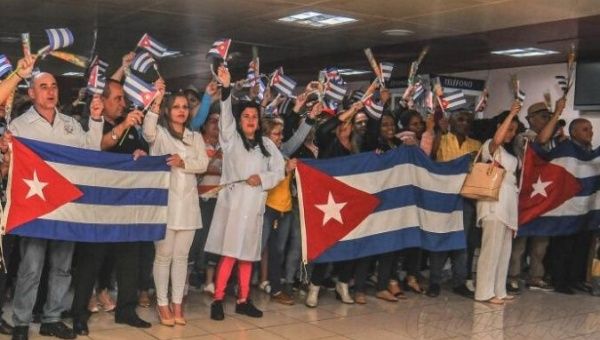 Around 700 Cuban doctors have now returned from Bolivia

In more than a decade, health professionals carried out more than 1.5 million interventions and more than 72 million medical consultations.

Cuba's Minister of Foreign Affairs Bruno Rodriguez received Wednesday the last group of 228 Cuban doctors who were offering their services in Bolivia but had to leave due to harassment against hem and violence in the Andean nation.

"It is an honour to participate in the welcoming of the last flight of 228 collaborators from Bolivia, who arrive in Cuba with the certainty that the Homeland proudly welcomes them, for their worthy and self-sacrificing work performed," said Rodriguez.

While President Miguel Diaz-Canel publicly recognised the astounding work carried out in the Andean country by the Cuban medical brigades. In more than a decade, health professionals carried out more than 1.5 million interventions and more than 72 million medical consultations.

"It remains as an indelible mark the devotion, human solidarity, the lives saved, grateful patients and eternal love. We are Cuba, we are continuity,” said the head of state.

The doctors were forced to abruptly interrupt their work due to the lack of safety as right-wing violence and repression escalate in Bolivia, part of the coup perpetrated against President Evo Morales.

Cuban doctors return to their country by groups, after the de facto Bolivian government investigated them for "encouraging and financing" the massive demonstrations demanding Morales' return and the restoration of the constitutional order.

A first group made up of 224 professionals arrived in Cuba last Saturday, where they were received as heroes after their valuable work in the South American country. While another flight carrying 207 doctors arrived on Sunday.

“You are missionaries of life, who only have love to oppose hatred. Welcome back," Diaz-Canel said during his welcome speech.

In a similar fashion, the departure of Cuban doctors from Brazil earlier this year saw severe consequences for that country’s most vulnerable population as the government of far-right President Jair Bolsonaro struggled to fill up the vacuum left by the physicians; El Salvador is another country that halted the medical programs with Cuba, followed last week by Ecuador.