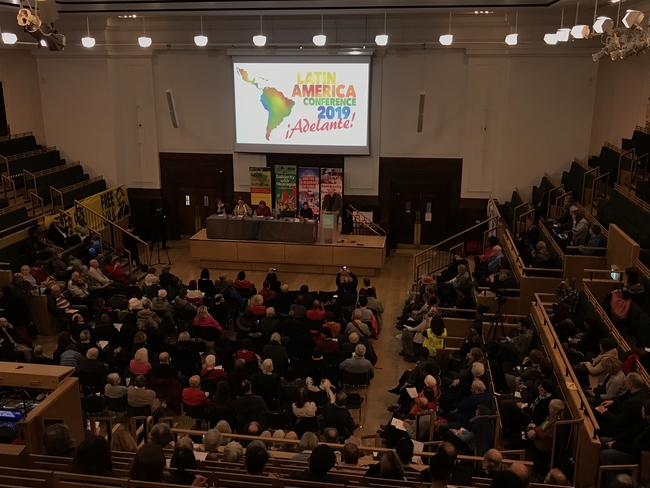 I want to start by saying that what is going on today in our Americas is an expression of the failure of the policies of inequality, exclusion, exploitation, plunder, injustice, discrimination and underdevelopment. It is a failure of neoliberal capitalism.

I think that there is a lot to reflect on and have clarity over in order to better face this escalation of aggressive imperialism. First it requires meditation and reflection, and then organisation and preparation. We are revolutionaries. We do not believe in miracles, nor in political spontaneity. Revolutions are not just done spontaneously they have to be prepared and organised.

As Noam Chomsky has said just recently, US imperialist hegemony, is a combination of force and consensus. Bombs start falling when ideas start failing. Today that hegemony is not only military and economic, it is also maintained through information and culture. To face such a sophisticated domination, progressive forces must learn how to organise, how to express that accumulated indignation of the people. We have to prepare for the moment when we can make changes.

Today we believe that progressive forces have two main challenges: firstly maintaining unity and secondly the challenge of creating cultural awareness. Fidel, Chavez and Daniel have always insisted on unity. Unity is indispensable. As Cubans say, we need to add all friends to this battle. We need to get rid of all sense of division. We need to add as many friends as possible knowing that we have a common enemy that is imperialism.

The other challenge we have is to get as much experience as possible in terms of raising cultural awareness of people. The importance of culture can not be underestimated. Culture can be used as an instrument to dominate. A way to consolidate true emancipation is through cultural liberation. There can be no liberation or true emancipation without cultural liberation. There is no freedom without cultural emancipation. It is why capitalism spends so much money on publicity, communication, television, video games and social networks.

Today the struggle has a strong cultural element. This is a main block on progress. As Chomsky said we need to win cultural hegemony to make progressive processes irreversible. We have to create consciousness within the people. It is not enough to make a change in only the living conditions of the people.

Why does this happen? The cause is cultural. It is because we haven’t been able to transform the consciousness of the people. We have believed that the changes to living conditions alone have been enough to liberate those people, but at the end of the day many people still have the consciousness to live as a capitalist.

For us the real change is a change in consciousness. We need to be able to win a political guarantee. As Fidel, Chavez and Daniel did over many years. We need to win this hegemony across society. That is what makes the processes irreversible.

I was recently in a forum in Sao Paolo and Comandante Lorena Peña said something important there: ‘how is it that they are winning the battles online today with twitter instead of with weapons’. We have to spread our own truths using our own products. We have to communicate with as many people as we can, we have to mobilise as many people as we can. Our social processes are better than those of capitalism. They are more just. But they must also be seen to be more just. Therefore the media battle can not be underestimated.

Speaking about the Cuban revolution. It is itself a cultural fact. The first thing the revolution did was the literacy campaign. We used to have one million illiterate people out of a population of around six million. The revolution allowed everyone to enjoy the cultural experience. We had to create an audience for culture. For us it wasn’t just about changing the structure of the country or the government, it was also about changing the consciousness and the minds of the people.

It is a culture of solidarity, of humanity, and not one of dehumanisation or the craze for war and weapons. It is a culture against discrimination, against differences, against individualism and a selfishness that are promoted by capitalism.

The Cuban revolution gave us another vision of the world. What the Cuban people have achieved today is due to that cultural transformation.

As Fidel himself said ‘the revolution will not be defeated by force nor by seduction’.