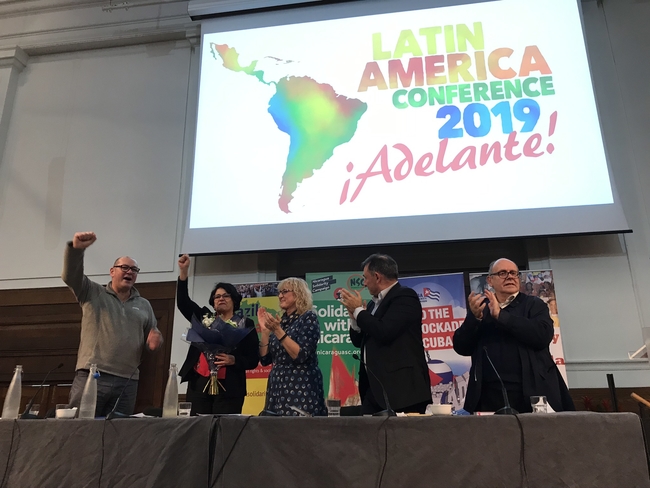 Over 500 activists attended this year’s crucial Latin America Conference at Friends House in London. The weeks leading up to the conference saw huge turbulence in the region, including the military coup in Bolivia which ousted President Evo Morales; a million Chileans were on the streets to protest against the billionaire president Piñera, as well as huge protests in Haiti, Ecuador and Colombia against their governments. In addition there has been increased intervention from the US throughout this year, meaning that this is a key time for solidarity with progressive social movements in the region.

As well as attending a range of 24 seminars options, rallies, workshops and film showings throughout the day of solidarity, delegates browsed solidarity stalls from various solidarity campaigns, book stalls and progressive organisations.

CSC National Secretary Bernard Regan opened the conference with a reference to Donald Trump’s attack on socialism at the United Nations and the Cuban President, Miguel Diaz-Canel’s, response, who said how inequality and poverty around the world “are not the result of socialism, as the president of the United States claimed…. They are the consequences of capitalism, especially imperialism and neoliberalism.”

Regan called on all delegates to build support for the demonstration against the visit of Donald Trump on 3 December and show our solidarity with progressive forces in Latin America.

Argentinean trade union leader Edgardo Llano noted how “Today we have a victory - a victory in Lula’s freedom. But that victory is not enough. We need to see all our leaders freed.”

He said how US used to send their troops to Latin America whereas now their tactics have changed but the goal of getting hold of the region’s natural resources remains the same, including lithium in Bolivia, oil in Venezuela and water in Paraguay.

“Cuba is the lighthouse on the continent” he said: “It’s defended its sovereignty its dignity and its independence throughout this period of US intervention”.

Morning Star editor Ben Chacko said: “Latin America’s people are in revolt at the movement” and referenced the slogan used on the streets in Chile which has inspired people around the world: "neo-liberalism was born in Chile and it will die in Chile".

Chacko highlighted the huge numbers of deaths of trade unionists and activists in Colombia “where is the media or OAS outrage about this?” he asked.

Shadow Justice Secretary Richard Burgon MP was due as a speaker but due the snap general election being called, he could not be there on the day. However, the Labour Shadow Cabinet member did sent a video message to the conference, where he said how “the targeting of progressives in Brazil and Bolivia reminds us that you can't be a socialist without being an internationalist. Let's campaign for an anti-war government that will speak up for Latin America.”

Miriam Amancay Colque of Bartolina Sisa Reistance, who recently returned from Bolivia, took to the podium waving the Wiphala indigenous flag. She said how “this conference comes at a crucial time. I went home to Bolivia to see a victory for our people (in the recent presidential elections) and witnessed a vicious reactionary coup”.

“Bolivia flourished under Evo Morales. Our country used its natural resources. And after five centuries of being dominated by elites mostly of European decent, for the first time I could see my country in all its diversity, a plurinational state.

"As our great ancestor Tupac Katari once said: “We will return — and we will be millions!” We are here and we are millions. And we refuse to hand over our lithium, our richness, our homeland over to the descendants of the colonial invaders and the Yankee imperialists who attack out lives with destruction, displacement and exploitation" she said to an emotional standing ovation.

In Conversation with Naom Chomsky

Chomsky asserted how the US role in helping bring about the destruction of the Amazon through its support for 'regime change' in Brazil should be seen as amongst the greatest crimes in its history.

“We face a historic threat to the future of our civilisation: and the world's most powerful country, the United States, is racing to push us off the edge of the cliff”, he outlined.

Chomsky also pointed out the injustice of the link between US foreign policy in countries like Honduras and its treatment of migrants.

Rocio Maniero said how the annual Latin America conference is the most important meeting of solidarity in Europe. “We need European solidarity with us” she urged.

The Ambassador said how Chavez started the ‘missiones’ to address problems like illiteracy in the country 20 years ago “Inclusion was central to everything that Chavez did.”

In reference to the difficulties Venezuela has experience in recent years, including relentless US attacks and sanctions, she said: “The response to all our problems is unity”.

Raquel Dixon how in Nicaragua “We are focused on ensuring that the formal rights of citizens can be exercised in practice: that's why we have invested to transform health and education in our country.”

The Cuban Culture Minister Alpidio Alonso Grau, said how the first programme the Cuban Revolution launched was to end illiteracy: “the process wasn't only about a change of government, but to liberate the minds of the people. We didn't tell people to believe, but to read.”

He explained, “What has been at the heart of the sustained success of our Revolution is building a culture based not on dehumanisation and weapons but solidarity. We must build solidarity with all those fighting for a better world!”

Spanish MP and PCE General Secretary Enrique Santiago said how the arrival of Trump has shifted US policy in Latin America and that “We need an alliance of trade unions and social movements here and in Latin America to oppose the policies of Trump”.

“ELAM has now trained over 30,000 medical students from all over Latin America, the Caribbean, Africa, Asia and even working class students from the United States - all completely free of charge.

“This is an incredible achievement for any country on earth. But when you put it into context that a poor, blockaded country, with few natural resources, can train 30,000 medics from all around the world, totally for free, it really is remarkable.”

Teresita Vicente, Cuban Ambassador, was the final speaker of the closing rally at her last Latin America Conference. After over five years in Britain, she will soon be returning to Cuba.

Diana Holland, Chair of CSC and Assistant General Secretary of Unite, presented Her Excellency with a bouquet of flowers to thank her for all her work during her time in Britain. Teresita received a standing ovation on receiving the flowers, before taking to the podium where she said:

“We are convinced that only socialism can bring social justice for all” the Cuban Ambassador said and urged solidarity in light of US intervention in the region. “The most racist, rancid, reactionary forces in Latin America have found a staunch ally in Donald Trump,” she added.

“We will always stand by our principles of solidarity and anti-imperialism. A better world is not just possible but vitally necessary: ever onwards to victory!”

More photos from the conference are online here

The Speech by Alpidio Alonso Grau, Cuban Minister of Culture is published in full online here