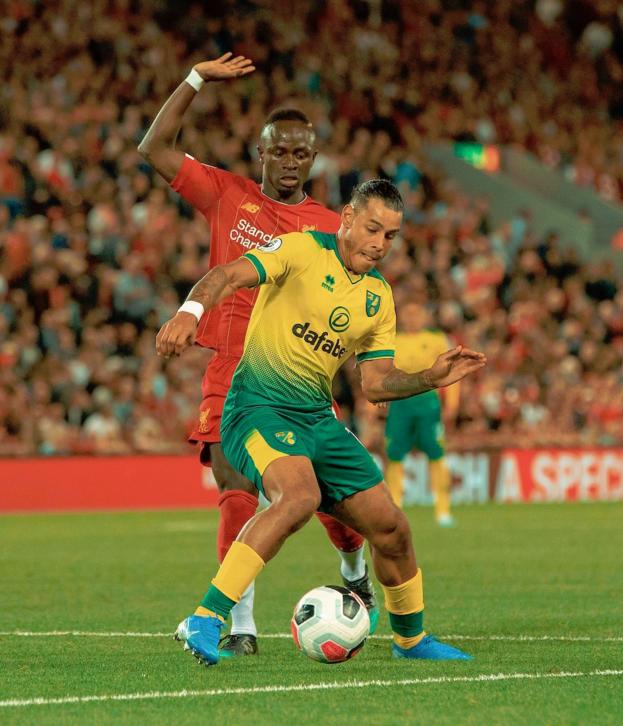 Onel Hernandez made history in his Premier League debut against Liverpool

History was made on Friday August 9 when Onel Hernandez became the first Cuban born footballer to play in the Premier League as a substitute for Norwich City in their 4-1 defeat against Liverpool at Anfield.

Hernandez, who plays as a left winger, replaced Tom Trybull in the 70th minute to confirm Cuba as the 114th different country represented in the Premier League since its foundation in 1992. Hernandez was unable to inspire a Norwich revival after four first half goals from the European Champions.

However only days later his Premier League debut 26 year old Hernandez suffered a knee injury following a fall down the stairs at his flat ruing him out of action for three months. Hernandez has subsequently missed victories over Newcastle United and champions Manchester City as well as defeats at West Ham, Burnley and Crystal Palace. However on returning to the Norwich side in October he also became the first Cuban player to score in Premier League netting the Canaries consolation in a 3-1 home defeat against Manchester United.

Since his return in October Hernandez has become a regular feature in the Canaries starting line-up as they battle to retain their Premier League status including a cruicial win at Everton and a battling draw against last season's champion's league runners up Tottenham Hotspur. Hernandez also added an assist to his name setting up Norwich's second goal against Arsenal during a 2-2 against Arsenal at Carrow Road on 1 December.

Hernandez was born in the city of Moron in central Cuba in 1993 but spend most of his childhood growing up in Germany after moving there with his mother at the age of six. During his childhood he was introduced to football by his German stepfather a coach at TuS Westfalia Neuenkirchen who felt it would help him integrate better into German society.

In October 2010 Hernandez made his professional debut for Arminia Bielefeld in the German second division who were then coached by former German International and Tottenham full back Christian Ziege.

Hernandez subsequently played for Weder Bremen and Wolfsburg reserve teams as well as Eintracht Braunschweig before joining Norwich City in January 2018 for an undisclosed fee on a three and a half year deal.

Hernandez made his debut in a 1-0 home win over Middlesbrough and made 12 appearances in his first half season at Carrow Road as the Canaries finished in a disappointing 14th place.

However Hernandez scored twice in the opening game a draw at Birmingham City and scored 6 more league goals throughout the season in 39 appearances as Norwich were crowned EFL Championship champions and returned to the Premier League after a 3 year absence.

Although he represented Germany at under 18 level against the Czech Republic in 2010 Hernandez has retained a Cuban passport and has always hoped to represent Cuba at international level.

It looked like this might be become a reality in November 2018 when Cuban coach Raúl Mederos called up Hernandez for a fixture against the Dominican Republic. However the offer later had to be withdrawn in line with regulations prohibiting overseas players from representing Cuba.

It is also family circumstances and his emigration to German that gave Hernandez the opportunity to play professional football. In Cuba following the revolution no footballers were allowed to sign full time contracts from 1961 to 2016 a policy linked to Fidel Castro’s decision to ban professional sport.

Baseball and Boxing have long been seen as the major sports in Cuba. However the Leones del Caribe( Lions of the Caribbean) as the national team are known became the first Caribbean nation to qualify for the world cup in 1938( they narrowly failed to qualify in 1982) won gold at the 1970 Central American and Caribbean games after an intensive six month tour in North Korea and were Quarter Finalists at the 1980 Sumer Olympics in Moscow. More recently they won the Caribbean Cup in 2012.