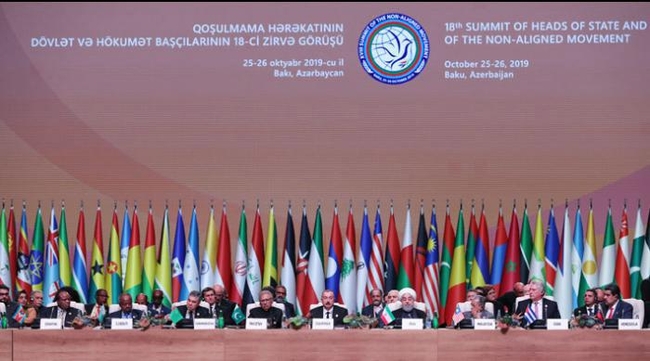 The President of the Republic of Cuba, Miguel Díaz-Canel Bermúdez, is participating in the videoconference this morning, May 4, accompanied by Foreign Minister Bruno Rodríguez and José Ángel Portal Miranda, minister of Public Health.

The Non-Aligned Movement (NAM) Virtual Summit "United against COVID-19" is being held this Monday, May 4, via videoconference, chaired by Azerbaijani President Ilham Aliyev. The meeting is taking place in the format of the Contact Group, which includes regional representatives.

The Republic of Azerbaijan convoked the meeting as president of the Movement for the period 2019-2022, given the need for concerted and effective responses to current global challenges.

According to AzerNews, the head of the Presidency’s Foreign Policy Affairs Department, Hikmat Hajiyev, emphasized the importance of strengthening international solidarity, and mobilizing efforts of both states and international organizations in the COVID-19 battle.

"We hope the NAM Contact Group Summit will make a significant contribution to the mobilization of efforts, strengthening solidarity and multilateralism among member countries in the fight against the new coronavirus," stated Hikmat Hajiyev, as reported by the source.

A communiqué issued by the Coordinating Bureau of the Non-Aligned Movement, March 25, 2020, in New York, expressed "concern over the rapid spread of COVID-19, which poses a major challenge to humanity" and noted "in the face of this type of global emergency, a spirit of solidarity must be at the heart of our efforts.”

Another NAM communiqué released April 9, 2020, extends the organization’s full support to the World Health Organization (WHO) and the leadership of its Director General, Dr. Tedros Adhanom Ghebreyesus.

“It is time to avoid the politicization of the virus and to set aside all political ideologies and discrimination for the good of humanity; it is time for global unity and the redoubling of international solidarity and multilateral cooperation to ensure that that our common enemy, COVID-19, with serious health and socio-economic consequences, is defeated sooner rather than later," the document states.

The President of the Republic of Cuba, Miguel Díaz-Canel Bermúdez, will participate in the videoconference this morning, May 4, accompanied by Foreign Minister Bruno Rodríguez and José Ángel Portal Miranda, minister of Public Health.