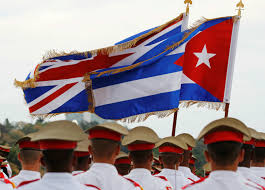 The British government reiterated its opposition to the US blockade of Cuba in a reply to a parliamentary question on 18 May.

Wendy Morton, Parliamentary Under-Secretary for the Foreign and Commonwealth Office said that US counterparts were “aware of our opposition to the embargo” and that the British government was “working actively with the Cuban Government” to “support UK companies wishing to do legitimate business with Cuba.”

The statement was in response to a parliamentary question from Grahame Morris MP, Chair of the All Party Parliamentary Group on Cuba. Mr Morris, Labour MP for Easington had asked the Foreign Secretary Dominic Raab, if he would “make representations to his counterpart in the US administration on the (a) blockade and (b) restrictions of covid-19 medical resources and humanitarian assistance to Cuba.”

Replying on behalf of the government, Wendy Morton MP said: “The UK Government does not support the US embargo against Cuba. We consider the extraterritorial impacts of the embargo, including those on UK companies, to be contrary to international law, and we are not persuaded that these sanctions encourage potential reforms and economic progress.

“We are in regular contact with our US partners, who are aware of our opposition to the embargo. We communicate this both privately, and through our public statements. The United Kingdom unfailingly votes in favour of the annual United Nations General Assembly resolution calling for an end to the economic, commercial, and financial embargo. We have been working actively with the Cuban Government and other organisations on ideas to reform the business environment, and provide direct support to UK companies wishing to do legitimate business with Cuba.”

The question was a follow up to one asked by Mr Morris on 4 May regarding UK aid to the island during the coronavirus pandemic.